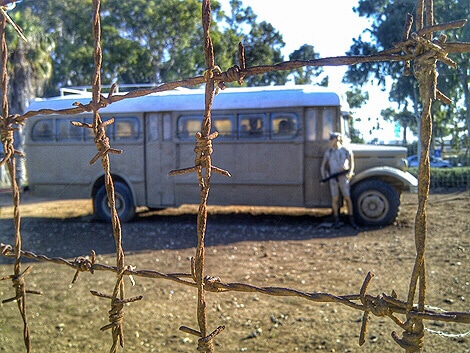 Located about 12 miles south of Haifa, Atlit Detainee camp was established in 1938 by the authorities of the British Mandate for Palestine. Its main purpose was to detain Jews attempting to reach the Land of Israel, as part of their policy to limit Jewish immigration to Palestine.

Today, the site is a museum presenting the history of the camp, and the Jewish clandestine immigration (‘Ha’apalah’) during the British Mandate period.

In sharp contrast to the 1917 ‘Balfour Declaration’, from the 1920s, the British authorities led a clear opposite policy. Jewish immigration was heavily limited, as well as Jewish ability to buy land, and protect themselves from Arab attacks. Furthermore, when the Arabs began “the big revolt” in Palestine (1936-1939), the British, in attempt to appease them, created Atlit Detainee camp. Jews trying to escape from atrocities of the Nazis in Europe found themselves behind barbed wire and watchtowers again, and even forced into showers upon arrival. For more than a decade, about 40,000 Jewish refugees were incarcerated in this camp, along with Jews who fought the British rule.

The Camp Turned into a Museum

The camp operated till the end the British Mandate, in 1947. Later, the state of Israel used it as a military prison and as a Jewish immigration temporary camp (M’abarah). In 1987 Israel decided to convert the camp to a museum. Several wooden barracks were reconstructed as well as the dreadful disinfection showers and some of the barbed wire fences. One barrack presents a movie of the daring Jewish break into the camp in 1945.

The 1945 Break into Atlit Camp

In 1945 the British captured 40 Iraqi Jews refuges who managed to sneak into Palestine. They were detained in Atlit but were intended to be sent back. Facing a death penalty in Iraq, the Jewish Haganah decided to rescue them, and try to empty the camp as well. On the night of October 10th, 1945, a Palmach force broke into the camp and successfully freed 208 detainees. The daring infiltration was planned by Yitzhak Rabin and commanded by Nahum Sarig. Following this event, the British deported some Jewish immigrants to internment camps in Cyprus.

Another barrack operates as a computerized data center, where visitors can browse and even contribute family stories. In 2010 and old Latvian fishing boat was placed in the grounds of the site. Its internal spaces were turned into a moving audio-visual simulation of the perilous sea journey of the Jewish refugees escaping Europe. Near it, a C-46 commando transport aircraft presents its use to bring Jews from Italy and Iraq in 1947.

The site is open Sunday to Thursday from 9:00 to 17:00, and on Friday till 13:00. Touring the site is done by joining a guided tour that should be reserved.

A tour of Atlit Detainee Camp can be combined with in a day tour in the area.

Contact us to inquire more about a private tour Atlit Detainee Camp: