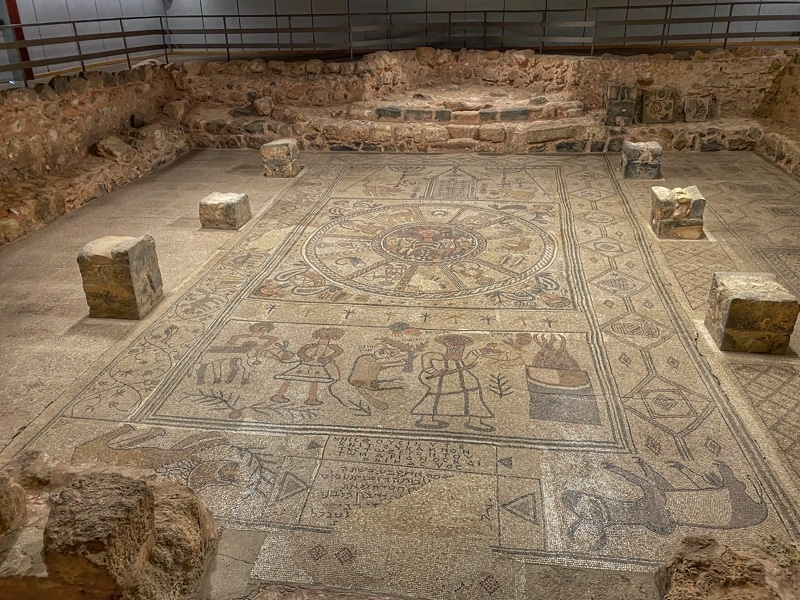 Set on the tranquil grounds of Kibbutz Hefziba, the Beth Alpha synagogue is one of the most puzzling archaeological discoveries ever made in Israel. Despite Rabbinical ban, its ornate mosaic floor bears figurative art, and even pagan symbols, whose exact meaning remains a mystery to this day.

The Discovery of Beth Alpha Synagogue

The Beth Alpha synagogue was discovered by chance by Hefziba Kibbutz members in 1928, while digging for a new dining hall. The excavations, led by archaeologist E.L. Sukenik from the Hebrew University, uncovered a synagogue whose main prayer hall bears a colorful mosaic floor with images set in three distinct panels. At the southern end, two images of a Menorah flank an ark. Beneath them two lions stand next a shofar, a Lulav, and an incense shovel. Near the entrance, a simplified yet clear image of the offering of Isaac is presented. Abraham has his hand raised, yet above him, the hand of God appears, commanding him to stop (Genesis 22:12). the main centrepiece presents the 12 signs of the Zodiac around the sun god, Helios, riding his four-horse chariot (quadriga) across the sky. The combination of clear Jewish and pagan symbols, and figurative art, were a total surprise at the time of their discovery. Today, such combinations are known from more sites in Israel (cf. Sepphoris, Hamat Tiberias, and more). However, their meaning is still being debated among scholars. An Aramaic dedicatory inscription near the entrance indicates the floor was installed around the time of Emperor Justinian I, in the early sixth century CE.

Today, the site is a national park. It is open every day of the week and charge an admission fee. An audio-visual presentation projected on the mosaic floor is very helpful to discern all its details. It presents daily life in the ancient village, the making of the mosaic, and its artistic style.

A tour to Beth-Alph Synagogue can be combined with in a day tour in the north.

Setting a Bar-Mitzvah in Beth-Alpha Synagogue

The Beth-Alpha synagogue is covered and air-conditioned, with a wooden deck set around the mosaic. This makes the site a comfortable choice for an intimate Bar-Mitzvah event, especially in the hot summer months. Furthermore, its combined pagan scenes and figurative art demonstrate well the more liberal attitude of Rabbis in the past. This makes Beth-Alpha synagogue a perfect choice for a Bar-Mitzvah or Bat-Mitzvah event, for Jews of all denominations. It connects the child’s festive day to Judaism in the past in such a remarkable and tangible way.

Contact us to inquire more about a private tour to Beth-Alpha Synagogue: