Cave of the Patriarchs, Hebron

By Jewish tradition, the Cave of the Patriarchs (known also as “Cave of the Machpela”), is the burial plot of Adam and Eve, Abraham and Sarah, Isaac and Rebekah, and Jacob and Leah. Being the patriarchs of the Israelites, the cave of Machpela is the holiest tomb complex in Judaism, revered also by Christians and Muslims.

History of the Cave of the Patriarchs

The book of Genesis records Abraham purchasing a burial plot at the “edge of a field” in the outskirts of Hebron, then a Canaanite city (Genesis 13:8). The plot would eventually be used for the burial of Sarah (13:19), Abraham (25:8-9), Rebekah (50:13), Isaac (35:27-29), Jacob (50:12-13), and Leah (50:13). Jacob’s second wife, Rachel, who died in labor, was the only matriarch buried elsewhere, in the site known today as Rachel’s Tomb. In the first century a magnificent structure was built atop the cave complex. Its architectural style resembles Herodian building projects, and especially the remaining parts of the Western Wall. Yet, no historical sources records Herod’s construction of this building, and so it may have been built by someone else. In the Byzantine period Christians turned the complex into a church, which was converted later by the Muslims into a mosque. The Crusaders reverted the building to a church, but after the Crusaders were expelled it became once again a mosque.

Jewish Return to the Cave of the Patriarchs 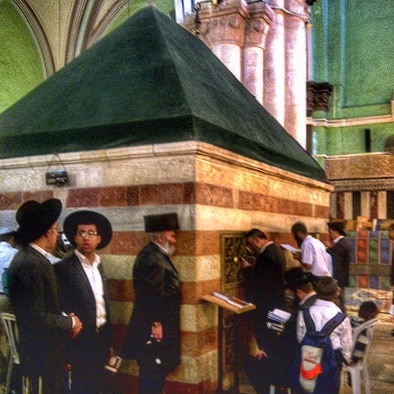 During the Mamluk and Ottoman periods Jews were allowed to approach the building only as far as the seventh step outside the eastern stairway. Nevertheless, some Jews settled in the city, and have lived in it till the Muslims massacred them in 1929. In 1967, on the fourth day of the Six-Day War, the chief Rabbi of Israel Defense Forces, Rabbi Shlomo Goren, drove into Hebron in his jeep. To his surprise, the Arabs surrendered without firing a single shot. Rabbi Goren reach the tomb of the Patriarchs, and blew the Shofar, which he used just a day earlier at the Western Wall to mark its liberation. The Cave of the Patriarchs was finally again under Jewish sovereignty. The eastern steps, including the infamous “seventh step” were removed, and the site became open with no limitations for people of all faiths.

Exploring Beneath the Cave of the Patriarchs

The cave of the patriarchs was partially surveyed in the 19th century, but being a holy Muslim site, no excavations were allowed in and around the complex. Nevertheless, in 1980 a 12-year-old Jewish girl was discreetly lowered into the narrow tunnel beneath the building, validating the vague knowledge cavities beneath the building. Later, in anoter discrete operation, these tunnels were excavated. Most fascinating was the documentation of a double cave, typical in shape to the Canaanite times, with Iron age cultic pottery in it. The double-spaced cave matches perfectly the site’s name in Hebrew – “Ma’arat Hamachpela” which means “The double [spaced] cave”. Furthermore, the Iron age chalices indicate that already int the 9th to 7th Centuries BCE Israelites and Judean were venerating this cave and presenting offerings in it.

In 1994 a radical right-wing Jew killed 29 Muslims during their prayers at the site. Following this event, the complex was split between Jews and Muslims, and heavy security measurements were added, to ensure the safety of all visitors to this special holy place.