Site of the Last Supper

One of the most formative events in Christianity documented by the New Testament is the ceremonial meal Jesus and his disciples conducted on the eve of Passover in Jerusalem. During that feast Jesus declared over the unleavened bread, “Take and eat; this is my body” (Matthew 26:26) and when drinking the wine, he said, “Drink from it, all of you. This is my blood of the covenant, which is poured out for many for the forgiveness of sins”. This text is the source for one of the main sacraments in Christian liturgy – the mass.

Today this building is outside city walls, but there is no doubt that in the first century CE Mount Zion was within city walls, thus matching the description given by Matthew that the place of the last supper was in the city. And by being on the second floor of the building, the Cenacle site fits the descriptions of Mark and Luke – that the feast was held upstairs.

But is the second floor of the building from the first century? Hardly. The interior design is clearly typical to the middle ages and is dated to the 12th -14th century. This style, known as ‘early Gothic’, is characterized by pointed or ogival arches. There is no doubt that this interior design was not in use in the first century. Aside that, in the 16th century the Ottoman confiscated the building and turned it into a mosque. To this day a Muslim prayer niche or michrab can be seen in the southern wall of the Cenacle, as well as Arabic inscriptions. Possible remains from the first century can only be seen outside the building. Some of the stones used in the foundation of the building are possibly from Roman times, but only an archaeological dig could provide better details on the date of the structure. The Syriac Orthodox church in Jerusalem claims that the last supper took place at Saint Mark’s Syriac Church, but in its current state it bears no remains from Roman times.

From an archaeological perspective, the location of the Last Supper remains unknown.

Where was the Last Supper?

The exact location of this event is not given. According to Matthew, the meal was conducted “in the city” (Matthew 26:18) meaning Jerusalem, but without any further information. Mark and Luke add that it was in a “large room, upstairs” (Mark 14:15; Luke 22:12).

Most Christians identify the place of the Last Supper on the second floor of a building on Mount Zion in the southern part of the old city of Jerusalem. The site is called ‘Cenacle’ or ‘Cenaculum’. The word is a derivative of the Latin word cena, which means ‘dinner’. 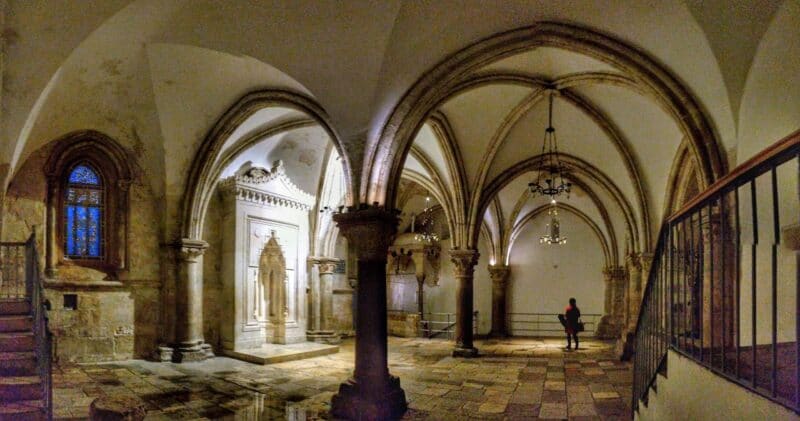 A tour of the site of the Last Supper can be combined with a guided day tour of Jerusalem.

Contact us to inquire more about a private tour to the site of the Last Supper: