Home  >  Christian Sites to Visit in Israel   >  Chapel of the Ascension

Chapel of the Ascension 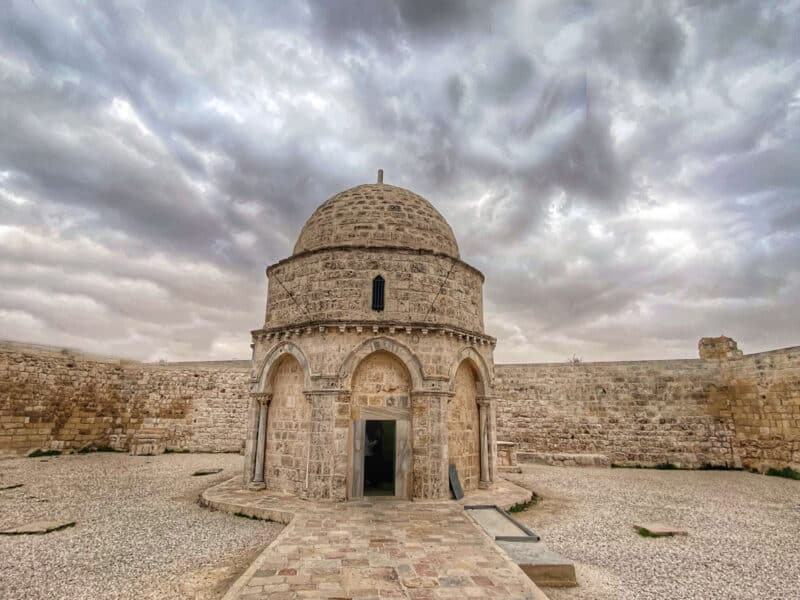 The book of Acts opens with a description of how Jesus appears to the disciples after his resurrection: “After his suffering, he presented himself to them and gave many convincing proofs that he was alive. He appeared to them over a period of forty days and spoke about the kingdom of God” (Acts 1:3). Upon completion “he was taken up before their very eyes..” (Acts 1:9). The exact location of this event is not given, but after his ascension “the apostles returned to Jerusalem from the hill called the Mount of Olives“ (Acts 1:12). Mount of Olives is a high hill east of the old city of Jerusalem. Today, most of Mount of Olives is a Muslim populated suburb of Jerusalem. But the southern end of the Mount holds several holy Christian sites, as well as a beautiful and popular viewpoint of the old City. The chapel of Ascension is located some 400 meters north of the viewpoint. It is venerated since the 5th century. A large round church was built around an indented rock believed to bear the footprint of Jesus. This church was destroyed by the Persians in 614 CE, but re-built by the Crusaders, in the 12th century. Following the Crusaders’ expulsion from Jerusalem, the Muslims destroyed most of the church, yet preserved its central chapel by turning it into a mosque. This mosque is standing to this day.

Did Jesus really ascend from the top of Mount of Olives?

While the book of Acts records the ascension of Jesus to take place on “Mount of Olives”, the Gospel of Luke documents a slightly different location for this event: “When he had led them out to the vicinity of Bethany, he lifted up his hands and blessed them. While he was blessing them, he left them and was taken up into heaven..” (Luke 24:50-51). Bethany is identified at “Al-Eizaryia”, a small Arab town on the eastern slopes of Mount of Olives. Its Arabic name derives from another substantial Christian event that happened in Bethany – the raising of Lazarus from the Dead (John 11). A central church in Al-Eizaryia commemorates the raising of Lazarus from the dead, yet despite the testimonial in Luke, no site in Al-Eizariya commemorates the Ascension of Jesus. On the other hand on Mount of Olives there are several places that relate to this event.

The “Chapel of the Ascension” is not the only place on Mount of Olives commemorating the ascension. A 100 meters south of the Chapel of the Ascension a large Basilica church called “Pater Noster” is also related to the ascension of Jesus to the heavens. Frankly, this church was the first site to commemorate the ascension of Jesus. It was constructed by Empress Helena in the 4th century, and was called Eleona (Greek for  “olives grove”).  For some reason, in the 5th century CE, the tradition moved to the nearby chapel of the ascension, and later the Crusaders attributed the Eleona church to a different event – Jesus’ teaching of “The Lord’s prayer”. Pater Noster is simply the first two words in this prayer  (Latin for “Our Father”).

The Russian Orthodox church of the Ascension

200 meters east of the “Chapel of the Ascension”,  at the hill top, a Russian orthodox church also commemorates the ascension  of Jesus. The property was purchased in the 1870’s, and it includes a 64 meters high bell tower which at the time operated the first Christian bell in Jerusalem since the time of the Crusades. According to local tradition, next to the entrance to the main church is a natural rock which marks the place where Mary Magdalene stood when Jesus ascended to the heavens, although this is not recorded in the New Testament.

Another site related to the ascension of Jesus is the Viri Galilaei Church, 300 meters north of the chapel of the ascension. The site commemorates the two men who approached the apostles while they were witnessing the ascension. Seeing them, the men declared: “Men of Galilee,” they said, “why do you stand here looking into the sky? This same Jesus, who has been taken from you into heaven, will come back in the same way you have seen him go into heaven.” (Acts 1:11). The site is property of the Greek-Orthodox church and is not open to the public.

Greek-Orthodox Monastery of the Ascension

In the 19th century the Greek-Orthodox church purchased a plot of land west of the Chapel of Ascension. Only in the 1990’s they finally decided to build a church at the site, but failing to obtain permits from the municipality it is still not complete.

Touring the Chapel of the Ascension

The Chapel of the Ascension is maintaned by a Muslim order (Waqf). It is open for visitors of all faiths, though the Muslims charge a small entry fee. Another mosque, near the entrance, commemorates a Muslim figure called Sit’ Raba’a al-Aduwiyyeh. By an earlier Christian tradition it is the tomb of Pelegia, a saint from the 5th Century. And by even en earlier Jewish tradition it is the tomb of the Biblical Prophetess Hulda.

A tour of the Chapel of the Ascension can be combined with a guided day tour of Jerusalem.

Contact us to inquire more about a private tour to the Chapel of the Ascension: