Home  >  Places to visit in Northern Israel   >  Tabgha, Church of the Primacy of Peter

Tabgha, Church of the Primacy of Peter 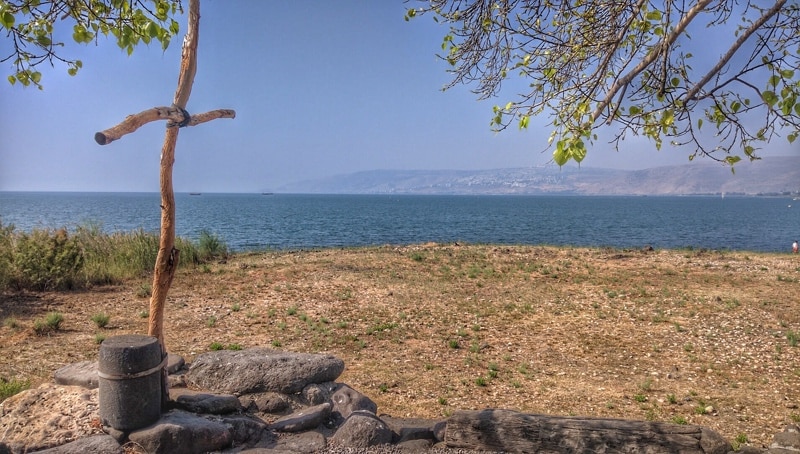 Set on a rocky promontory above the Sea of Galilee, the humble sized chapel of the Primacy of Peter is one of the most significant sites in Christian history. By a centuries’ old tradition here, after his resurrection, Jesus appointed Peter to lead the early Christians. Located in a lush green garden, the site provides an quaint and spiritual abode to visit, appreciate and contemplate on Christian faith.

History of the Church of Peter’s Primacy

After his resurrection, the Gospels provide various accounts on where and when Jesus appeared, before his final ascension to the heavens. According to Gospel of Luke (24:13-35), Jesus appeared at Emmaus, yet once he was recognized, he disappeared. The Gospel of John records Jesus appearing to Mary Magdalene (20:11-18), to his followers in Jerusalem (20:19-23), to Thomas (20:24-31), and lastly, to the disciples, by the Sea of Galilee, while they were fishing –

“Afterward Jesus appeared again to his disciples, by the Sea of Galilee.It happened this way: 2 Simon Peter, Thomas (also known as Didymus), Nathanael from Cana in Galilee, the sons of Zebedee, and two other disciples were together. 3 “I’m going out to fish,” Simon Peter told them, and they said, “We’ll go with you.” So they went out and got into the boat, but that night they caught nothing. 4 Early in the morning, Jesus stood on the shore, but the disciples did not realize that it was Jesus.5 He called out to them, “Friends, haven’t you any fish?”, “No,” they answered. 6 He said, “Throw your net on the right side of the boat and you will find some.” When they did, they were unable to haul the net in because of the large number of fish.” (John 21:1-6) 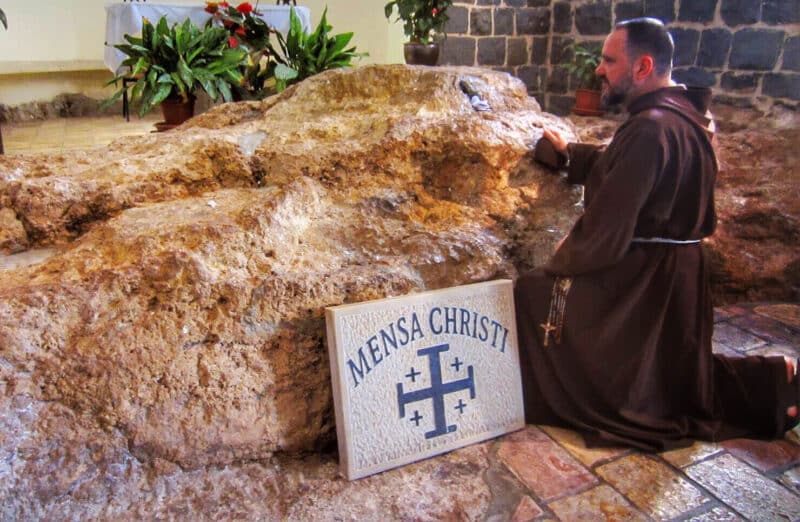 The disciples then returned to shore and joined Jesus for a meal of grilled fish and bread. Later, Jesus stated to Peter, repeatedly – “feed my lambs”, “Take care of my sheep”, and “feed my sheep”. By Catholic faith, this reinstatement of the primacy of Peter established his papacy. In the 4th century CE this event was identified and sanctified at the northwestern shore of the Sea of Galilee. The site, called today in Arabic Tabgha, is known for its local warm spring water, which attract the fish, and the fishermen. Tabgha is also associated with Jesus’ miracle of the multiplication of loaves and fish (Church of the Multiplication). The 4th century chapel that marked the event was destroyed in 1263 yet was rebuilt in 1933. By local tradition, the rock in its center is The Table of Christ (Mensa Christi), where Jesus and the disciples dined.

Touring the Church of the Primacy of Peter

The site is open every day of the week, free of charge. However, parking is limited to buses only. The chapel is a short walk from the main road and is next to the shore of the Sea of Galilee. Often fish can be spotted in the water, the same type of fish Jesus and Disciples fished and ate. This scenic and quiet spot is perfect to contemplate on the glory of the Lord.

A tour of Church of the Primacy of Peter can be combined with a guided day tour of the Galilee.