The Dome of the Rock

The Dome of the Rock is an architectural landmark in the history of Jerusalem. By Muslim tradition it marks and sanctifies the place where Muhammad ascended to heaven to receive the prayers of Islam. Being so, Muslim view it as the third holiest site in Islam, after Mecca and Medina. However, it is built over the spot of a Jewish Temple, and so is a source for an unsettled dispute between Islam and Judaism.

History of the Dome of the Rock

The Temple Mount has been a place of human worship from the dawn of history. The Jews erected two consecutive temples at the site. The first, built by King Solomon, is almost 3,000 years old. However, in year 70 CE the Romans destroyed the Jewish Temple and confiscated its treasures. Jews were forbidden to have a temple, nor live in Jerusalem, from now on. Being so, centuries later, when the Muslims conquered Jerusalem, they found the Temple and the Temple Mount in ruins. Eager to Muslimize the site, they developed a claim that a big part of bed rock at the center of the Temple Mount bears the footprint of Muhammad. Being so, this is the site where Muhammad ascended to heaven to receive the prayers of Islam. This important event in Islam is documented in the Quran, but it never relates to Jerusalem. In fact, the Quran never mentions Jerusalem.

The Construction of the Dome of the Rock

An inscription inside the monument indicates it was completed in the 54th year to Muhamad’s hijra, which correlates with year 691 CE. It is therefore assumed that the Dome of the Rock was constructed by the Muslim Umayyad leader of Jerusalem Abd-el Malek. The structure really imitates octagonal and concentric Byzantine churches (i.e. Capernaum’s octagonal church), but it supersedes them by size. The Dome itself is the same size as the dome of the holiest Christian monument in Jerusalem – the Church of the Holy Sepulchre. The Dome of the Muslim shrine was originally covered by sheets of lead. In the 1960’s it was replaced with Aluminum-Bronze plates covered with gold leaf. In 1998 it was refurbished again with Gold plated Aluminum.

The structure itself was decorated with a mosaic wall using glass stones. In the 16th Century the Ottomans replaced it with blue colored tiles and marble slabs.

Touring the Dome of the Rock 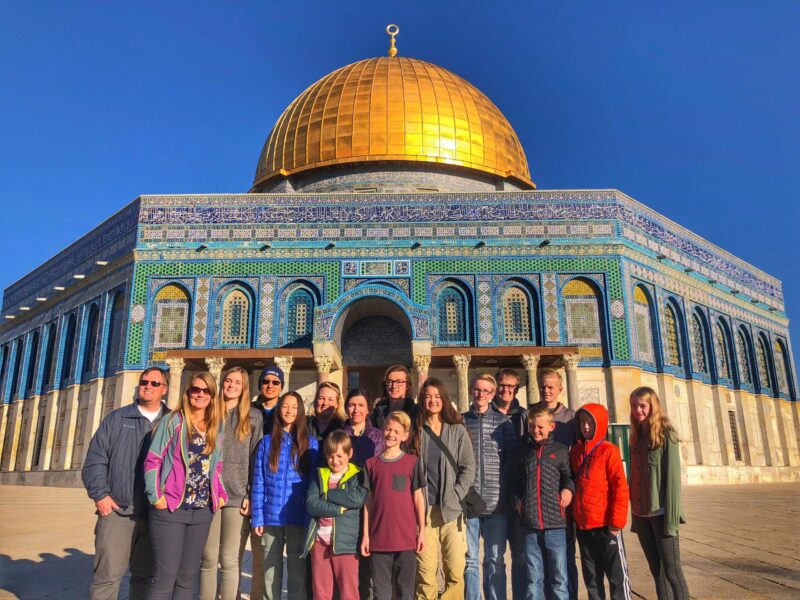 Due to the ongoing tension between the Palestinian Muslims and the State of Israel the entry to the Temple Mount is quite restricted. Moreover, since 2000 entry to the Dome of the Rock is forbidden for non-Muslims. Nevertheless, it is still possible to appreciate its size and grandeur of this building by from the outside.

A tour of the Temple Mount can be combined with a guided day tour of Jerusalem.

Contact us to inquire more about a private tour of the Temple Mount: