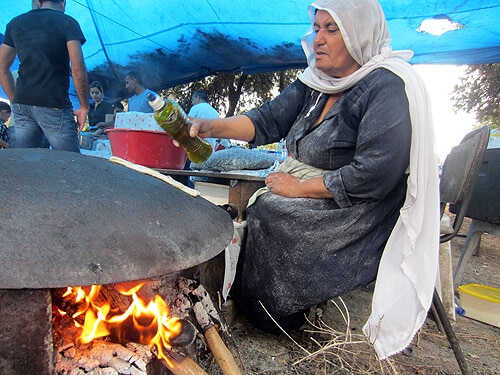 The Druze are an Arabic-speaking ethnoreligious group established in the 11th century CE in Egypt. Numbering more then a million, the Druze biggest communities are in Syria, Lebanon and Israel.

The Druze living in Israel are unique among the local Arab communities for been loyal to the state. They serve in the Israeli Defence Froces, and are have a special standing in Israel’s political and military spheres.

The History of the Druze

A Monument in memory of Al-Atrash and the Druze revolt in 1925, in Majdal Shamsh, the Golan Heights. The Druze faith stemmed from Shiite-Isma’ili Islam in Egypt during the 11th century. Its key figure was the Fatimid Caliph of Egypt, Al-Hakim bi-Amr Allah, who declared himself an earthly incarnation of God. His mysterious disappearance in 1020 CE was perceived as proof of his divine nature by his early followers, the first Druze. Yet, the Muslims authorities considered them as Heretics, and so the Druze fled from Egypt and settled in mountainous areas in the Levant. Their religion was proselytized for only a short period, and since the 1050s it is closed to outsiders. In 1925 the Druze Leader Sultan al-Atrash led a revolt against the French rule in Syria. This first Druze national movement was also their last. Failing to form a homeland of their own, the Druze adopted a policy of being dedicated to the country where they live in. They serve in each country’s army and are involved in its politics and economy.

The Druze and Israel

A Monument in memory of Al-Atrash and the Druze revolt in 1925, in Majdal Shamsh, the Golan Heights.

In the 12th century CE the Jewish traveler Benjamin of Tudela was the first to record the Druze living in the Galilee. He described them as mountain-dwelling warriors who favored Jews, as both groups were persecuted. During the British Mandate the Druze in most cases refrained from taking part in the Israeli-Arab conflict. In the 1948 most of the Druze supported the Israelis, although there were some Syrian Druze among the Arab forces attacking Israel.  Today, the Druze are unique among the Arab communities in Israel for been unequivocally loyal to the state. Since 1956 the Druze are the only minority conscripted to serve in the Israeli Defense Forces and the border police. Over the years they developed a special standing among the country’s minorities, and some of its members reached high-level positions in the Israeli political, public, and military spheres. New genetic research even suggests a DNA link between the Druze and Ashkenazi Jews, whose shared roots were traced northeastern Turkey. As of 2020 there are about 120,000 Druze living in the Galilee, 20,000 in the Carmel, and another 20,000 in the Golan Heights. For years the Druze in the Golan Heights were solicitated by Syria to preserve their loyalty. However, in recent years they are gradually acknowledging the Israeli sovereignty of the Golan Heights and its benefits.

The Druze villages of Isfyia and Daliyat el-Carmel, in the Carmel, are known for their local markets and restaurants. Especially on the weekends they get crowded with Israeli shoppers and diners. Kfar Yasif in the Galilee, which is mostly Druze, is also known for its shopping centers. Several Druze families offer home cooked meals for groups, as well bed and breakfast rentals in their villages. They are very welcoming and happy to explain threir unique history and religion. The holiest Druze site in Israel is Nebi Shu’ayb, in the lower Galilee. The site is a major Druze gathering site, and especially during their annual festivals, in late April.  Other significant Druze sacred sites are the tomb of prophet Sabalan in the Galilee, the tomb of Nabi al-Khadr near Caesarea-Philippi, and the tomb of Al-Ya’afuri in the Golan Heights.

A visit a Druze Village can be combined with a day tour in the north.