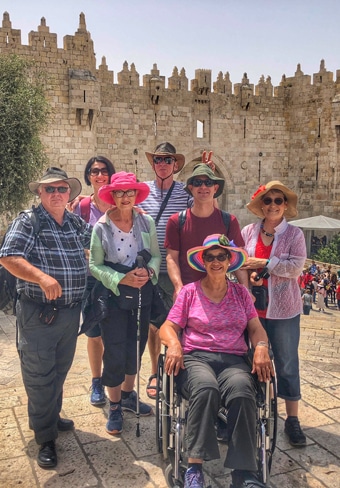 Touring in a new place is an exciting adventure. This entails memorable experiences, trying new foods, and immersing yourself into a foreign culture and language. However, it can also be quite exhausting, and especially for seniors or people with certain physical disabilities. And Israel is no exception.

The Old City of Jerusalem, for instance, cannot be toured by car. Even presidents and popes must walk there. This is also true for several holy destinations, national parks, nature reserves, etc.

Traveling in a wheelchair can be challenging. Not all sites are wheelchair friendly, and some do not have any alternatives to walking. In recent years, there has been noticeable effort put into making national parks more accessible. Many parts of Masada, for example, can now be reached in a wheelchair. However, for many other sites, experience is the key to overcome various obstacles if you need certain accommodations.

Over the years we have gained an abundance of experience and have managed to modify all tours while keeping the integrity of the trip. We have a solution for any mobility accommodations needed. Or if you simply need to slow down the pace, we’ve got you covered.

Below are several examples of how we modify a day-tour to ensure a successful experience.

Finally, if you have a handicap parking permit, please bring it with you! Or send us a photo of it before the tour. This will allow us to park at the most convenient location at most sites.

The old city of Jerusalem is set on hilly terrain and its layout hasn’t changed much since the Middle Ages. Its streets are mostly cobblestone, narrow and stepped alleyways. Only one-way car lanes pass through parts of the Armenian and Jewish Quarters. Being so, touring the old city in a wheelchair can be a challenge, but possible. We have detailed knowledge of the specific alleys where you avoid steps. Although this is a great alternative, it may be a slightly bumpy ride.

However, a few years ago a golf cart service was established and since then has greatly improved the experience of the tour. At $30 per hour, the cart can take up to 5 passengers through most of the Old City attractions. This service is not limited only to disabled people. It is also very appreciated by our senior tourists..

Touring the main attractions of the Dead Sea requires coping with challenging heat for most of the year. At Masada, for instance, a cable car will comfortably get you to the site, but there is not much shade. Although, for people in wheelchairs, the site is far more accessible now. In recent years, ramps have been installed throughout most of the site.

A swim at the Dead Sea is NOT recommended at any of the public beaches, north of Masada. The reason is simple – the drop of the shoreline of the Dead Sea makes the walk to the water level a steep and long walk, on rough terrain, in extreme heat. On the other hand, all the hotels at the Dead Sea have the option of bathing in an indoor pool, filled with Dead Sea water. All of them also offer a nice, fulfilling buffet for lunch.

The tour will also include a drive through Ein-Gedi Nature Reserve. This oasis is known for its waterfall, but reaching it requires a long hike. Alternatively, it is a very short walk to visit the ancient synagogue of Ein-Gedi. It is also possible to drive through the beautiful botanical gardens in Kibbutz Ein-Gedi.

Finally, on the way back, we won’t miss the viewpoint of the caves where the famous Dead Sea Scrolls were found. Here, about 2,000 years ago, members of a mysterious Jewish sect hid their precious library in fear of the Romans. To think that these caves yielded a codex of approximately 900 manuscripts is mind boggling. We could also visit Qumran, believed to be the headquarters of this enigmatic sect. Like Masada, ramps have also been installed throughout this site.

Tour of Jaffa and Tel-Aviv for Seniors

Reputed as “the city that never sleeps,” Tel-Aviv is a vibrant metropolis that is constantly in motion. It is the cultural and financial center of Israel, attracting locals and tourists alike. Its main touristic destinations are along Rothschild Boulevard and Jaffa.

We start with a drive through Jaffa. Passing by some of its historical landmarks, we review its long and rich history, from Solomon’s times to current days. We could also go for a short stroll in its archaeological garden and main alley.

Next, we drive through the busy and colorful flea market where vintage furniture is offered next to used jeans and vinyl records. At Neve Tsedek’s main street we will take a moment to appreciate the 19th century architecture wonderfully integrated with art galleries and cafes.

Finally, we get to Rothschild Boulevard. About 120 years ago, 60 Jewish families established here a humble size town named – Tel-Aviv. Nowadays, the boulevard includes restored historical buildings, restaurants and boutique hotels. We could stop here for a lunch break, and also join a tour at the “Independence Hall.” On May 14,1948 the state of Israel was declared in this very building, fulfilling the long-sought Jewish dream of forming a Jewish state in their ancestral land.

At the end of Rothschild Boulevard, we make our last stop at the Rabin Assassination site, paying a tribute to the Israeli prime minister who was assassinated at this spot. We review the events that led to this political assassination, and its aftermath.

Depending on time and desire, it is also possible to join a tour of the Palmach Museum. This exhibit presents the story of the special Jewish fighting forces and the pivotal role they had in the struggle of forming the State of Israel.

Tour of Caesarea and Haifa for Seniors

Take a tour along the northern coast of Israel where you will discover two very different sites. Caesarea was founded in the 1st century BCE by Herod the Great and became a major city for over 1,000 years. Its rich remains are spread over a big national park, halfway between Tel-Aviv and Haifa.

With our specially licensed tour car, we are among the few permitted into the port area. This privilege is much appreciated by seniors and/or people with disabilities. Within a short walk, you get to appreciate the new visitor center and the visible parts of the sunken harbor. Another short car ride will get us right behind the Roman era theatre, as well as the beautiful remains of the ancient aqueduct by the beach.

Next, a ride up the Carmel Mountain will bring us to some stunning viewpoints of the coast and the Galilee. We could also stop for a special lunch experience in a Druze village.

Finally, we descend into Haifa to admire the iconic Bahai Gardens from the upper balcony viewpoint. Composed of 19 terraces around the tomb of the Bab, this landmark is one of the most sacred places in the world for the Bahai believers. We end the day with a drive through downtown Haifa, possibly stopping for a coffee at the German Colony, marking a great end to a great day.

Tour of Nazareth and Capernaum for Seniors

The Galilee is a mountainous ridge in northern Israel, associated strongly with the Christian faith. The Galilee is where Jesus grew up, performed miracles, and shaped and spread his faith. Today, sites relating to Jesus and his ministry are holy pilgrimage destinations, visited and worshipped by many.

Reaching and touring these sites can be a challenge for people with disabilities. Nazareth, for example, is a city of about 80,000 residents. With its main attractions in the heart of the city, parking is virtually impossible. But we will take care of that! We know how to get to the closest point possible near the Church of Annunciation, as well as Marys’ well.

Cana is 6 miles north of Nazareth. The Gospel of John records Jesus turning water into wine during a wedding here. The Roman-Catholic church in Cana has possible remains of the wedding venue, but its access is limited. However, we can get to the closest point possible and minimize the walking.

Finally, on the shores of the Sea of Galilee the tour will get you to Capernaum. All gospels record, in detail, Jesus’ acts in and around this small fishing village. Unlike tour groups using buses, we will park right by the main entrance, and reduce the walking substantially.

Tour of the Judean Foothills (the Shephelah) for Seniors

Also known as the “Biblical Tuscany,” the Shephelah is a beautiful and lush area between Tel-Aviv and Jerusalem. Its low hills countryside is clustered with Biblical sites and stories, set amidst pine tree forests and cultivated fields. Both Samson and David interacted with the Philistines in the Shephelah; the ark of the covenant changed hands in the Shephelah; and in 1948 a significant road carved in the Shephelah saved the Jews in Jerusalem from hunger.

Not all of its historical sites are fully developed, but with our 4×4 SUV we can reach many of the sites. This can make a big difference for senior travelers and/or people with disabilities.

Take Biblical Beth-Shemesh for example. The city that worshipped the sun in Canaanite times, was later an Israelite town. About 3,000 years ago the Ark was kept briefly in Beth-Shemesh, after its return from Philistine captivity.  Recent discoveries made at the site relate to this fantastic story, but are hard to reach. Luckily, we can bring you right to the spot.

Same for Ziklag. This is the site where David lamented after hearing of Saul’s death.  It is hard to reach by car, but possible.

The local roads will also get you to discuss and pass by Biblical Lachish, Maresha, and the site of the battle between David and Goliath.

Make sure to take the opportunity to taste some of the local wine varieties of the Shephelah. Even 3,200 years ago Samson was enticed by this wine (and Delilah). Will you fall for it as well? 🙂

Finally, after a lunch break, explore the 1948 “Burma Road.” Here, during the War of Independence the hidden axis enabled dispatching critical supplies to the Jews of Jerusalem. The 10 km long “Burma Road“ best captures the beauties of the land, and the role of the Shephelah in history.

If you are an art lover, end the day with a visit to the art studio of David Gerstein. A colorful and great way to end a great day.

Alternatively, email, whatsapp or call us!

The early spring is the BEST time to explore the J

Nothing like exploring the Judean Desert in the wi

Off to the desert!.. can you tell what is the poin

Just a few more photos of the filming in Akko last

The city of Akko is inhabited at least for 4,000 y

It is continuously inhabited for at least 4,000 ye

Unfortunately, I am bound to a contract that does

Trying to find the perfect location to start film

Good morning Jerusalem! 😇 Where am I? And more

Set on a hilltop high above the Jordan valley, Ale

The winding roads of the Judean Desert led us to t

The Judean Desert is full of treasures - The Dead

Reporting in new Discoveries at Gethsemane on “t

Presenting Mount Nebo to “The Watchman”. A fil

An Interview About the Church Discovered at Caesar