Lithostrotos and the Trial of Jesus 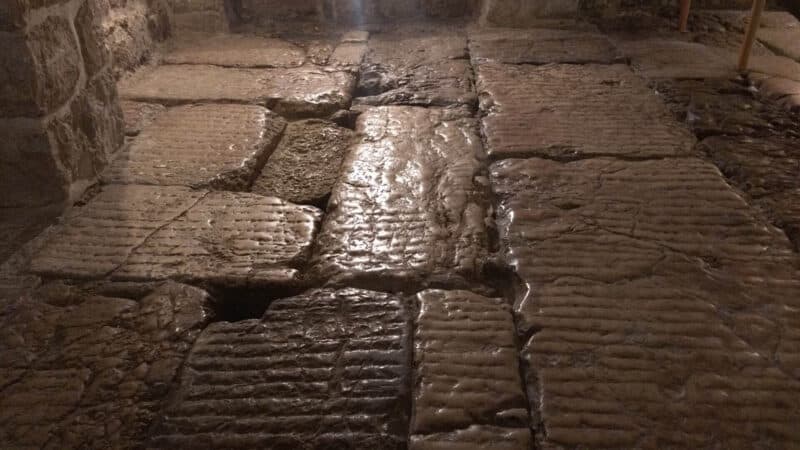 Lithostrotos is a term mentioned in John 19:13 to describe where the last part of Jesus’ trial took place. It is a term in Greek (λιθόστρωτος) which means “stone pavement”.

All the Gospels record the trial of Jesus to take place in the Praetorium. Most Christians believe the Praetorium of Jerusalem was in the Antonia, a mighty fortress built by King Herod next to the Temple Mount. Towards the end of the trial, the judge, Pontius Pilate, introduced Jesus to the public, and discussed his guilt. The Gospel of John records adds where this took place –

When Pilate heard this, he brought Jesus out and sat down on the judge’s seat at a place known as the Stone Pavement (which in Aramaic is Gabbatha). (John 19:13).

In 1857 during construction work north of the Temple Mount for a new convent an ancient paved area was exposed. The large flagstones, some with Roman gameboards chiseled on them, left no doubt that the pavement dates to Roman times. Being so, it was identified as the “stone pavement” mentioned in John 19:13. Furthermore, exposing the foundations of an ancient arch next to pavement indicated it is really a Roman triumphal arch. The arch was also related to Jesus’ trial and is called Ecce Homo arch. However, modern archaeological research assets that both the pavement and the arch were constructed a century later to Jesus, when Jerusalem was re-founded as a Roman pagan city by emperor Hadrian.

The ancient stone pavement identified with the lithostrotos is displayed under the convent of the Sister of Zion, in the Muslim quarter. It is also possible to access a large water reservoir beneath the stone pavement that still holds guttered rainfall. It is identified as the strution pool mentioned by Josephus.

A tour of the Lithostrotos site can be combined with a guided day tour of Jerusalem.