History of Jerusalem Walls and the Ramparts

The Current walls of Jerusalem’s old city were formed by the command of Suleiman “The Magnificent” in the early 16th century. Engulfing the old city, the walls are about 3 miles long. Six gates were installed in them, and a 7th one was added in the 19th Century. After the British conquest of the Holy Land a restoration project of the walls cleaned and restored parts of the walls and formed a “green belt” in front of them. This municipal policy is followed to this day. In 1948 parts of the city’s walls were used as Jordanian posts. After the Six-Day War in 1967, the posts were cleared, the walls were cleaned, and the ramparts were opened to the public.

Hiking Along the Ramparts 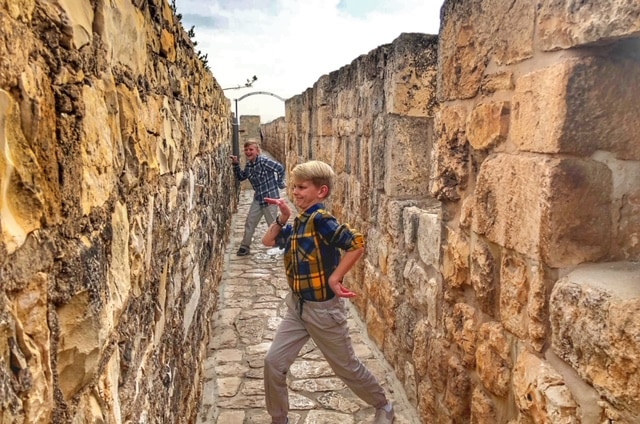 The starting point for the ramparts is a bit hidden, right behind Jaffa Gate. Yet, ascending the steep medieval stairway, the views in all direction are overwhelming!

Two separate hikes are available along the Ramparts. One route heads south, towards the Armenian Quarter and the Jewish Quarter. At first you pass by the Tower of David Museum and above the Kishle Excavations. The ramparts provide a rare upper view of the citadel and its moat, as well as the Local police station, established already in Ottoman times. Next, the courtyard of an Armenian theological seminary appears. Behind it is the massive dome of Saint James Cathedral, and the Church of the Archangels. The views to the west are also quite rewarding. Through the stone crenellation western Jerusalem is unfolded. Luxury hotels are spread between 19th century neighborhoods. The iconic windmill of Mishkenot Shananim in the distance marks the first Jewish settlement outside city walls. Beneath it is the “Sultan’s pool”, more known today for its summer concerts. As the city walls curves to the east, the path takes you right above Zion Gate. Beneath this gate fierce battles took place between the Jordanians and the Israelis in 1948. Bullet holes can still be traced in the wall in this area. Outside the gate several landmarks demonstrate the sanctity of Mount Zion. Most dominant is the unfinished Armenian Church and Dormition Abbey. By local Christian tradition this is where Mary fell asleep and the event of the Pentacost took place. The ramparts walk continues next towards the Jewish quarter, ending at the Dung gate. From here you can continue to the Western Wall, or to the City of David. 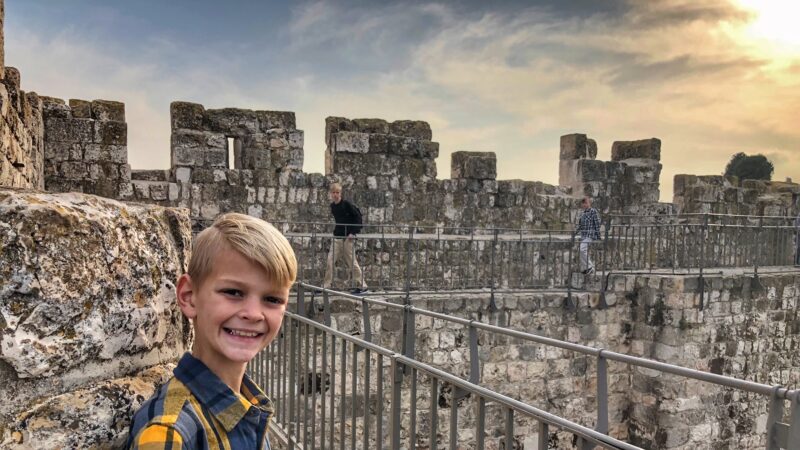 The other route also starts at Jaffa gate, and head north. It provides great views of the residential part of the Christian Quarter and later of the Muslim Quarter. Especially impressive are the panoramas from on top of Damascus Gate , where there is also an exit. If you continue the hike, the wall circles around the old city, passes above Zedekiah’s cave, Herod’s gate, opposite Rockefeller Museum, and ends at the Lions Gate. From here you can continue to Garden of Gethsemane, or enter the old city and join the Via Dolorosa.

The total length of both walks are about 2 miles. Comfortable shoes are recommended as the stone pavement is not always even. A few plaques provide minimal explanations along the way. A tour guide is recommended to fully appreciate all the landmarks and historical buildings along the hike.

The hike along the ramparts can be combined in a day tour of Jerusalem.

Contact us to inquire more about a private tour of Jerusalem, including the Jerusalem’s ramparts: