Machon Ayalon (in Hebrew: Ayalon Institute) was the code name for a secret bullet factory in the 1940s. It provided vital ammunition for the Jewish fighting forces in the 1948 Israeli-Arab War. Today, as a museum, the site offers guided tours, presenting the site’s special legacy.

Despite their Balfour Declaration, in 1917, the British led a clear anti-Jewish-Zionist policy during their mandate over Palestine. They limited Jewish immigration, the right to purchase land, and the worse – the possibility to arm themselves against Arab attacks and riots. Determined to protect themselves, the Jews plotted a plan. In 1938 12 bullet production machines were purchased in Poland. They were shipped to the port of Beirut, and four years later were discretely transported, by train, to “Kibbutzim Hill”. “Kibbutzim Hill” was founded in 1932 to prepare Jewish pioneer groups for Kibbutz life. This site had several advantages for the operating also the secret factory: (1) it was already a known operating institution, and for a different purpose; (2) It was on a hill, which was difficult to monitor externally; (3) The farm’s laundry machine, and the train station nearby, generated much noise that would disguise the noise of the production machines; (4) The Jewish-Zionist pioneer groups could provide the labor. 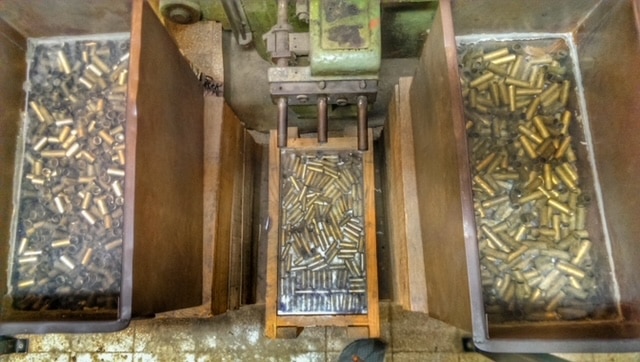 Being so, in 145, the Haganah recruited a group of 45 of young women and men (“Tsofim Aleph”) who unanimously agreed to top secret task.  In a period of only three weeks, an underground hall, in the size of a tennis court was dug, with nearly 2-foot-thick concrete walls. Once the heavy machines were lowered in, a laundry and bakery were constructed over it, on the surface. Their noise camouflaged the factory’s operation, and their chimneys disguised its smells. The production was done 16 hours every day, in two shifts. To justify the long hours of operating the laundry machine on the surface, the group offered laundry services to other kibbutzim and the people of Rechovoth, at attractive costs. Eventually, even the British sent their uniform for laundry at Kibbutzim Hill. Between 1945 and 1948, this group manufactured in the clandestine factory over two million bullets – an average of 40,000 per day. The bullets were smuggled out in false bottoms of milk cans, and distributed by the Haganah, mostly among Palmach fighting units. In 1949, after the War of Independence, the manufacturing of ammunition was centralized by the Israeli army (the IDF). The underground facility went out of use, yet its existence was kept as a secret until 1973. Only in 1975 it was re-opened, and in the 1987, after a restoration project, it was opened for visits.

Today, the Ayalon Institute operates as a museum, and it is quite a popular tourist attraction. A devoted staff leads guided group tours through the facility, thrilling the kids when the laundry machine moves, revealing the secret entrance to the underground factory. The tour, which takes about an hour is both fun and exciting, introducing another dramatic chapter in the Jewish struggle to establish the state of Israel.

Joining a group tour of Machon Ayalon must be pre arranges, and can be combined in a guided day tour of Jaffa and Tel-Aviv and/or the Shepehela.

Contact us to inquire more about a private tour to Ayalon Institute: