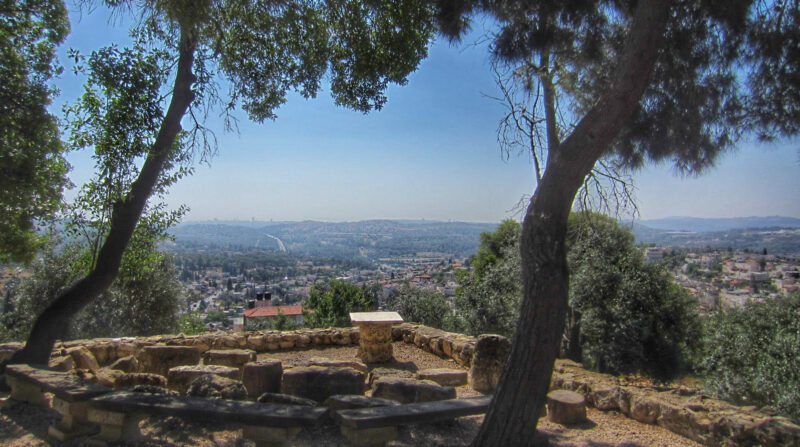 Kiryat Ye’arim and the Ark

Kiryat Ye’arim is mentioned in the Bible as a Judahite town near Jerusalem from the period of the judges and King David (11th and 10th centuries BCE). According to the first Book of Samuel (ch. 7), the Ark of the Covenant was stored at Kiryat Ye’arim for 20 years after it was returned from Philistine captivity.The text says the ark was kept “in the house of Avinadab in the hill” before King David conveyed it to his new capital of Jerusalem.

Kiryat Yaarim is identified at the hill of “Deir El-Azar” above the Arab village of Abu Ghosh, some 12 kilometers (7 miles) west of Jerusalem. Most of the hill is occupied by the French “Church of Our Lady of the ark of the Covenant”. Yet, its perimeter is accessible for archaeological excavations. Excavations at the site began in 2017, by a joint team join team of College de France and Tel-Aviv University. Recently, Prof. Israel Finkelstein, co-director of the expedition, presented the finds made at the site so far, and his preliminary conclusions.

Evidence relating to the Ark?

The most remarkable find made by the Israeli-Frecnh Archaeological expedition is a massive wall built with great precision around the hilltop. It forms a big platform of about 110 x 150 meters. This giant platform, according to prof. Finkelstein, hints to the existence of a large and important cultic center in the area. However, the dating material lacks typical Judean pottery from the time of King David. Instead, states Finkelstein, most of the pottery is Israelite in style, and dates to the first half of the 8th century BCE. Finklestein’s conclusions are that the site was a religious and possibly also an administrative center in the days, but of the kingdom of Israel, and not before the days of Jeroboam II, king of Israel.
In general Prof. Finkelstein is known to lead a scholarly line that refutes much of the bible as a reliable historical source. The Old Testament, according to Finkelstein, was compiled in Jerusalem in the 7th Century BCE. It glorifies the kings of Judah and belittles the kingdom of Israel. Judah, according to Finkelstein, was a small vassal entity compared to the Israelite kingdom, and the results of the excavations at Kiryat Yaarim are further evidence for this understanding. If any item was ever worshipped at the site, in Finkelstein’s view it was not related to the Kingdom of Judah, and not in the time of King David.
In my humble opinion it is way to speculative to reach any conclusions from digging a 10 feet section of any retaining wall. Unlike a building, retaining walls and terraces will always be poor in finds. Furthermore, you could argue for a counter speculation – the 8th century BCE retaining wall indicates an expansion of a site, IN MEMORY of the placing the ark at the hilltop of the site. Indeed, the bible says the ark was placed “on the hill” of Kiryat Ye’arim (1 Samuel 7). Perhaps later it was decided to form a monumental plaza in memory of where the ark was kept?