Set at the lowest place on the planet, the still blue water of the Dead Sea reflecting the Judean desert cliffs forms one of the most captivating landscapes in Israel. The Dead Sea is really a lake, fed mostly by the Jordan River. It earned its name for being so salty, making a habitat where no fish can survive. Nearly a third of its body is salt, dissolving from seabed deposits. The shoreline of the Dead Sea also holds the Guinness record of being the lowest point on the planet. It is about 1400 feet (430 meters) beneath sea level. Besides salt, the Dead Sea is also rich in minerals, and their therapeutic benefits have been noticed since ancient times. King Herod, for instance, went for treatment at the Dead Sea at Ma’in hot springs. Furthermore, the Romans recorded that Jewish slaves with tied hands still float on the surface of the lake. Today, tourists go the Dead Sea hotels and public beaches for similar experiences. The lake’s water, mud, and suntan treatments have been proven to have a therapeutic effect. It also rejuvenates and invigorates the skin. But you don’t need a medical excuse to go to the Dead Sea. Soaking in the Dead Sea’s water does not resemble anything you’ve ever experienced before. To fully optimize the experience, here are some of the biggest do’s and don’ts, special places you must stop by, and general information worth noting about this bucket-list destination.

Today, along the Dead Sea’s western shores, there are only two areas where you can go for a swim. The beaches in the northern part, near Qumran are popular. However, they tend to be crowded and poorly maintained. Your best option would be to swim at one of the hotels, in the lake’s southern part. The hotels offer a lunch and swim package deal. Our top recommendations are Herod’s Hotel, a 5-star option; Crown Plaza, 4-star hotel; and Hod Hotel, another 4-star hotel. All of these options offer a variation of the swimming, spa and lunch packages.

2. Cover Yourself With Mud

The best benefit of the northern beaches is the free natural mud deposits by the beach. At the hotel zone, there are no natural mud deposits, but you can purchase a bucket of it. Either way, you want to make sure you have this experience to see what all the rave is about! 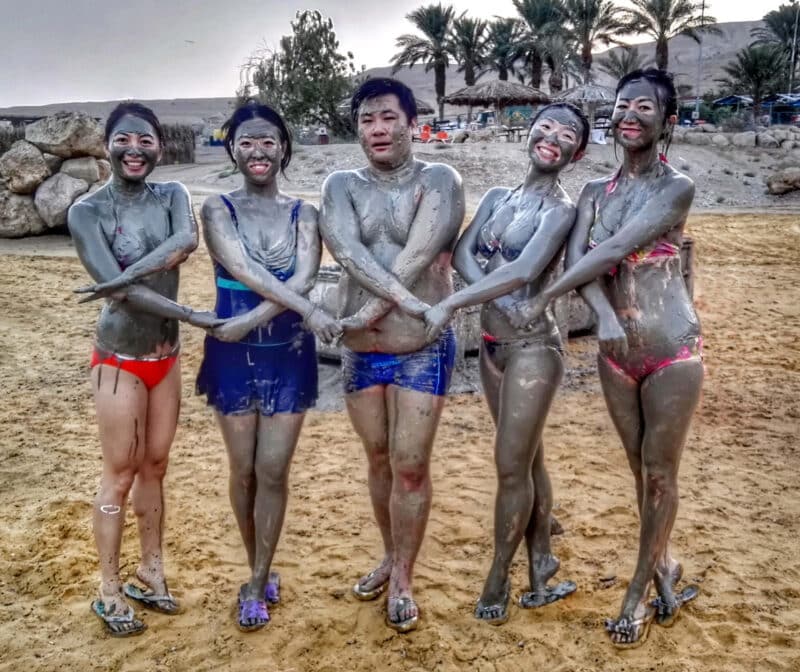 Hopefully someone in your group has talent in taking great pictures, because the Dead Sea makes for some of the most unique shots. Floating effortlessly on water? The possibilities are endless. In addition to the wonderful aesthetic, you want to make sure this moment is captured for you to look back on and reminisce. Just make sure you’re extra careful with your cameras and devices, salty water is not too friendly!

1. Don’t Shave the Day Before the Swim

We can’t stress this enough. The salt level in the Dead Sea is so high, most life doesn’t survive in it (hence the name). With that level of salt, you can imagine what that would do to even the smallest cuts. Our best tip: save all shaving for a few days prior or wait until after your Dead Sea experience.

2. Don’t Dip Your Head in the Water

This one may not be as obvious as it sounds. You’d be surprised how many people do this intentionally, or accidentally. We said it before, and we’ll say it again: The Dead Sea is one of the saltiest bodies of water on the planet. It’s not like swimming in a pool or even the ocean. Although you would have to make an effort to physically dive in, you want to avoid burning your eyes. While we’re at it, we should mention that splashing goes under this list too. In the event you get water in your eyes, you can rush to the nearest outdoor shower (with a friend guiding you) and rinse your eyes with fresh water.

This is a good rule of thumb when visiting Israel, but especially for the Dead Sea. Just like you would protect your body with sunscreen and a hat, you want to protect the bottom of your feet from the very rocky bottom of the water. Depending on the area that you’re in will determine how rocky walking in and out of the water will be. If you go to the northern beaches, you’ll notice how sharp and rocky the ground is. You want to avoid cutting your feet- remember what the salt can do to the slightest cuts.

Where can I swim? The Dead Sea region is divided into public beaches and private hotels. You let us know what sounds most appealing to you, and we’ll make sure to arrange all the details. We’ve created brief descriptions about our favorite spots to visit depending on your vision for the trip.

It’s probably best to mention beforehand, that even though some beaches are labeled “public,” they still charge a small fee to enter. However, some of the beaches are free of charge. Public beaches offer public restrooms, showers and changing rooms. Depending on the time of year, these areas may get particularly crowded. So, if you come during peak season, know that there will be heavier crowds using these amenities at the same time. If you don’t intend to stay at the Dead Sea very long, and you only want to quickly check it out, we can definitely arrange a trip to one of the public beaches to accommodate your schedule.

If you are able, and block out enough time, we highly recommend experiencing what the Dead Sea hotels have to offer. We hear time and time again from various clients about their satisfaction with the hotel experiences. Although there are many options to choose from, our personal favorites are: Herod’s Hotel (5-star), Crown Plaza (4-star), Hod Hotel (4-star). These 3 options, although they provide different experiences, they all offer lunch, private swimming, and exclusive spa treatments. Since they are package deals, they tend to run between 70-100USD. You do not want to miss out on this one of a kind experience. It really makes visiting the Dead Sea all the more special.