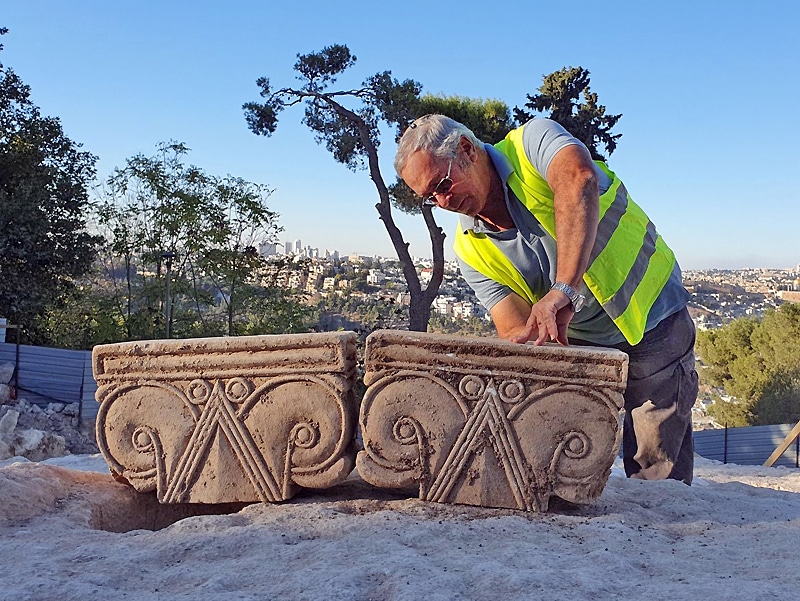 A few weeks ago, the Israel Antiquities Authority announced on a rare and very special discovery made during a salvage excavation in Jerusalem.  The excavations were conducted at the beginning of the year in the Armon Hanatziv ridge, south of the old city. During the excavations, archaeologist Yaakov Bilig, who led the expedition, uncovered several architectural elements that originally were part of a Biblical palace. Surprisingly, there are almost no remains of the structure itself, yet the shape and style of these artifacts leaves no doubt that these are genuine and royal level ornamentations.

Similar stone artifacts have been found in the past at several major sites from the biblical period, such as Jerusalem itself, Ramat Rachel, Samaria, Megiddo, Hazor, and even sites of the neighboring cultures of Ammon and Moab. In these sites the artifacts were also part of a royal buildings. Being so, it seems that these new finds indicate to another palace that was built opposite Jerusalem some 2800-2600 years ago. But who was so privliged to live in such a complex, with a breathtaking view of Biblical Jerusalem and its Temple?

Who Built the Palace?

Despite the rare state of preservation of the decorative artifacts, there are almost no remains of the structure itself. Bilig suggests that the palace was destroyed in the sixth century BC, perhaps by the Babylonians. The Book of Kings indeed records the destruction of all of Jerusalem by the Babylonians, in 586 BCE. In the following centuries, Bilig speculates, most of the stones of the palace were recycled.

Surprisingly, these beautifully carved artifacts were not taken away as well, perhaps because they were covered somehow and so were unnoticed. They were found in the corner of a room with a plastered floor. Next to it was a toilet. This was all probably part of a larger complex, yet the excavation was limited to a small area. But whose palace was it? In a phone conversation we recently had, Billig suggested this Jerusalem suburban palace was built by King Hezekiah, or one of the kings that succeeded him. 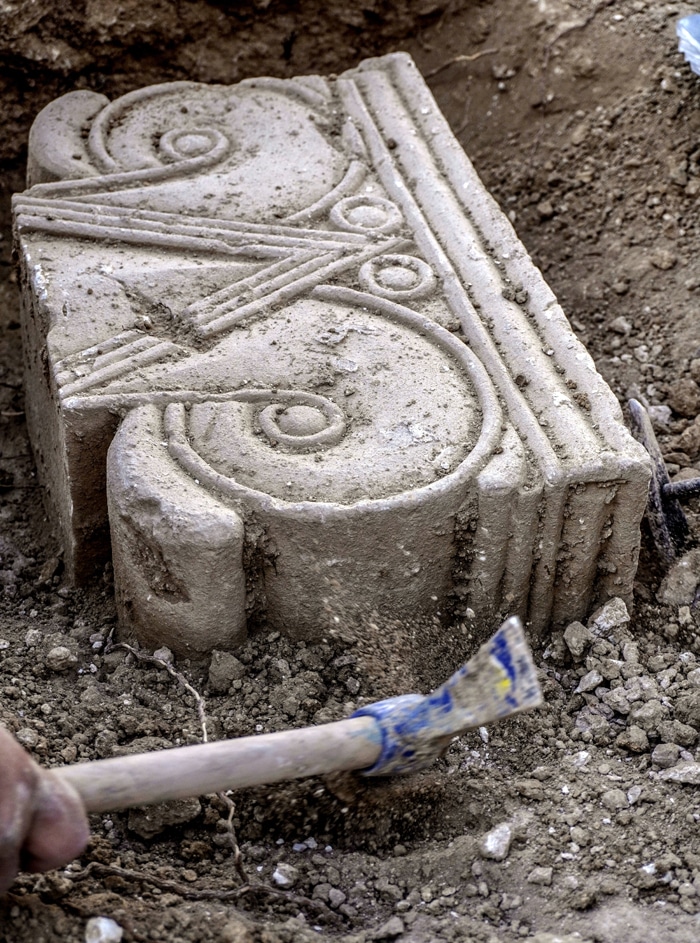 One of the Capitals when Discovered. (C) Shai Halevi IAA

In my opinion ascribing the palace to King Hezekiah and his time has some difficulties. Most of his reign King Hezekiah was preparing for an Assyrian assault. And the attack did take place, in 701 BCE. It left most of the Judean Kingdom in ruins. Sennacherib especially boasted on conquering Lachish. Jerusalem itself was saved thanks to heavy ransom Hezekiah paid, emptying his treasuries. I find it hard to believe that in such a turbulent period Hezekiah found the time, and funding, to build such royal residence.

I believe the palace was built later. Perhaps it was constructed by King Menashe, the son of Hezekiah? Menashe reigned for 55 years, and apparently managed to restore the Judean kingdom. However, unfortunately the Bible gives a very short description of his reign. Another possibility is that the palace was built in the days of his grandson, Josiah. Josiah reigned for 31 years, and in his days the kingdom of Judah spread north, probably as far as Megiddo. Unfortunately, the Book of Kings does not mention Josiah building any new palace as well, yet in the book of Jeremiah we do find a testimony of a new “great palace” built by Josaih’s son – Jehoiakim. Jeremiah disliked Jehoiakim, and his policies, to say the least. Among others, he rebuked him for building “a great palace”, and “by unrighteousness” –

13 “Woe to him who builds his palace by unrighteousness,
his upper rooms by injustice,
making his own people work for nothing,
not paying them for their labor.
14 He says, ‘I will build myself a great palace
with spacious upper rooms.’
So he makes large windows in it,
panels it with cedar
and decorates it in red. (Jeremiah 22:13-14) 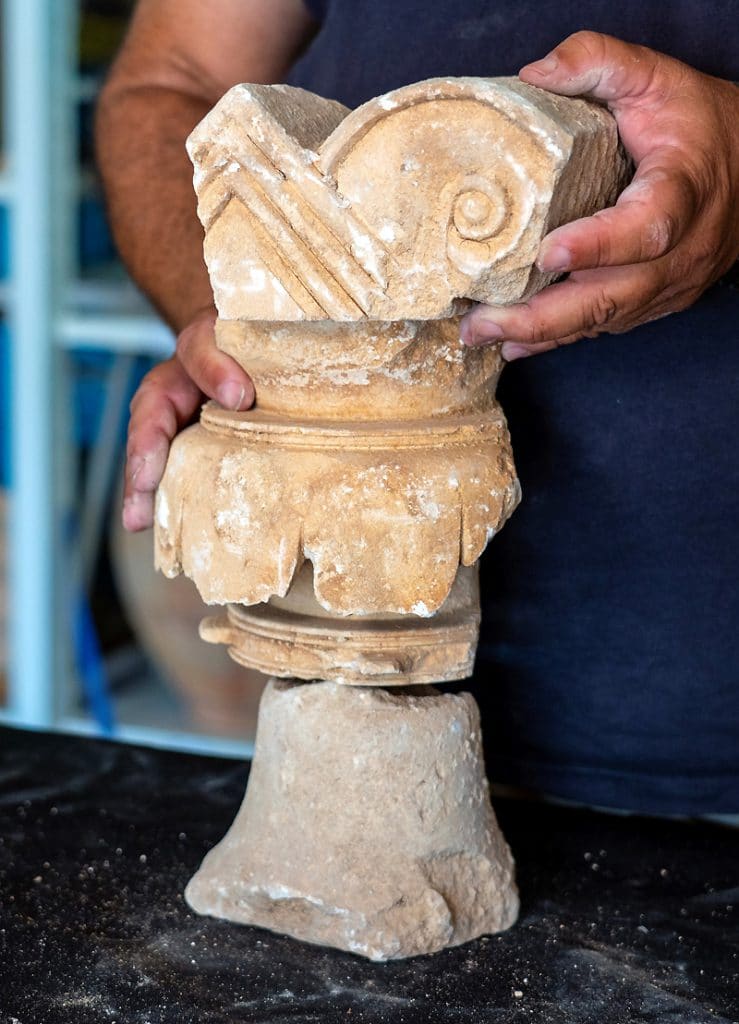 Is this the “great palace” of Jehoiakim that got prophet Jeremiah so upset? Bilig does not rule out this possibility.

It seems that whoever built this palace was not the only one to favor this ridge, facing the old city of Jerusalem. In 1990, a burial cave was uncovered in another salvage excavation along this ridge. It proved to be the burial cave of the high-priest Caiaphas. Caiaphas was a high priest in Jerusalem the first century CE, and his small burial coffin is on display to this day at the Israel Museum. According to the New Testament, Caiaphas was the high priest who interrogated Jesus, and eventually recommended that he will be trialed by the Roman governor Pilatus. Being so, the Christians nickname this ridge “Mount of Evil council”.

Furthermore, after conquering the Holy Land, in the early 20th century the British also desired this ridge. At its highest part they established the headquarters of the British commissioner. The magnificently designed complex was called – “The Commissioner’s Palace”. As the British proved to lead an unbalanced anti-Jewish policy, Jews also started calling this ridge “Mount of evil Council”. Yet, due to the new finds, perhaps it was Jeremiah who first coined this term?