Coins in the New Testament

Among others, the New Testament, and especially the Gospels, are a fascinating source about the coins that circulated in Judea in the first century. Here is a small presentation of some of these coins.

Though it is hard to determine precisely the denominations of bronze coins, Issar was probably the medium-large common bronze coin. Such a coin was minted by King Herod at the end of the 1st century BCE in Judea. The symbols depicted on the coin are enigmatic and a source of much controversy, yet echo well the contradictive nature of Herod himself. 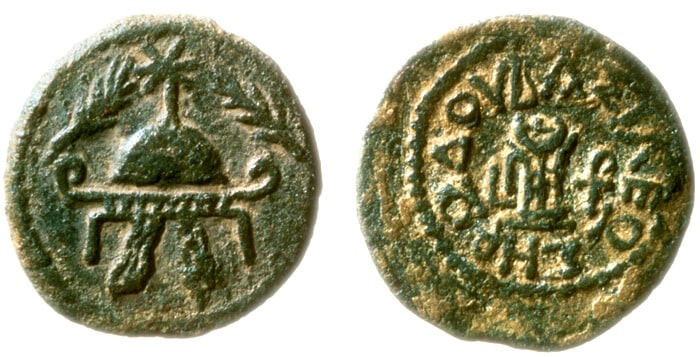 The smallest bronze denomination in Roman currency was the quadranes, which was worth one quarter of an Issar. A quadranes, for instance, is mentioned by Jesus when he wanted to emphasize that a debtor should pay back all his debts, or he would be imprisoned “you [the debtor] will never get out till you have paid the last quadranes” (Matt 5: 26).

Nevertheless in Judea in the 1st century CE, there was an even smaller bronze denomination, a remnant of the previous Greek currency, the lepton. The lepton was the smallest coin in use. Both lepton and quadranes and their relative value are documented in the story of the contribution of the widow, whom Jesus praised. “And he [Jesus] sat down opposite the treasury, and watched the multitude putting money into the treasury. Many rich people put in large sums. And a poor widow came, and put in two leptons, which make a quadranes. And he called his disciples to him, and said to them, ‘Truly, I say to you, this poor widow has put in more than all those who are contributing to the treasury. For they all contributed out of their abundance; but she out of her poverty has put in everything she had, her whole living’” (Mark 12:41-44).

The most common leptons in Judea in the 1st century BCE to 1st century CE were 1.5-2 grams bronze coins minted by the Hasmonean king Alexander Janneus. On the obverse they depicted an eight ray star, and on the reverse the king’s name and title around an anchor.

Silver coins were less common for daily use and were used for larger transactions. The silver Roman Denarius was worth 24 Issar bronze coins, or 192 leptons. A famous reference to a Denarius in the New Testament is done when Jesus was asked about paying taxes (Mark 12:13-17): “And they sent him some of the Pharisees and some of the Herodians, to entrap him in his talk. And they came and said to him: ‘Is it lawful to pay taxes to Caesar, or not? Should we pay them, or should we not?’ But knowing their hypocrisy, he said to them, ‘Why put me to the test? Bring me a denarius and let me look at it.’ And they brought one. And he said to them: ‘Whose likeness and inscription is this?’ They said to him: ‘Caesar’s.’ Jesus said to them, ‘Render to Caesar the things that are Caesar’s, and to God the things that are God’s.’ And they were amazed at him.”

Since Tiberius reigned during the ministry of Jesus, Jesus was probably referring to a Denarius minted by Tiberius. The most common Denarius struck by Tiberius bears on the obverse side the emperor’s portrait, while the reverse shows Livia, Tiberius’s mother, seated and holding an olive branch.

Every Jewish male had to contribute annually half a Shekel to the temple treasuries once he was 20 year old. The origin of this tradition is from the census carried out just after the Exodus: “Each who is numbered in the census shall give half a shekel according to the shekel of the sanctuary, half a shekel as an offering to the Lord. Every one who is numbered in the census, from twenty years old and upward, shall give the Lord’s offering. The rich shall not give more, and the poor shall not give less, than the half shekel, when you give the Lord’s offering to make atonement for yourselves” (Exodus 30:13-15).

The fact that one could pay his annual due only with a Tyrian shekel required changing money if the contributor was not a local. This is probably the source for the money changing “industry” that flourished around the temple in Jerusalem. This activity was heavily criticized by Jesus when he first came to the temple (Mark 11:15-17): “And they [Jesus and his followers] came to Jerusalem. And he entered the temple and began to drive out those who sold and those who bought in the temple, and he overturned the tables of the money-changers and the seats of those who sold pigeons; and he would not allow any one to carry anything through the temple. And he taught, and said to them, ‘Is it not written, “My house shall be called a house of prayer for all the nations”? But you have made it a den of robbers.’” The Tyrian Shekel was probably also the coin used to pay Judas Iscariot for his betrayal of Jesus (Matt 26:14-15): “Then one of the twelve, who was called Judas Iscariot, went to the chief priests and said, ‘What will you give me if I deliver him to you?’ And they paid him thirty pieces of silver.”

Although depicting clear pagan images (the head of Herakles-melkart on the obverse side, and an eagle, the attribute of Zeus, on the reverse side) this was the only type of coin accepted by the priests of the temple in Jerusalem as tax or tribute. The reason is most likely because the coin had a reputation for a constant high silver content. This has been confirmed by modern tests, and indeed the Tyrian shekel always kept a level of nearly 95% silver. Tyrian Shekels are found in almost every excavation in the Holy Land, sometimes in the form of hoards. The largest hoard of Tyrian shekels known is the one found in the 1960s on Mt Carmel in northern Israel. It contains some 3400 coins. The hoard is believed to be a delivery of temple dues from a Jewish community in the Diaspora to Jerusalem, but for an unknown reason never reached its destination.