Presenting Beit-She’an on “The Watchman” Show

Set in a fertile valley, along an important road system and with a water stream passing through it, no wonder Beit-She’an (Hebrew for: The House of She’an) was an important city through most of the historical periods. In 2018, Erick and I visited the site, reviewed its archaeology, and its special links to the Bible.

It’s name indicates that Beit-She’an may have been, at first, a Canaanite city who worshipped the God of She’an. Yet, the Old Testament never mentions this god. In fact, despite the importance of the city, the Bible rarely refers to it. However, Beit-She’an is mentioned in one crucial battle between Saul and the Philistines. The battle itself takes place on the Mountains of Gilboa, about 5 km southwest of Beit-She’an. Yet, after their victory, the Phililstines desecrated the bodies of Saul and his sons, hanging them on the walls of Beit-She’an. Beit-She’an, at that time was confined to the area of its acropolis. However, in Roman times the city became a member of the Decapolis. It was renamed to Nysa-Scythopolis, and with Roman imperial support, it  expanded into the valley beneath.

Although never mentioned in the New Testament, Jesus probably passed through the city on his journeys to Jerusalem. Furthermore, in Byzantine times, a large round church was built on its top. Its shape suggests it commemorated or sanctified a certain relic. Perhaps it was an object associated with Jesus that was found in the city?

In 749 CE, Beit-She’an encountered a massive destruction by a devastating earthquake. The city was much less populated at that time, as a result of the Muslim conquest of the land. But in its city center, Roman monuments were still standing, and markets were still operating. All were destroyed and then abandoned after the earthquake. Their remains would only be uncovered in modern times.

Today, the site is a national park. Its wealth of finds attracts many visitors to stroll among its exposed ruins. The panoramic view of the city from its Roman theater is especially satisyfing, unfolding the city’s long and rich history at a glance. Reaching the acropolis might be a physical challenge, but it is absolutely worth the effort.

A tour of Beit-She’an can be combined with a day tour of the Galilee. 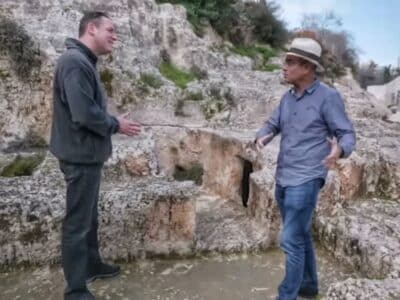