In the 1960s, an archeological expedition from Tel Aviv University made a surprising discovery in the form of a Jewish temple inside the ancient citadel of Tel Arad. The temple consisted of a courtyard with an altar, and a room  bearing two standing stones (Biblical “Massevot”) on a raised platform (“Holy of Holies”). Two incense altars were placed on the steps leading to the standing stone. The temple was abandoned at some point, but in a respectful way. The altars were placed on their side, the standing stones were not broken, and the whole compound was covered with a fill, without desecration.

The common assumption is that this temple operated in addition to the official religious activity in the main temple in Jerusalem. It was a local temple, serving the local garrison of the fort, and perhaps the peasants in its vicinity. 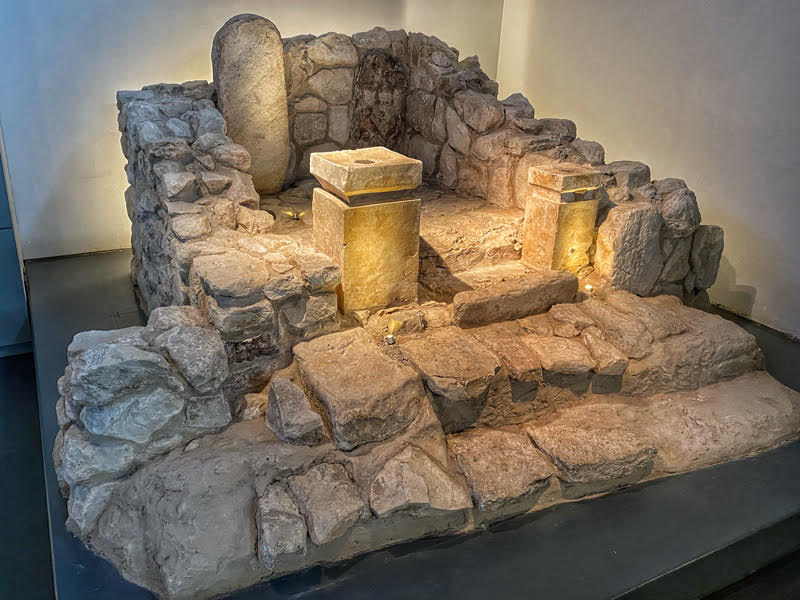 The “Holy of Holies” of the Biblical Temple in Tel Arad rebuilt and displayed at the Israel museum in Jerusalem.

Did God have a Consort?

Instead of the Ark of the Covenant, here the object of worship was a standing stone – a Massebah. And not just one, but two! it seems that a secondary deity was also worshiped in this temple. Who could it be? Much has been researched and written about the Jewish temple of Arad, and I too share the view that it is a temple to the Yahweh, the main god of Judah, combined with a secondary female deity – Ashera. The best evidence for such combined Israelite worship was found in the remote site of Kuntilat Ajrud, nowdays on the Egyptian side of the Sinai Peninsula. This site was excavated and in the 1970s, and among others, it yielded an inscription of dedicatation to “Yahweh of Yemen and his Ashera”.

It seems that the wrath of prophets like Isaiah and Jeremiah, resenting pagan cults of the public was in its place. There is plenty of archaeological evidence to various forms of worship, or different deities, by the Israelites. Evidence of temples, altars and cultic figurines were found in quite a few sites across the Judean Kingdon, and recently even in Jerusalem.

However, in the last parts of the book of Kings we are told of significant reforms against idol worship. The first to abolish pagan worship was King Hezekiah, and some 80 years later, it was repeated by King Josiah. The excavators of Tel Arad concluded that the temple of Arad also went out of use by a royal decree, but the locals buried it in a respectful manner. They did not smash the Masseboth or break the incense altars places in front of them.

The discovery of the altars in one piece also made it possible to study the traces of the incense that was burnt on them, although this was done only recently.

Then the Lord said to Moses, “Take fragrant spices—gum resin, onycha and galbanum—and pure frankincense, all in equal amounts, and make a fragrant blend of incense, the work of a perfumer. It is to be salted and pure and sacred.  Grind some of it to powder and place it in front of the ark of the covenant law in the tent of meeting, where I will meet with you.” (Exodus 30:34-37).

“Gum resin”, “onycha”, “galbanum” and “frankincense” are all translations of the Hebrew names of the spices. Except for frankincense, the identity of the other spices is quite unclear. This study, therefore, is quite significant. It might resolve, for the first time, the botanical identification of the aromatic components in the Jewish Rituals in Biblical times. 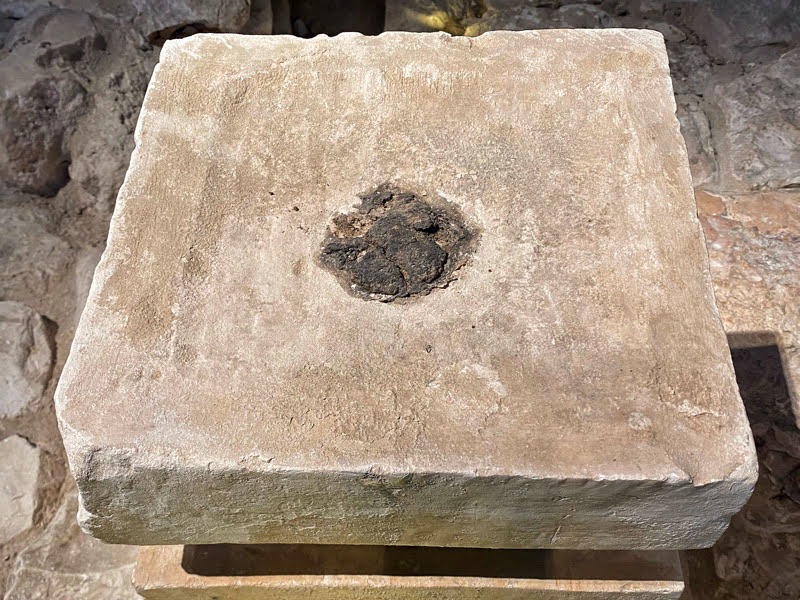 A Top view of one of the Altars from Tel Arad. Traces of burnt incense can still clearly be seen.

The results were quite surprising. On one altar remains of frankincense were traced. But on the other altar, the residue proved to contain traces of – cannabis. This finding is surprising, as it is the first time ever that Cannabis is found in an ancient site anywhere in the Middle East.

If cannabis was indeed in regular use in the temples of the Kingdom of Judah, it presents in a new, somewhat bizarre light, the rituals of sacrificial offerings in biblical times. The aromas of frankincense, cannabis, and the sacrificed animal flesh mingled in the temple space during the worship, surely stirred the senses of the priests and pilgrims alike.