(12/2019) The Location of Placing the Ark of the Covenant in Beth-Shemesh Discovered?

The book of Samuel mainly documents the struggles of the tribes of Israel against the Philistines, a struggle that eventually led to the kingdom by Saul and David, and the creation of Jerusalem as their capital. According to the Bible, the most sacred object of the tribes of Israel was the Ark of the Covenant, which contained the Tablets, the instructions of the God of Israel how to worship it. Given to Moses at Mount Sinai, the tablets in the ark were carried through the wilderness, and once the Israelites of conquered the “Promised Land” the ark was placed first in the Gilgal Worship Center, and later in Shiloh. But during a battle against the Philistines at “Eben Haezer”, Eli, the priest in charge of the Ark of the Covenant in Shiloh, suggested that the ark should be brought to the battlefield and so the God of Israel will secure victory. Indeed, the Ark was brought to the battlefield but not only did it fail to provide the long-awaited victory, it was actually captured by the Philistines (!). Yet soon the Philistines regretted this spoil, as it caused the statue of their chief God, Dagon, to break, and inflicted a plague. The Philistines decided to return the Ark of the Covenant to the Israelites in the city of Beit Shemesh, which is a short distance from the Philistine city of Ekron. This is how the Bible describes how a wagon harnessed by cows with the Ark of the Covenant is sent to back to the Israelites –

“Now the people of Beth Shemesh were reaping their wheat harvest in the valley; and they lifted their eyes and saw the ark, and rejoiced to see it. Then the cart came into the field of Joshua of Beth Shemesh, and stood there; a large stone was there. So they split the wood of the cart and offered the cows as a burnt offering to the Lord. The Levites took down the ark of the Lord and the chest that was with it, in which were the articles of gold, and put them on the large stone. Then the men of Beth Shemesh offered burnt offerings and made sacrifices the same day to the Lord.” (1 Sam. 6:13-15). 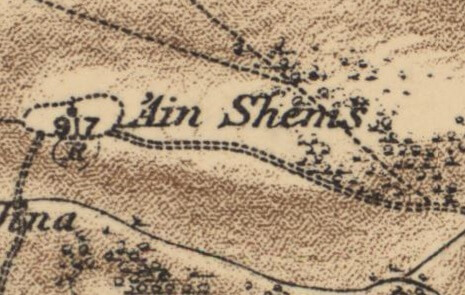 Ancient Beth Shemesh was identified almost two centuries ago by American researcher Edward Robinson at the site named in Arabic “Ein Shams”, which was used by the Arabs during the Ottoman period as a seasonal settlement (“Mazr’ah”). The mound itself was dubbed by the Arabs in Arabic as “The mound of Stones” (“Tel el Roumeilla”).

In 2012, the expedition exposed a unique of find of a room in the northern wing of the site with two large flat stones, with drainage faults. Animal bones were discovered around the complex, and the dating material indicates that it was used in the 11th century BC. When I heard about the discovery, I toyed with the thought that maybe this is the very place where the cows were sacrificed after the return of the Ark of the Covenant. After all, the compound was used in those days, and probably for the purpose of animal sacrifice. Recently, an important, perhaps even incredible, discovery was made nearby. A discovery that reinforces this possibility.

Was the Ark Placed Here? 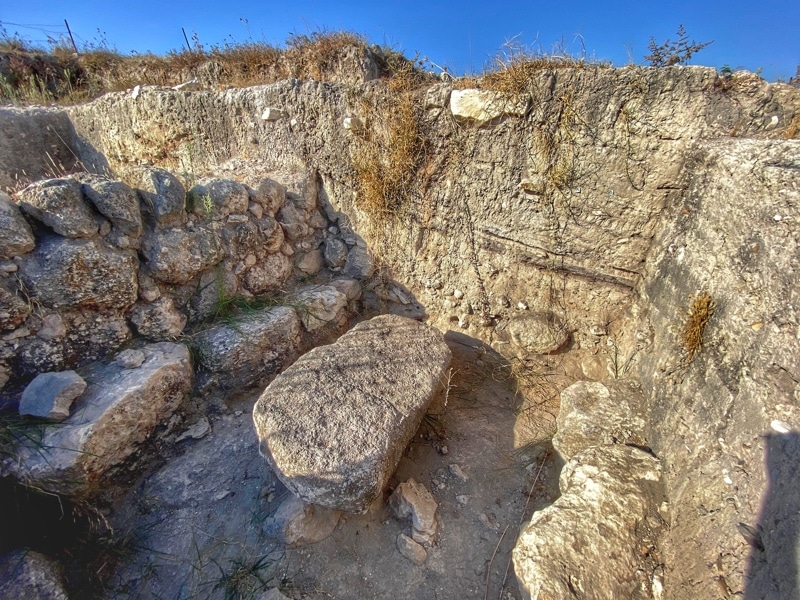 In the last season of excavations at the site (2019), the back of the room with the sacrificial stones was uncovered. The room proved to be of square dimensions, and in its southern end a large stone table like feature was uncovered. This stone table is a unique discovery, and is not known from any other site from this period. Is this the very “large stone” on which the ark was placed upon its return from Philistine captivity??.

According to Dr. Lederman, the excavation manager at the site, this possibility should not be ruled out. Two important facts reinforce this argument – in the square room where the stone table was discovered, stone benches were also installed along the walls. Stone benches from that period are only known in temples. So is the case in the Lachich “fosse” temple, or the temple found in Tel-Qasile, near modern Tel-Aviv.

But more importantly, the dimensions of the Ark of the Covenant according to the Bible are one and a half cubits by two and a half cubits (Exodus 25:23). Archaeological research has shown that the length of a Biblical “cubit” is about 46 cm. The newelly discovered stone is 134 cm by 75 cm, which is a little more than the dimensions of the Ark according to the Bible, but in the same proportions!

So I ask again – Is this the very stone table where the Ark of the Covenant was placed after its return from Philistine captivity?? The text states that the ark was placed on “a large stone”, but it indicates that the stone was in the “field.” Frankly, that seems to me unlikely. It makes more sense that a sacred object that has just been returned from an enemy, will be placed inside the city, not in a field. The phrase “field” in this case might actually mean “yard” in a house. And indeed it seems that the room was never roofed, and was later used as a sheep pen.

If this stone table was indeed used for the Ark of the Covenant, this is one of the most important (and exciting!) archaeological discoveries ever made in the Holy Land.

Contact us for a special guided day tour of the Shephelah, or a themed tour of the search after the ark.

A 2021 tv production presenting the discovery