In a recent article in “Haaretz” a sensational new discovery was presented – a mosaic floor of another church found in Hippos-Sussita. A discovery of an ancient church is not that rare, and four churches were already discovered in Sussita alone, but this was the first to be found at the site with an almost complete mosaic floor intact, and its decoration include fish and baskets, two of baskets even bearing 5  loaves of bread, matching the textual description of the “Miracle of the mulitplication of the loaves and fish (Mark 6).

While it is indeed tempting to suggest that the church was commemorating the miraculous event, one should remember that:

A. The text specifically says that the miracle took place in a “deserted area” (Greek: EREMOS), not in a city (Mark 6:35).

B. The 12 baskets were filled with the left over of the meal, meaning fish and bread (only), not fruits, as appears in the mosaic.

C. The basket at the other site of Tabgha indeed shows only four loaves, but it is presumed that a fifth real loaf of bread was presented on the altar of the church, and given to the visiting pilgrims. 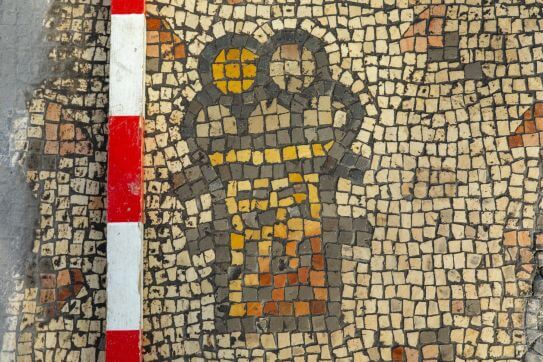 Detail in the “Burnt House” in Hippos-Sussita showing a basket with five round loaves of bread, and image that is possibly linked to the “Miracle of the multiplication of the loaves and Fish (Mark 6). (c) M. Eisenberg

A tour of Sussita can be combined with a tour of the Golan Heights.