Bethphage, “house of the unripe figs” in Aramaic, is mentioned in the synoptic Gospels as the site where Jesus, before entering Jerusalem, sends his disciples to look for a donkey and a colt upon which he enters the capital city (Mat. 21:1-15).

The site of Bethphage is identified on the eastern slopes of the Mount of Olives, east of the old city of Jerusalem. The place is mentioned by pilgrims of the Byzantine period, and sources of the Crusader period describe a church at the site which was built around a big stone identified and sanctified as the rock which Jesus used to step on and sit on the donkey’s back.

During Crusader times a tradition developed of marching in a procession from Bethphage into Jerusalem with palm trees. People whose family name is “Palmer” are believed to be descendants of pilgrims who participated in this ceremony. In 1933 the Franciscans renewed the procession of “Palm Sunday”, and it is held to this day every year before Easter.

In 1954 a new church was also modeled at the site. The Greek-Orthodox also constructed a church nearby, elegant in design and proportions.

Visiting the Churches of Bethphage 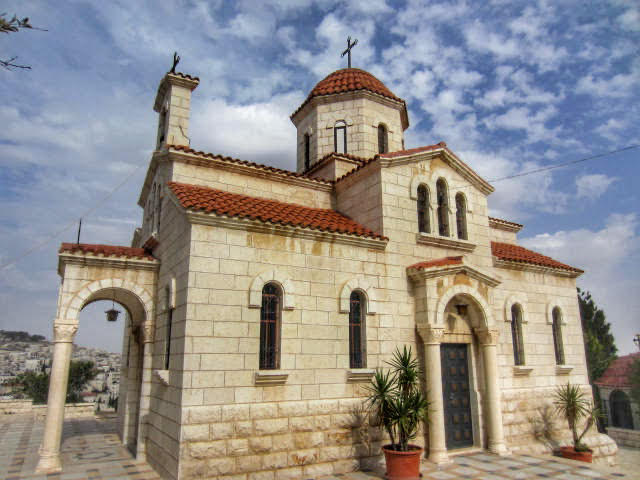 Both churches are near the security fence which was constructed in 2003 to protect Jerusalem from Palestinian terrorist attacks. Perhaps the proximity to the security fence is the main reason only few pilgrim groups visit the site. A proper Christian pilgrimage visit to Jerusalem, intending to walk in the footstep of Jesus, should really start at that spot. Watch also a short video presentation of the site.