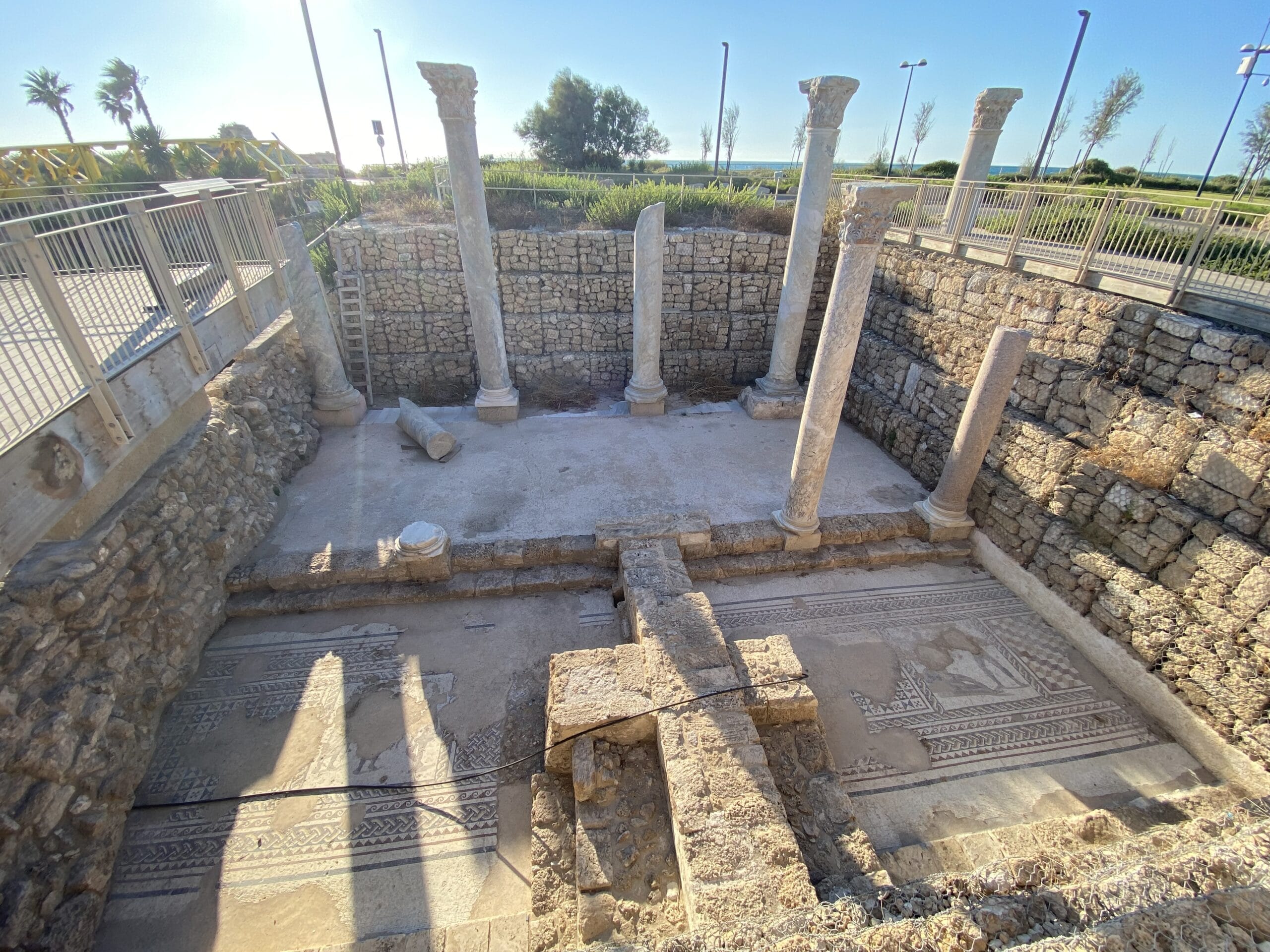 Ancient Caesarea is one of the most popular tour destinations in Israel. Yet around Caesarea’s national park are quite a few more points of interest, often missed by visitors. 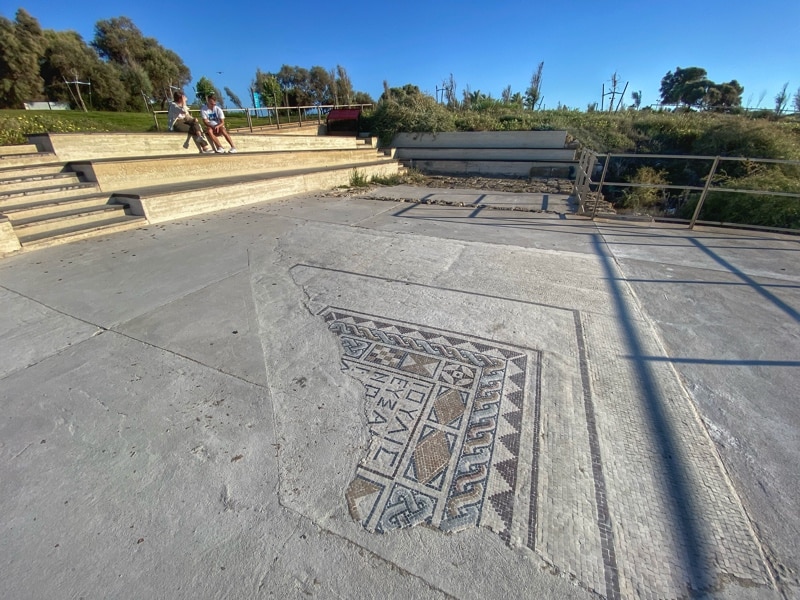 Caesarea’s Ancient Synagogue – Discovered in the 1960s at the beachfront, Caesarea’s ancient synagogue operated for a few centuries. Five successive layers of use were detected in the building. The most impressive was a layer bearing a mosaic floor with a dedication to a benefactor ‘Barillos’. Its earliest level dates back to the first century CE. Being so, this synagogue might relate to the conflict between the Jews and the Pagans of Caesarea in 66CE, an event that led to the Big Jewish Rebellion (66CE-70CE).

Rabbi Abbahu Tomb Mark – Not far from the synagogue, and facing Caesarea’s medieval walls, a recent Jewish tradition marks a Bosnian Muslim tomb as the Tomb Mark of Rabbi Abbahu. Rabbi Abbahu was a significant ‘Amora’ who lived in Caesarea in the second century CE.

Caesarea’s Aqueduct – Half a mile north of the national park, impressive remains of Caesarea’s aqueduct along the coastline were exposed in the 1960s. In Roman and Byzantine times this aqueduct delivered fresh water from springs in the Carmel, about 17 miles north of Caesarea, straight into the city.

Caesarea’s Birds Mosaic Mansion – Discovered by chance in 1950, the mansion was a 5th century Villa Sub Urbana, whose main hall was decorated with a colorful mosaic floor, depicting mostly birds. When re-exposed in 2005 a rare and stunningly beautiful glass-gold panel was found in one of its rooms next to the main courtyard. After restoration and loan to the MOMA in NY, the panel is now on display at the glass pavilion in the Eretz-Israel Museum in Tel-Aviv.

Caesarea’s Byzantine Street – A section of the Byzantine Caesarea is almost hidden outside the national park, behind its parking lot. Two colossal size sculptures decorate a wide avenue, which was restored in the 6th century, according to a Greek inscription found in its mosaic floor. Although the heads of the sculptures are missing, it is quite likely that the white marble sculpture is of Zeus, and the Red Porphyry is of Emperor Hadrian.

Caesarea’s Eastern Hippodrome – East of the Byzantine street, among banana groves, Caesarea’s Eastern horse racetrack (hippodrome) was once a very popular show. Today, only the general layout of the racetrack is visible, although a stone obelisk that once decorated the hippodrome’s spina has been re-erected. 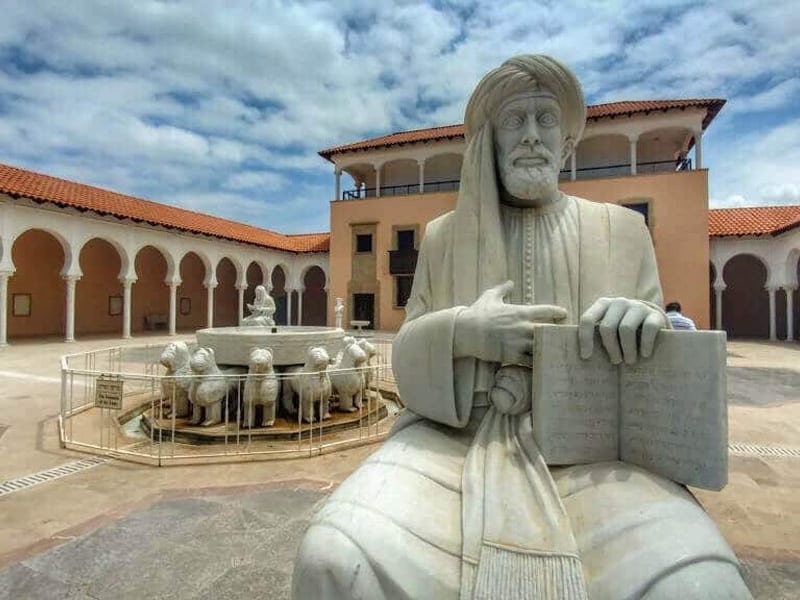 Caesarea’s Ralli Museum – An art and archaeology museum in the modern town of Caesarea. Its special Latin-American design exhibits a unique combination of Latin American and Jewish themed artwork, as well as some archaeological artifacts found in Caesarea.

Sdot-Yam Archaeological Museum – A hidden gem in a kibbutz, adjacent to Caesarea’s national park, presents various chance finds made in Caesarea before its official excavations began. The diverse exhibits, that include some big sized mosaic floors and marble sculpture, encapsulates Caesarea’s glorified past in a truly a remarkable way.

Hanna Szenes House – Hannah Szenes immigrated to Israel from Hungary in the 1930s and settled in Kibbutz Sdot-Yam, right next to Caesarea. During the Second World War, she volunteered to be parachuted into Hungary, to fight the Nazis and hopefully rescue her mother. Unfortunately, she was captured, tortured, and executed. Hanna was also a gifted poet, and some of her poems are familiar to every Israeli to this day.

A tour of the hidden gems around Caesarea can be combined with a tour of the Caesarea’s National park, including some optional extreme activities.