Home  >  Places to visit in Northern Israel   >  Kursi, Site of the Miracle of the Swine

Kursi, Site of the Miracle of the Swine Kursi is a picturesque site on the eastern side of the Sea of Galilee, at the foothill of the Golan Heights. Discovered by chance in 1967, the site apparently marks and commemorates the Miracle of the Swine.

The Miracle of the Swine

After leaving Nazareth, Jesus moved to Capernaum, where he spent a few years. From Capernaum he traveled to nearby sites, as well as distant destinations like Tyre and Sidon, and the region of the Decapolis. During one of his journeys, Jesus reached a site on the shore of the Sea of Galilee, where he was accosted by a person (or two) “possessed by Demons”. Jesus caused the demons to occupy a herd of swine “and the herd, numbering about two thousand, rushed down the steep bank into the sea, and were drowned in the sea. The swineherds ran off and told it in the city and in the country” (Mark 5:13-14).

The location of this event is unclear. Each of the synoptic Gospels provides a different name for the region in which the miracle took place: “The land of the Gadareans” according to Matthew; “Geraseans” according to Mark; and “Gergseans” according to Luke.  One thing is clear – the event did NOT take place in an area populated by Jews. It is impossible that in antiquity Jews raised swine. For a long time, it was believed that no Christian tradition has ever identified and sanctified the location of the miracle.  None of the ancient itineraries of pilgrims from the Byzantine and Crusader periods mention visiting such a site, nor was there ever a local tradition among the Christians in the Holy Land. The expedition of Tsaferis, however, proved there actually was such a tradition, at the site of Kursi.

The Discovery of Kursi

Kursi was discovered by chance after the Six Day War (June 1967). After the war, a plan to construct a road on the eastern side of the Sea of Galilee was executed. But as the tractors were clearing the way, Mendel Nun, a member of a nearby kibbutz, noticed that the tractors were cutting through ancient remains. Mendel persuaded the authorities to halt the work, and an archaeological expedition exposed much of the site between 1970 and 1974. Head of the expedition was Vasilios Tsaferis, a former Greek monk who became an archaeologist working for the state of Israel. It seems that it was directed from above that he of all archaeologists would reveal the site, where according to Christian tradition Jesus performed “the miracle of the Swine”. 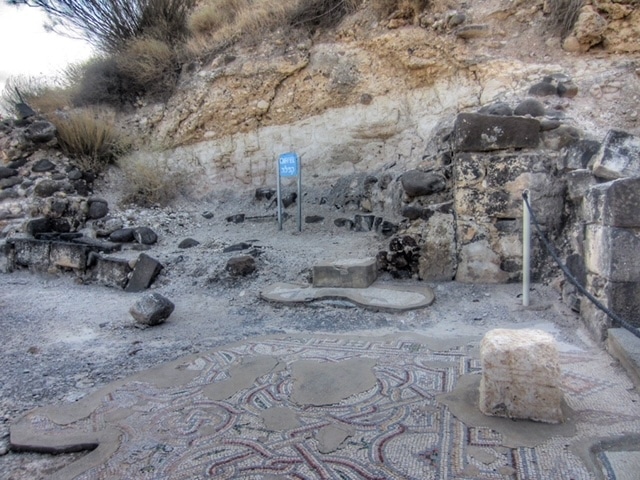 Today, Kursi is a national park. The most prominent feature at the site is a monastery complex from the 6th century CE. The monastery complex included a big tri-apsidal church with a large rectangular courtyard in front of it (Atrium), and many service rooms around it.  In one of the rooms a large oil press was recovered. The whole complex was surrounded by a wall, which covered an area of 4 acres, making it the largest monastic complex ever found in Israel. The importance of the site, however, was revealed later, in 1980, when Tsaferis surveyed the area around the monastery. On top of the cliff above the monastery a small chapel in front of a cave was discovered. After partial excavation it was clear the cave had been sanctified in antiquity as the cave where the person “possessed by demons” dwelt. Kursi is a common stop for tourists and pilgrim groups. It offers a unique combination of well-preserved remains of a Christian complex, mixed with sanctity on a cliff top, and next to the shores of the Sea of Galilee.

A tour of Kursi can be combined with a guided day tour of the Galilee.

Contact us to inquire more about a private tour to Kursi: