Home  >  Newsletter   >  Who Built the ‘White’ Synagogue in Capernaum?

Who Built the ‘White’ Synagogue in Capernaum? The village of Capernaum is an archaeological site that is a major Christian pilgrimage destination in northern Israel. Jesus live in Capernaum for about three years, and in and around Capernaum he laid the foundations of early Christianity. Capernaum’s synagogue is mentioned several times in the Gospels, and there is no doubt that such an institution existed in Capernaum in antiquity.

Ancient Capernaum has been excavated by several archaeological expeditions. Its synagogue in antiquity was uncovered in the center of the village. It is in fact the biggest and most grand synagogue ever found in Israel from antiquity. Built of white limestone ashlar stones, it is also known as the ‘White’ Synagogue.

But does it date to the time of Jesus? 25,000 (!) small bronze coins found under the ‘white’ synagogue’s floor, indicate it was built around the 5th century, some 500 years after the time of Jesus. However, beneath the floor and the coins deposits, the archaeologists also uncovered foundations of an earlier public building, undoubtfully the 1st century synagogue of Capernaum.

In the 5th century the Holy Land was mostly Christian, and its holy Christian sites were all turned into churches and were major pilgrimage destinations. Being so, the fact that Capernaum’s 1st century synagogue was not turned into a church in the 5th century is surprising. Furthermore, a big Octagonal church was built next to it during the Byzantine period, demonstrating Capernaum was indeed sanctified and venerated by Christians during that time.

It is indeed difficult explain that there was a Jewish community in Capernaum in the Byzantine period, that it was wealthy, and that it was permitted to build a synagogue at what the Christian world considers to this day as a holy Christian site.

Uri Zvi Ma’oz, an Israeli archaeologist specializing in ancient synagogues in Israel, published a very interesting and creative solution for the discrepancy of the synagogue of Capernaum. In his opinion, Jews never built and used that synagogue. He suggests that it was erected by – Christians. It was not a functioning synagogue, but a memorial monument, commemorating the location of Capernaum’s synagogue in the time of Jesus. They recycled decorated stones from Roman times found in the area and created more entrances than a synagogue really needed. The lack of any rooftiles also attest that they did not bother to erect a roof over it. He also notes that despite the rich testimony of Jews in this region in the Talmud, it never mentions a Jewish community in Capernaum.

While Maoz’s theory is intriguing, it does not explain several facts:

* Why is there is a commemoration inscription, in Aramaic, chiseled on one of the Synagogue’s pillars? In the 5th century Christians in the Galilee only spoke Greek. Jews also spoke Aramaic. Being so the inscription was undoubtfully made by a Jew.

* The synagogue is decorated with several Jewish symbols, but no Christian symbols at all. If Christians were to build the synagogue, I would expect at least a combination of both. 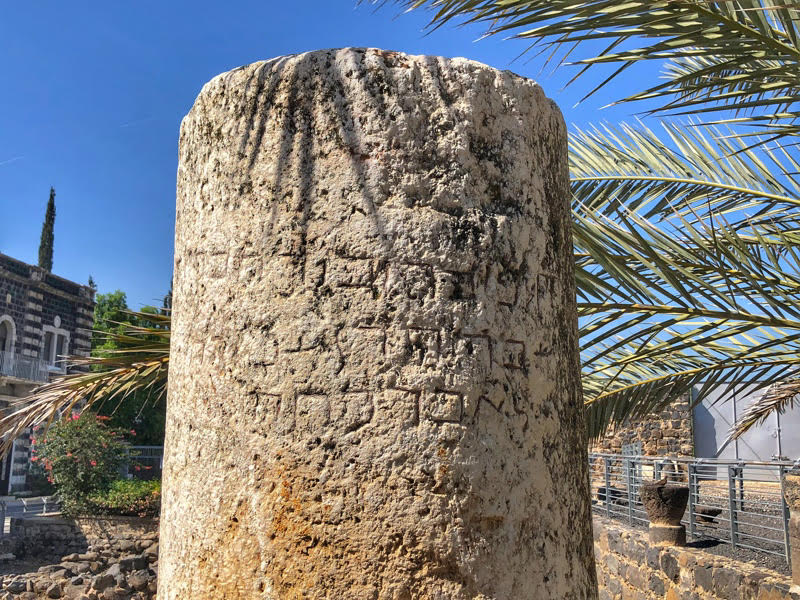 * In Hamat Gader, a thermal springs complex at the southern end of the Sea of Galilee, an ancient synagogue was uncovered. It’s mosaic floor included several dedicatory inscriptions. One of them was to a Jew from Capernaum. This proved Jews did live in Capernaum in the Byzantine period. Moreover, it suggests that some were quite wealthy and could afford donating to other communities’ synagogues.

So Who Built the ‘White’ Synagogue in Capernaum, and How Could He Afford It?

In my opinion Capernaum’s synagogue was indeed built by Jews. Moreover, their source of wealth, strangely enough,  were Christian pilgrims. Being such a significant site to the Christian world, many went through the effort of visiting the site. The local Jews provided them food and accommodation services, and so gained enough wealth to erect a grand synagogue. Perhaps the Christian authorities even supported this, as from a Christian point of view the monument was also commemorating Jesus, his teachings, and his miracles.

Contact us for a private tour to Capernaum and other sites in the vicinity.