Princess Alice of Battenberg is a remarkable figure in the royal history of Europe. Born in 1885 in Windsor Castle, London to Second degree cousins (Ludwig von Battenberg and Victoria Princess of Hesse), it is perhaps not that surprising that she was death from birth. In 1903, when she was only 18 years old, Princess Alice was married to Andreas Prince of Greece, who she met a year earlier at the Coronation ceremony of Edward VII in London. The couple had four children, before being ousted in 1917 by Constantine, brother of Andrews from the Greek throne. Andreas and Alice migrated to Switzerland, but in 1920 returned to Greece and settled in Corfu. At this time, they had a fifth son, Philip, who would later marry Elizabeth the Queen of England, to whom he is married to this day (2020).

In the 1920s Alice left the Anglican Church and joined the Greek Orthodox Church, the main Christian denomination in Greece. Alice claimed to have been blessed with healing abilities and reported of several revelations of Jesus to her. Her Doctors diagnosis was somewhat different and in 1930 she was diagnosed with schizophrenia and hospitalized in a sanatorium in Switzerland and treated by Sigmund Freud for two years. After her release, Princess Alice returned to Greece, became a nun, and devoted her life to charitable activities in Athens at the “Order of the Christian Sisters of Mary and Martha.” Alice’s husband abandoned her and her youngest son Philip grew up with family members in England and was destined to be an officer in the British Navy.

Princess Alice as “Righteous among the Nations”

During the Nazi occupation, there were thousands of Jews in Athens who sought refuge from the Gestapo, who deported most of the Greek Jews to extermination camps. At that time, Alice hid the Jewish widow Rachel Cohen with two of her five children. Rachel’s husband, Chaimki Cohen, served King Georgius I in 1913, and in return the king promised him any help he needed. Alice respected her father-in-law’s promise and rescued the Cohen family from the Nazis and. In 1994 she received the title “Righteous Among the Nations” from Yad Vashem. Her two children, Philip and Sofia, planted a tree in her honor at the memorial complex in Jerusalem.

The Tomb of Princess Alice in Jerusalem

In 1967 the instability returned to Greece and a military coup led to the ousting of Constantine King of Greece. Her son Philip and his wife Queen Elizabeth succeeded in smuggling Princess Alice out of Greece, and invited her to join them at Buckingham Palace in London. Princess Alice died at Buckingham Palace on December 5th 1969 and was buried in Windsor castle. Yet her will revealed that her last request was to be buried in Jerusalem, at the Russian Orthodox Church of Mary Magdalene on Mount of Olives. In 1988, Princess Alice’s coffin was moved to Jerusalem for final rest. 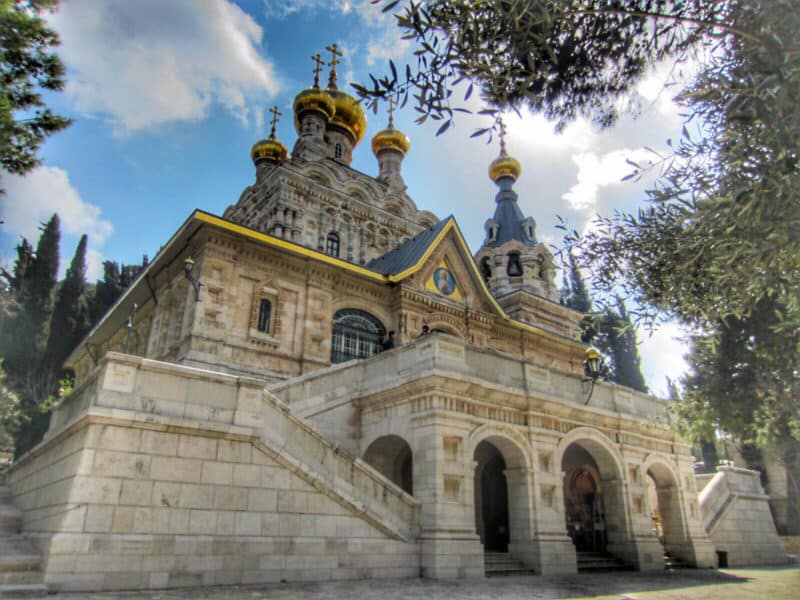 What was the reason for this request from Princess Alice?

Princess Alice’s aunt Elizabeth princess of Hesse, who was known for her beauty, married in 1884 the Russian prince Sergei Alexandrovich and in Russia was nicknamed “Elizaveta Feodorovna”. After the murder of her husband in 1905 , in her grieve Elizabeth sold all her jewelry and opened a convent that was the first ever in Russia to have a hospital, a chapel, a pharmacy, and an orphanage.

Her Christian piety also stemmed from her visit to the Holy Land in 1888 to inaugurate the Mary Magdalene Church in the Mount of Olives, a visit that profoundly affected her, until she requested that she be buried in the same church after her death. Years later her niece, Princess Alice would ask to be buried there as well.

Elizabeth was murdered in 1918 during the Bulshevik revolution, together with all members of the Tsar Family, but later her body was smuggled out of Russia, and following her will, in 1920 her body was brought for final rest in the Church of Mary Magdalene  in Jerusalem, where it is on display at the main hall of the church to this day.

Princess Alice’s tomb on the other hand is in a crypt beneath the church, behind a big wooden door, and is not accessible to the general public. Nevertheless, last month my partner, Fredi Wiesner visited the site, and to his surprise the nuns complied with his guests’ request from England to see the grave. 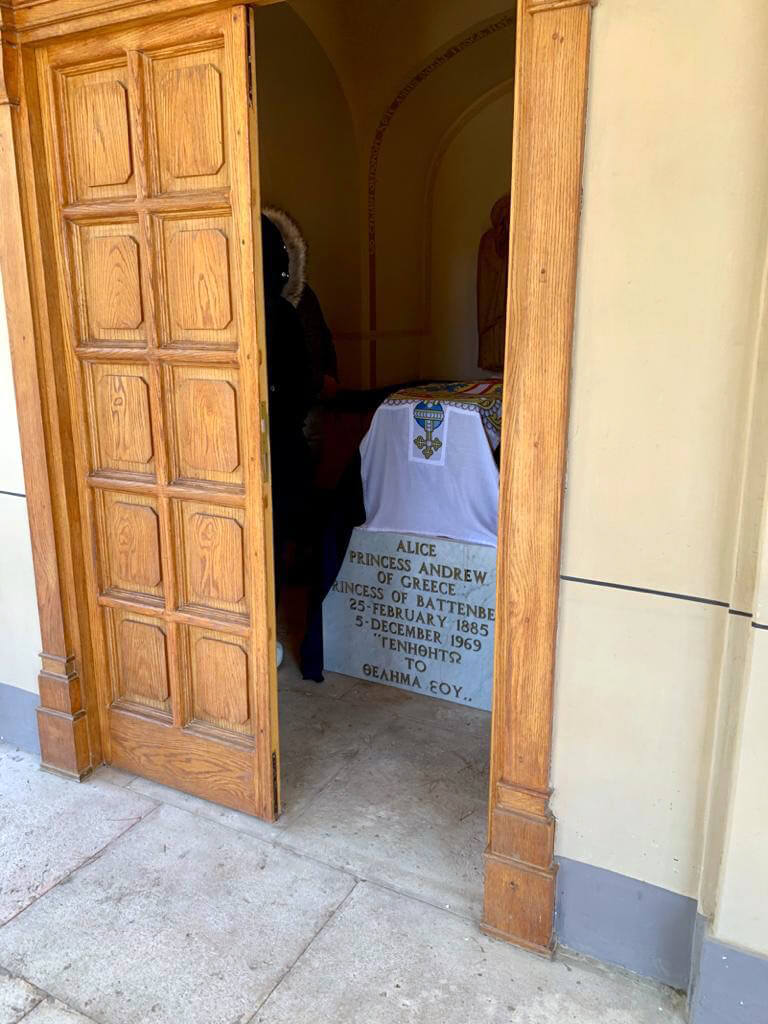 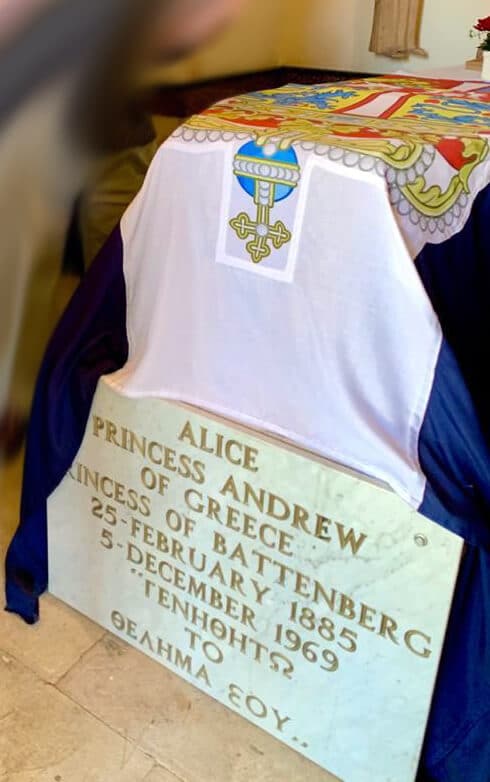 Close up of Princess Alice Tomb in Jerusalem. Photo by Fredi Wiesner.

The most famous visitors to Princess Alice tomb in recent years are her grandson, Prince Charles, who semi secretly visited the site after attending the funeral of Shimon Peres in 2016. In 2018 his son, Prince William, also visited the site. 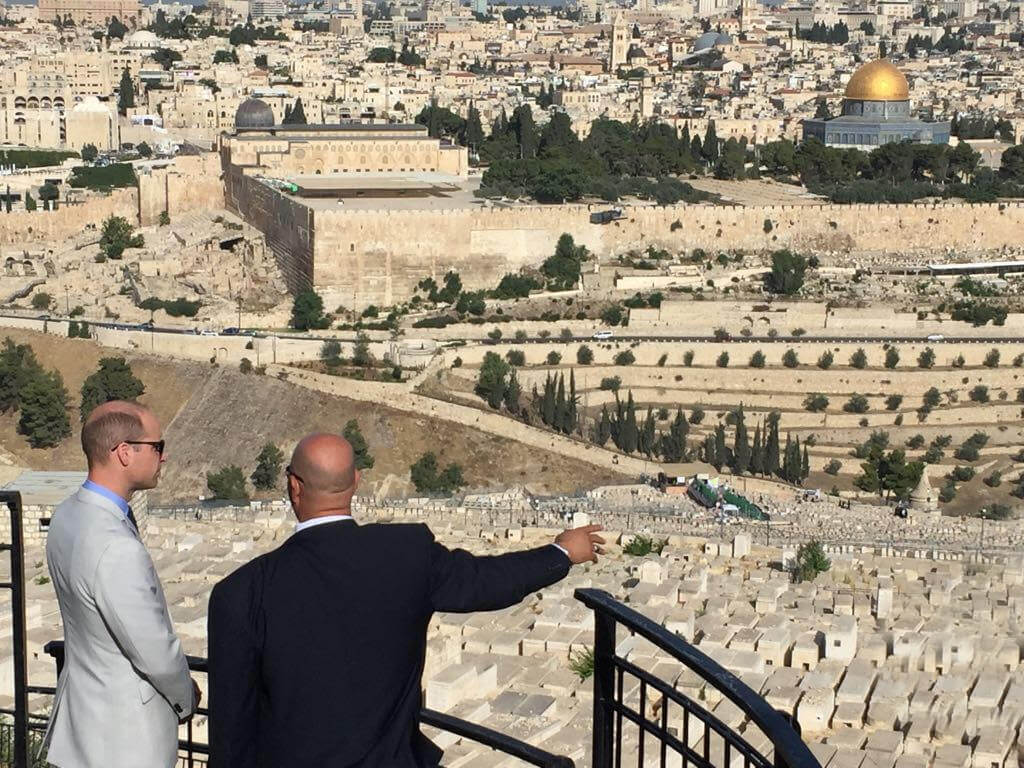 My team member, Tour Guide Tareq, guiding Prince William during his visit to Jerusalem in 2018