Ziklag was was Biblical town within the kingdom of Achish , the Philistine king of Gath, and later part of the kingdom of Judah. According to the book of Samuel (I Sam. 17), although David slew Goliath, a native of Gat, he later approached Achish, king of Gat, seeking asylum from Saul. Achish gave him the site of Ziklag, where David and 600 of his man and their families settled for 16 months. David then raided against other villages, acting more like a bandit, and later even attempted to join Achish and a philistine army to fight Saul. His request however was denied by the Philistine generals fearing he could be a double agent. But while David and his warriors were away, Amalekites raided on Ziklag, destroyed the site and abducted its people and livestock, including two of David’s wives. Chasing them David managed to defeat the Amalekites, free his people, mostly women and children, and return to Ziklag with even more then his original wealth. David then wisely distributed the spoils among “The elders of Judah”, a critical move to gain acknowledgement of his authority among the people of Judah (I Sam. 30). Later Saul, and most of his sons, die in a battle against the Philistine in the Gilboa, and when David receives this report in Ziklag he states the famous lamentation:

David then moves to Hebron, and crowns himself as king Judah, and later king of all of Israel. Ziklag will not be mentioned again in the Book of Samuel or the book of Kings, but it seems fair to label Ziklag as the first capital of David. The last mention of Ziklag is in the book of Nehemiah who indicates Ziklag was resettled when the Jews returned from Babylonian exile (“the Return to Zion”, Nehemiah 11:28).

In the 19th century, a first attempt was made to identify Ziklag at Elusa / Haluza, some 20 km SE of Beer-Sheva, yet later excavations proved the site was not inhabited by Philistines or Israelites. Other scholars suggested to identify Ziklag at Tel Halif, Tel Shera, Tel Sheva, and Tel Zayit, yet non have provided clear proof for their claim. An archaeological expedition excavating a site called Khirbet e-Ra’i, some 45 Km north of Beer-Sheva, and 10 km south of Biblical Gat (Tel Safit), and 3 km west of Lachish is now proposing to identify the site with Ziklag .

Khirbet e-Ra’i is located on a strategic hilltop at the Southern Shephelah, viewing much of the southern coastal plain, monitoring the important ancient “International highway” (“Via Maris”) that once connected Egypt with Mesopotamia. The expedition, headed by Prof. Y. Garfinkel from the Hebrew University, Sa’ar Ganor from the Israel Antiquities Authority, and  Dr. Y. Keimer of Macquarie University in Sydney, uncovered some 1000 sq.m. so far, with clear evidence of Philistine-era settlement from the 12-11th centuries BCE, replaced by an early 10th century BCE rural settlement. This layer was was terminated by a destruction layer, which the excavators associate with the Amalekite raid on Ziklag. The site even has some remains from the Persian period, matching the description in the book of Nehemiah of Ziklag being resettled in Persian times. 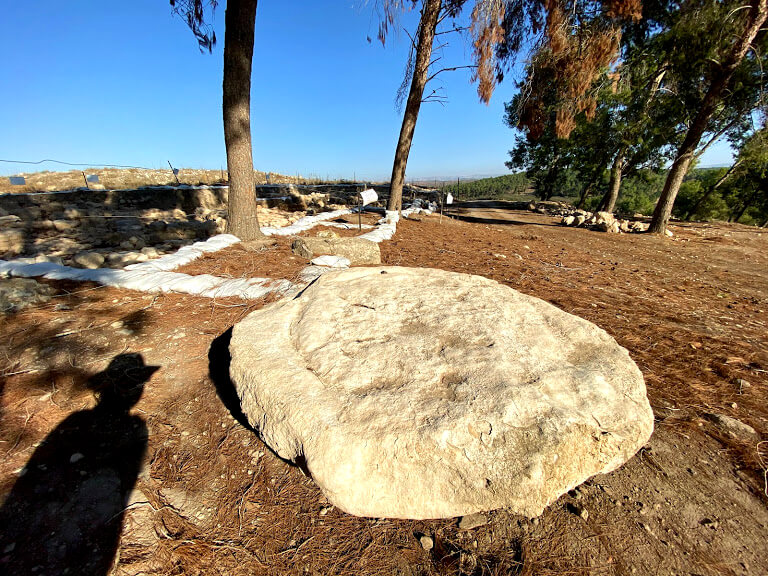 The main problem of this new hypothesis is that the Bible seems to imply that Ziklag should be much further south. Joshua 19:5 states Ziklag was in the lot of the tribe of Shimon, and so should be much closer to Beer-sheva, and Joshua 15:31  states Ziklag in the lot of the tribe of Judah, but should also be not far from Beer-Sheva. If it was next to Lachish, it should have been mentioned in Joshua 15:33-39. On the other I Sam. 27 indicates Ziklag was under the control of Achish, the Philistine king of Gat, and Khirbet e-Ra’i is just 10 km south of Biblical Gat (Tel Tsafit). The site also yielded very little Philistine pottery, but was settles in Philitine times. Perhaps these were remnants of the Canaanites now under the power of Achish king of Gat? In any case the place name “Ziklag” is not semitic, which also seems to allude Philistine identity, and indeed Khirbet e-Ra’i was not settles before the 12th Century BCE. In a visit to the site this month, I was excited to see some architectural remains of what may have been a big Philistine mastered administration building. One wall was 1.5 meters wide (!). But what struck me most was a big round slab of stone with grooves on its perimeter. It may have been a stone designed for animal slaughter and sacrifice. Perhaps on this stone David slaughtered an animal in celebrations of retrieving Ziklag after the raid of the Amalekites??.. I too await for a proper scientific publication of the of the expedition to have a better understanding of this new exciting site!

A visit to the site of Kh. e-Rai can be combined with a day tour of the Shephelah.