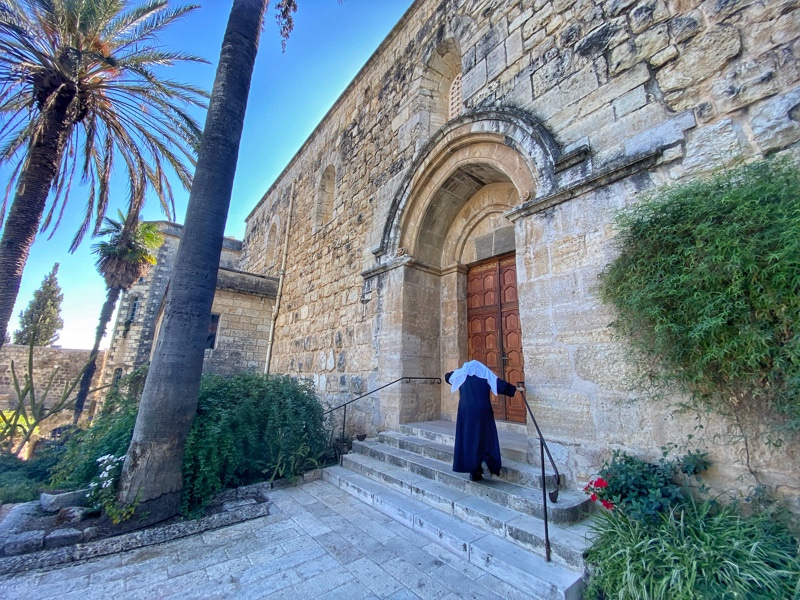 Located in the heart of an Arab village 10 km west of Jerusalem, the Abu Ghosh church is possibly the best example of ecclesiastical architecture in the Holy Land from the time of the Crusaders.

History of the Abu-Ghosh Church

The area was inhabited already in Neolithic times, some 6,000 years ago, and was possibly part of the Canaanite city of Kiryat Ba’al which was later renamed Kiryat Ya’arim (Jos. 18:14). The book of Samuel records the ark of the covenant kept Kiryat Ya’arim for 20 years (1 Sam. 7), until it was taken by David to Jerusalem (2 Sam. 6).

In the Roman period a garrison of the Tenth legion was stationed at the site. It built a pool around a spring to collect its water. This pool was later incorporated in the Church’s crypt. In the 9th century the Muslims built an inn west of the spring, of which there are almost no remains today. In the 1140’s the order of the Hospitallers erected a large basilical church above the spring, designed in a transitional late Romanesque – Early Gothic style. The church was named “The Church of the Resurrection” and the site was associated by some with Emmaus, where Jesus appeared after his resurrection (Luke 24:13-35). In the 1170’s the church walls were decorated with detailed frescoes, that have been remarkably preserved.

Where was Emmaus and did the Abu Ghosh church really relate to it?

Emmaus is mentioned in the New Testament only in the last chapter of the Gospel of Luke. Luke records Jesus appearing to two people on their way to the village. They invite him for a meal, but when he cuts the bread, they realize who he is, and he disappears. An ancient site by the name of Emmaus is known to be about 30 km west of Jerusalem, and until the 20th there was an Arab village by the name ‘Amwas, preserving the memory of ancient Emmaus. Yet according to the New Testament, Emmaus was about 11 km away from Jerusalem. This led a few Crusader era pilgrims to suggest locating Emmaus at the spring of Abu Ghosh (namely Belard of Ascoli, and Theodoric). Yet, none of them mention the church. Furthermore, none of the frescoes preserved in the church relate to Jesus’ appearance in Emmaus! Despite the popular belief, it is quite possible that the Crusaders church in Abu Ghosh doesn’t really relate to Emmaus, or any other local event. 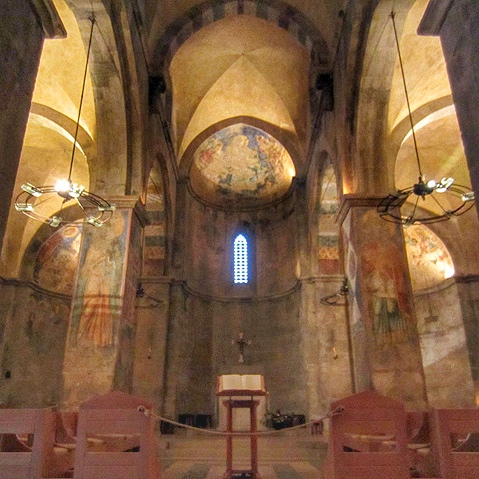 The Crusaders were expelled by Saladin in 1187, and in the 14th century the Mamluks built a mosque adjacent to the abandoned church. Some of the pilgrims passing through the village In the Mamluk and Ottomans periods associated the church with Jeremiah and his hometown, Anatot (Jeremiah 1:1). However, Anatot was east of Jerusalem, at today’s Anatah village. After years of neglect, the Church was purchased by France in 1873. In 1901, after building an abbey next to it, the church was given to the Benedictine order, who maintains the site to this day. When restoring the church, Crusaders era colorful frescoes were uncovered on its walls, and almost completely intact. To this day they are the one of the best examples of Crusaders artwork in the Holy Land. The subjects are Christian themes and decorative patterns. 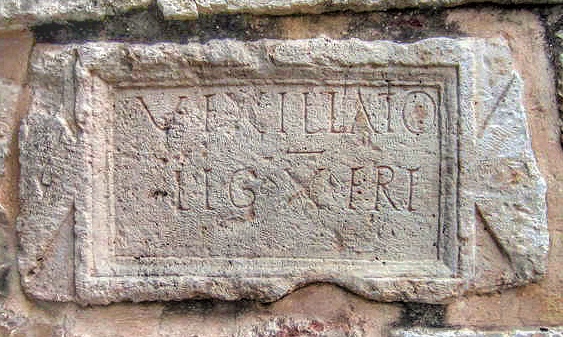 The Church is open Monday to Saturday in the morning and in the afternoon. Entry is free, but visitors are requested to follow a modest dress code. Several archaeological objects are on display in the churches’ courtyard, including an inscribed Roman milestone from 162 CE. Another Latin inscription engraved on a stone next to the lower entry documents a detachment (vexillatio) of the Roman Tenth legion. But most remarkable is the main hall of the church with its colorful frescoes. The church is also known for its acoustics.

If visiting the church towards lunch time don’t miss the lunch opportunity at Naji Kebab around the corner. CNN travel ranked it among the top 10 Kebab restaurants in the world. The village is also famous for its Hummus.

A tour of the Crusaders era church in Abu Ghosh can be combined in a guided day tour of Jerusalem.

Contact us to inquire more about a private tour of Abu Ghosh: