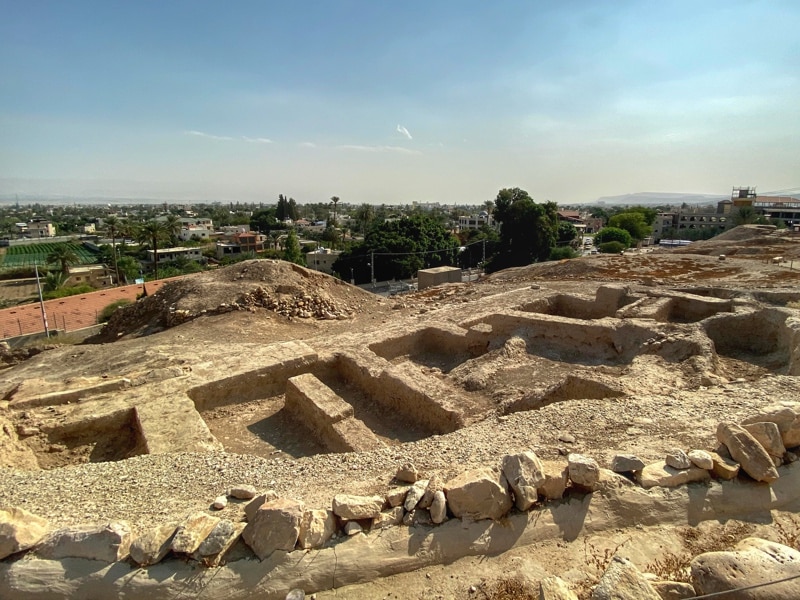 Set in the northeast part of modern day Jericho, ‘Tel es-Sultan’ (in Arabic ‘Sultan’s hill’) is the archaeological site of Biblical Jericho. Famed for its destruction by the Israelites (Joshua chapter 6), Tel es-Sultan has been excavated since the 19th century and is still under investigation. Today, as an archaeological park with a lengthy history and 20 layers of occupation, Tel es-sultan is one of the most popular tour destinations in Jericho.

The book of Joshua records Jericho as a formidable Canaanite city. Nevertheless, through divine intervention, its walls came tumbling down. Except for Rahab, Joshua and the Israelites massacred Jericho’s residents and destroyed the city. In the 19th century archaeologists started digging at the site, searching for the Canaanite destruction layer. Despite all the research, to this day no clear evidence has been traced from Joshua’s time. On the other hand, quite a few other significant discoveries were made at the site, and especially from the Neolithic period. Tracing remains of a permanent settlement from 10,000 years ago make Jericho one of the oldest cities in the World. With several water sources next to the mound, it is possible that irrigation was invented in Jericho, leading to agricultural revolution. By the 4th millennium BCE the city had a clear urban culture, yet it collapsed by the 15th century BCE. Scholars suggest that its ruins inspired biblical-era writers to create an etiological story and attribute its abandonment to an invented Israelite past victory.

Today Tel es-Sultan is an archaeological park and a UNESCO World Heritage Stie. It is maintained by the Palestinian Authority and has an entry fee. Several plaques across the site provide explanations of the visible architectural remains and their historical context. Next to the site, a cable car station provides a scenic ride above the mound and up to the foot of the Monastery of the Temptation.

A tour of Tel es-Sultan can be combined with a tour of Jericho and its Surroundings.