Nestling in the pastoral mountains of Samaria, Bethel was a significant site in biblical times. It was where Jacob dreamt of a ladder reaching the heavens, and later was the seat of the Ark. Identified at Baytin, some 20 miles north of Jerusalem, biblical Bethel is now buried beneath the modern Arab village, yet in its vicinity are some visible remains well worth a visit.

History and Archaeology of Bethel

Bethel is first mentioned in Genesis 12:8, when Abraham pitched a tent and built and altar next to it. Later, in Genesis 28 the bible records Jacob falling asleep at Bethel, dreaming of a ladder reaching the heavens and thronged with angels. In the book of Judges (20:25) Bethel is described as a religious center, where the ark of the covenant was kept. Centuries later, after the death of Solomon, Jeroboam crowned himself over the northern tribes and set two religious centers for the worship of golden calves, one at Dan, and one in Bethel. 1 King 13 records a man prophesizing that this shrine will be destroyed one day by a king called Josiah. Indeed 2 Kings 23:15 records Josiah defiling and destroying Bethel’s place of idol worship.

Most scholars identify Bethel and Baytin, an Arab village some 20 miles north of Jerusalem. Excavations conducted at the site uncovered remains from the Canaanite and Israelite periods. 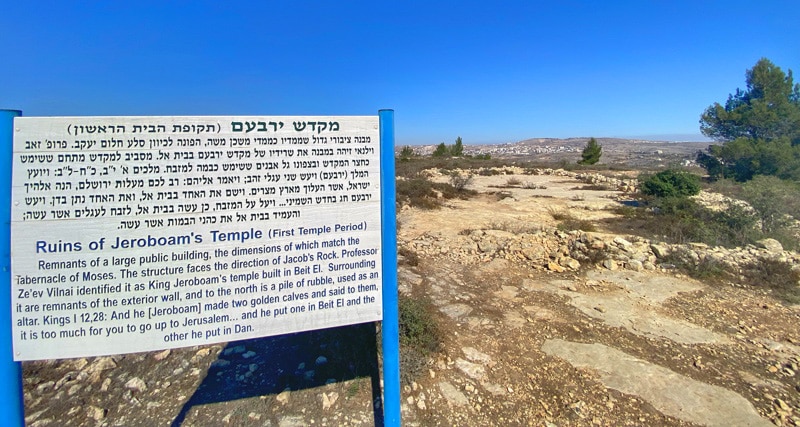 Today there are almost no visible remains of biblical Bethel at Baytin. However, at the summit of mount Artas, 1 mile north of Baytin, are some interesting finds. Facing north is a big stone platform framed by a stone wall forming a rectangular shape. By local tradition this was the place of Jeroboam’s temple. Next to it, a Muslim shrine (Maqam Sheikh Abdallah) is built over chapel from Crusaders times. By local tradition the chapel used to mark the site of Jacob’s dream. The site also provides one of the best panoramic views in all of Israel. The coastline, the Jordan valley, the mountains of Moab and even the Mount Hermon are visible from here.

A tour of Bethel can be combined in a day tour of Samaria.