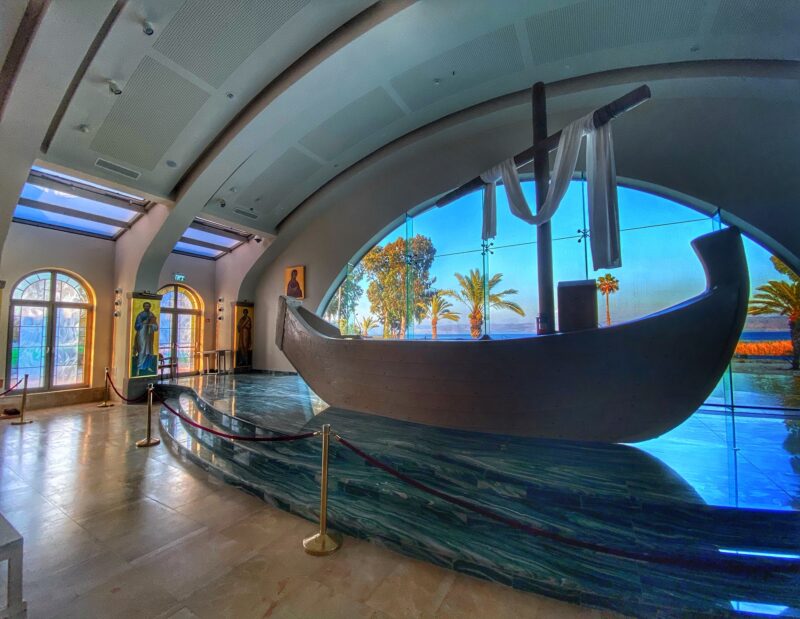 Duc in Altum (from Latin “put out into the deep”, Luke 5:4) is the name of Magdala center’s main church. It is one of the most striking churches in the Holy Land, commemorating Mary Magdelene, and inspiring all believers.

History of Duc in Altum Church

On the turn of the 21st century the ancient site of Magdala was developed in an unprecedented way. Known as the Magdala center, extensive archaeological excavations were carried out through the site, followed by the construction of a commercial center and a new pilgrims’ hotel (Magdala hotel). Near the waterfront a new modern church was built, setting a new benchmark for ecclesiastical architecture. The entry, called “The Women’s Atrium” is dedicated to all women followers of Jesus. Seven of the atrium’s pillars are engraved with the names of women mentioned in the Gospels. The eighth column is empty, devoted to all women who visit the church. Around the Atrium, 4 chapels are devoted to different events relating to Jesus and his ministry in the Galilee. The scenes are depicted in colorful detailed spectacular mosaic artwork. The main hall of the church is simply stunning. It is designed like an inverted boat. Facing east, the Sea of Galilee is visible through a glass wall. The raised apse is paved with green marble on which stands an altar shaped like a First century boat. With the infinity pool in the back, an effective illusion makes the altar-boat appear to be on the lake itself. Beneath the main hall, an Encounter Chapel is built around an ancient paved courtyard from 2,000 years ago. The courtyard may have been ancient Magdala’s main fish market, near its wharf. A hyper-realistic large size painting behind the chapel’s altar relates to Jesus’ cure of hemorrhaging woman (Mat. 9:20-22).

The church is open all days of the week. It can be accessed from the Magdala’s archaeological park or from the hotel. The church design is a masterpiece, possibly the most beautiful church in the Holy Land.

A visit to Magdala and Duc in Altum church can be combined with a guided day tour of the Galilee.