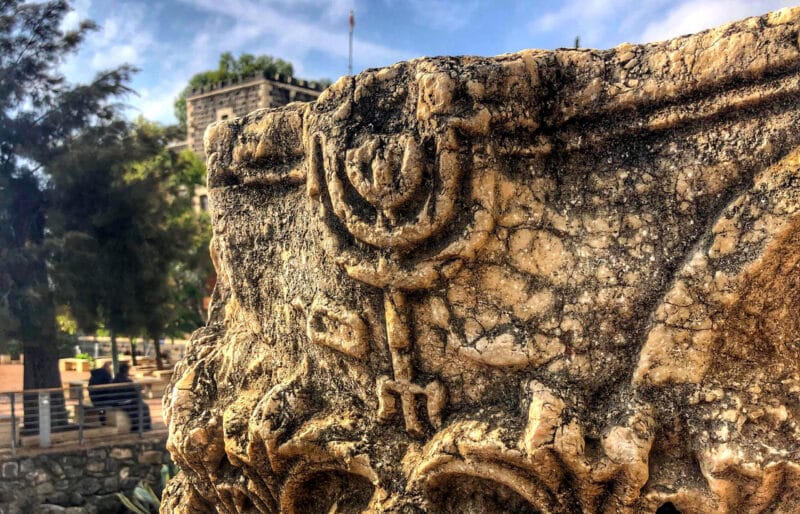 Located on the northwestern shore of the Sea of Galilee, Capernaum (from Hebrew: Kfar Nahum – Village of Nahum) is one of the most important sites in Christendom. Jesus lived in Capernaum for at least three years, in Capernaum he recruited his disciples, preformed miracles, and near Capernaum he delivered the “Sermon on the Mount“. Today, the site is visited on daily basis by thousands of pilgrims, from all around the world.

History and Archeology of Capernaum

Capernaum was settled in the time of the Hasmoneans. In the first century, after being rejected in Nazareth, his hometown, Jesus moved to Capernaum, and settled in it for at least three years. Preaching and preforming miracles, some in the local synagogue, In Capernaum Jesus laid the foundations of Christian faith. Jesus’ disciples and first followers probably congregated in the house-church (Domus Ecclesia) of Simon Peter and Andrew. In the Byzantine period (4th-7th century CE) the house was transformed into an octagonal church. The first century Synagogue next to it was also turned into a grand edifice. The village flourished until the 8th century CE. Under Arab rule Capernaum was gradually abandoned. After the Crusader period even the location of Capernaum was forgotten. Pilgrims visiting the Holy Land in the 15th-17th centuries said they visited Capernaum, but reported it was near Caesarea, on the Mediterranean coast. They were obviously misled.

In 1838, American Scholar Eduard Robinson was the first to suggest identifying ancient Capernaum at Tell Hum, a small Arab village on the northwestern shore of the Sea of Galilee, 3 miles of the Mouth of the Jordan River. Robinson noticed at the site “the prostrate ruins of an edifice which, for expense, labour and ornament, surpasses anything we have yet seen in Palestine”.  During a second visit he identified that building as a synagogue. In 1894, the Franciscan Custody of the Holy Land purchased the western part of the Tell Hum and fenced it. The eastern part became property of the Greek Orthodox Church in Jerusalem. In 1905, the Franciscans granted two German archaeologists, Kohl and Watzinger, a permit to excavate the ancient synagogue in their property. In the following years, the German scholars revealed the whole synagogue, as well as the nearby house of Peter and Andrew. In the following decades the site was further excavated by Franciscan archaeologists, and developed for visits of pilgrims and tourists.

Today, Capernaum is one of the most popular Christian Pilgrimage destinations in the Holy Land. Covering an area of 3 acres, the Roman-era village had an orthogonal design, with streets intersecting one another in straight angles. Its two focal points are the ancient synagogue, and an octagonal church, said to be built over the home of Peter, his mother in law, and Andrew.

Capernaum’s ancient synagogue is the most conspicuous structure in the site. In striking contrast to the village’s private homes, all built of black basalt stones, the synagogue consists almost entirely of white limestone blocks, imported from a distant quarry. Being so, it was labeled by the archaeologists as “The White Synagogue”. The synagogues’ walls and doorways were lavishly decorated with bas-reliefs. The plentiful decorations include floral and geometric designs as well as objects of ritual significance, such as the Menorah, and a portable temple.  The main hall inside the synagogue is rectangular. Three rows of columns held the ceiling and an upper gallery. Two of them bear inscriptions which praise ancient donors, while a third commemorates the reconstruction of the building by the Franciscans. To the east of the main hall is a colonnaded courtyard, perhaps a gathering area for the community, or for the village council.

Is This the Synagogue Jesus Knew?

Capernaum’s “White Synagogue” is grand, but it proved to date to the Byzantine period, centuries after Jesus’ time. In search of Capernaum’s first century synagogue, in the 1960s the Franciscan archaeologists dug probes beneath the white synagogue’s floor. These probes uncovered a floor of an earlier public building. Most scholars argue that these are the remains of the 1st century synagogue that Jesus knew. One of these probes is visible to this day. 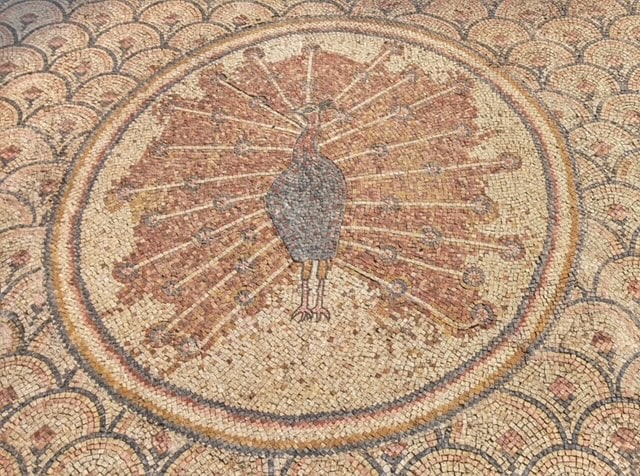 According to the Gospels, Peter and Andrew’s house was near the synagogue (Mark 1:29). Indeed, 80 feet south of the synagogue archaeologists uncovered a first century house. In the Byzantine Period a wall was constructed around it and then an octagonal church was built over it. The church’s floor was paved with colorful mosaic floors, whose center piece was a peacock, a symbol of immortality. The archaeologists concluded that this was the house of Peter and Andrew, which was converted to a house-church (Domus Ecclesia), perhaps already by the end of the first century CE. Later, in the Byzantine period a commemoration octagonal church was built above it. In 1982 a modern octagonal church was built above the site. It is suspended over the old church, and house, by large size pillars. Today, pilgrims can visit, and pray, in the modern church, which hovers above the antiquities. Furthermore, the church’s glass floor enables viewing and appreciating the ancient remains. 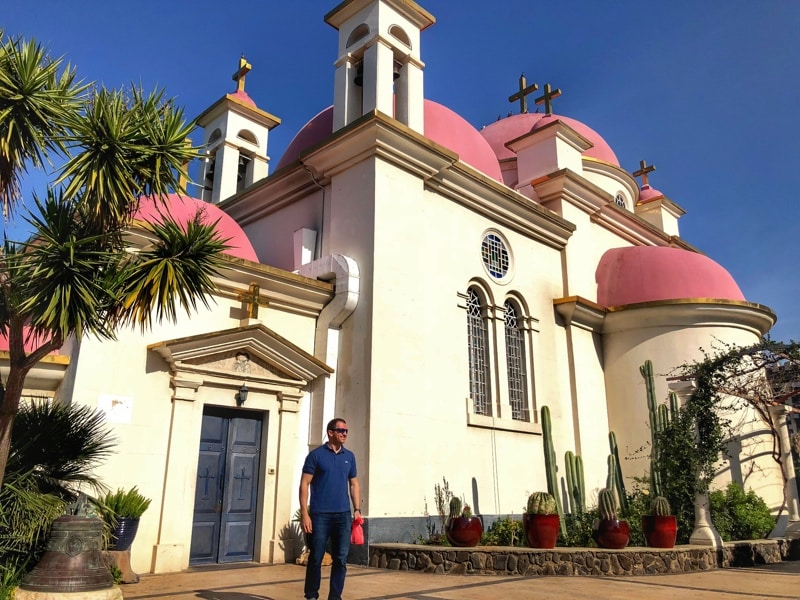 The eastern part of ancient Capernaum is under the custody of the Greek Orthodox Church in Jerusalem. In 1931 a traditional Greek-style church was erected at the site, commemorating the 12 disciples. The area around the church was excavated in 1979-1982 by an archaeologist who was formerly a Greek monk, Dr. Vasilius Tzaferis. Unfortunately, the discoveries made here are not maintained well, and almost none of the antiquities are visible. On the other hand, the modern church itself is worth a visit. Its interior was renovated in 2003, painted with colorful scenes in Byzantine style. Especially enchanting is the description of the judgment into after-life which covers the entire inner wall of the entrance.

Next Greek-Orthodox property, hidden under a jojoba tree, is a Mausoleum from Roman times. By local Christian tradition, it is the tomb of the Centurion who financed the construction of the synagogue of Capernaum (Luke :1-10). By Jewish Orthodox tradition it is an ancient tomb of the biblical prophet Nahum.

A tour of Capernaum can combined with a guided day tour of the Galilee.

Contact us to inquire more about a private tour to Capernaum: