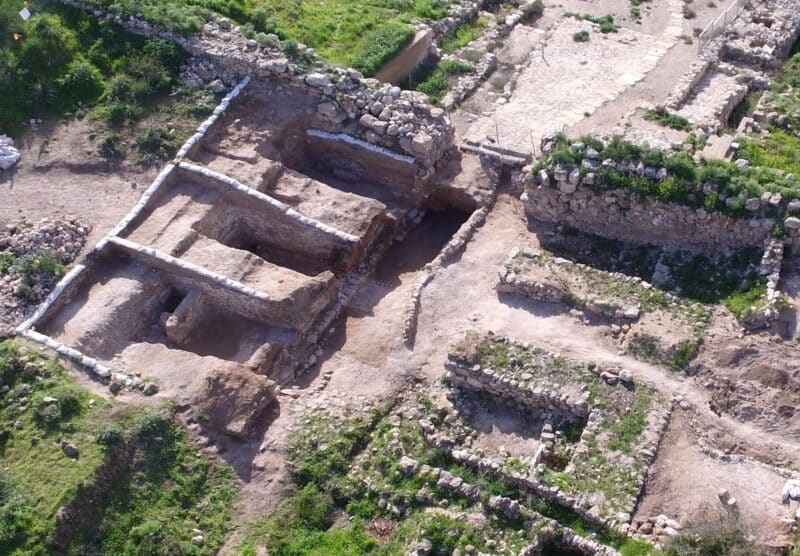 An aerial view of the gate of Lachish after the exposure of its Southern half. Photo by Guy Fitusi. Courtesy of the IAA.

The Bible can be graphic and blunt and times. Such is the case when it describes Jehus’ religious reforms in the city of Samaria , in which he turns a “House o Baal” into, well, a “House of Shit” – “and they brought out the pillar that was inthe house of Baal and burned it. And they demolished the pillar of Baal, and demolished the house of Baal, and made it a latrine to this day.” (II Kings 10:26-27). But is this just a literary phrase on behalf of the Biblical scribe, expressing his discuss from Ba’al worship, or is it a depiction of a real event? Samaria  was excavated intensively, by several expeditions, but no traces of a Biblical shrine, or a public latrine were found to date. Yet recently a certain verification of the graphic Biblical text was uncovered at a site 100 km south of Samaria – Tel Lachish.

Lachish was the second only to Jerusalem in the Judean Kingdom in Biblical Times. It was identified at “Tell ed-Duweir” in the Southern Shephelah, and was excavated mostly by J.L. starkey (until he was murdered by Arabs in 1938) and by D. Ussishkin on behalf of Tel-Aviv university in 1977-1994. Recently Y. Garfinkel of the Hebrew University resumed excavations at the site, but the recent significant discovery was actually made by Sa’ar Ganor on behalf of the Israel Antiquities Authority during excavations in the City’s main gate for tourism development. The previous expeditions uncovered the northern half of the gate, but the Southern side proved to contained a buried secret. In one of the gate’s cells an altar (or rather double altar) was uncovered! It was still in its original position, yet its horns were cut off, as if it was deliberately defiled, and so go out of use.

But the big suprtise was still waiting. Next to the altar, a complete toilet seat was found (!).

Microscopic analysis of the fill around the latrine did not track any traces of human waste, so the placement of the latrine may have been just a symbolic act, still its resemblance to Jehu’s acts in Samaria is striking. Abolishing and defiling the altar in Lachish’s gate was probably done by Hezekiah, King of Judea, who “..removed the high places and broke the pillars and cut down the Asherah.” (II Kings 18). Shortly After Hezekiah’s religious reforms the mighty forces of the Neo-Assyrian empire, led by Sennacherib, attacked conquered and razed all of Lachish to the ground, including the gate complex.

This dramatic event is only hinted in the Bible, but is depicted in a very graphic and detailed way in the “Lachish battle relief” found in the 19th century in ancient Nineveh (in today’s Iraq) and now on display at the British Museum in London. The relief presents many parts of ancient Lachish, including its gate. This discovery may have also solve the riddle of the purpose of about 80 bent bowls which were discovered in the past in the area of the gate. Perhaps they were used to burn incense at the altar.

It is still not clear why the altar has a rectangular shape, with an incision in the middle. Perhaps more than one deity was worshipped here? In  Tel Arad a complete Judean temple was found in TWO standing stones in its holy of holies, and altar facing each masebah. 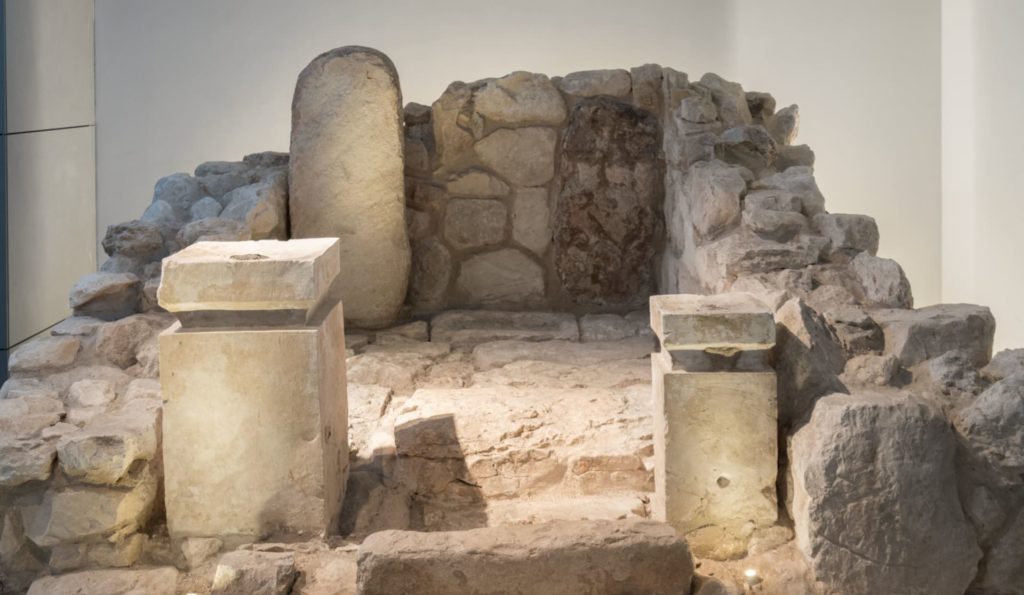 The “Holy of Holies” of the Biblical Temple in Tel Arad rebuilt and displayed at the Israel museum in Jerusalen. Photo by Laura Lachman. Courtesy of the Israel Museum and the Israel Antiquities Authority.

It seems that also in Arad two divinities were worshipped, but who could thay be? In Kuntilat Ajrud in the northern Sinai peninsula a Paleo Hebrew Inscription expressed the devotion to “Yahweh Teman (=of the south) and his Ashera“. Was Yahweh worshipped with a consort until the reforms of Hezekiah?? Archaeology may not answer this question satisfactorily, but it provide interesting evidence to this enigmatic topic.

Contact us for a special private tour of Lachish and other sites in the Shephelah.