On 18th of January 749 CE ‘Abed the merchant woke up for another day in Beisan, a major city in the northern Jordan valley. ‘Abed was doing well. He had a shop on the main street where he sold flax cloth. In the back of his store he had vats for dyeing the fabric to any color. The flax of Beisan was highly sought after. The edict of the Emperor Diocletian (298 CE) declared Beisan’s flax as the best in the Roman Empire(!). It was also the most expensive. About a century earlier, Beisan, where ‘Abed was born and raised, was conquered by the Muslim Arabs from the Christian Byzantines. The streets still bore some of the Roman-Byzantine architectural elements. The big bathhouse was still used, but the local theatre and temples had gone out of use long before, their stones partly re-used by the locals. Yet the market street was as busy as ever. The road followed the alignment of the Roman main street, but shops now extended into the pedestrian zone, making the market look more crowded and busy than ever. Aside flax, merchants offered local agricultural products and locally made pottery vessels, as well as imported jewelry and metalwork.

Two inscriptions made of glass mosaic stones adorned the entrance to the market street. Some of the stones were covered in golden leaves. Similar wall mosaics decorated the Dome of the Rock inJerusalem, the construction of which had just been completed.

The inscriptions were in honor of ‘Abd Alla the Khalif, and Ishaq bin Qabisa the governor, who renovated the market place and put up the inscriptions.

Beisan had a long and rich history. In Canaanite times it was a small fortified site on the top of the tell, the acropolis of the city. At that time, Beisan was called Beit-She’an ( Hebrew: “the house of Shean”). The Philistines held the site for a while and displayed on its walls the body of Saul after he was killed in battle at nearby Mt Gilboa (I Sam. 31:10).

In the Greco-Roman periods the city developed in the valley south of the tell. It was renamed “Nyse-Scythopolis”, associating its local religious cult with Nyse and the Scythians, figures related Dionysus. Scythopolis was a member of the Decapolis, an association of ten towns, in the time of Jesus, and he may have passed through the city. After conquering the city in 635 AD, the Muslims reverted to the Semitic name of the city, but with an Arabic slant – “Beisan”. In 749 CE Beisan was mostly Muslim, but there were still small Christian and Jewish communities in the city. But all the residents were about to face the same fate.

Around 9:30am on 18 January, the earth suddenly began to shake. For about 30 seconds the earth moved like a raft in stormy water. Fearful people ran screaming in all directions. Buildings fell, most in the same direction, to the north. Fire broke out in the olive oil stores. Some people were caught under the falling stones. Many were injured and some died as a result. The glorious city, with its long and rich history, fell into ruins, sealed by the debris until the 20th century CE. ‘Abed’s fate is unknown but his store was left with all its contents, including some gold coins inscribed in Arabic. 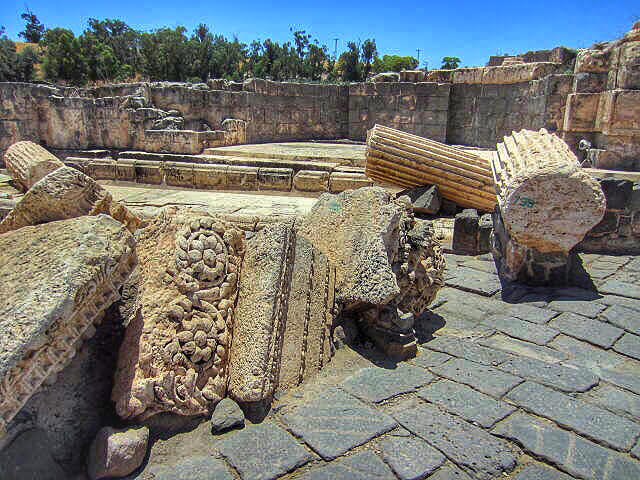 In 1986 the Ministry of Tourism of the State of Israel launched a 16-year excavation project at Beisan-Beit She’an. Directed by a joint expedition of the Hebrew University and the Israel Antiquities authority, the large scale excavations was also to include reconstruction of various buildings in the lower city, and on the tell, all to promote tourism to the site and the region.

As of 2005 the main street is fully exposed and visitors can stroll along it, imagining the merchandise that was once offered here. The theatre is also active again and summer concerts here are very popular. The western bathhouse complex is also developed for visits, and on the tell an Egyptian style palace has been reconstructed. The site is a pearl and receives growing crowds on annual basis.

Contact us for a private tour to Beit-Shean and other sites in its vicinity.