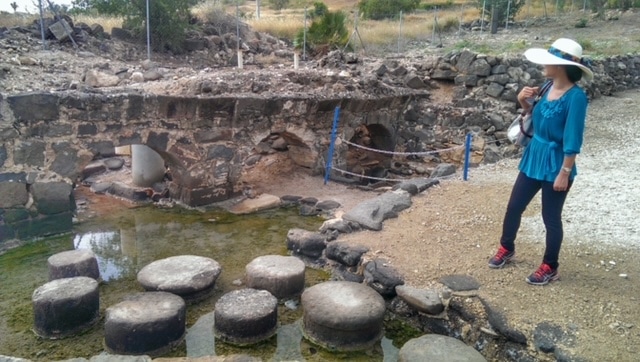 Hamat Tibeias is a southern suburb of Tiberias, known for its thermal springs both in both modern and ancient times. Next to the modern facility lie the remains of its bath house complex from antiquity. Surprisingly, it also includes a synagogue whose floor was decorated with zodiac and figurative art.

History and Archaeology of Hamat Tiberias

Hamat Tiberias may be at the location of the Canaanite city of Hammath Joshua 19:35), yet so far, no archaeological evidence was recovered from that period. The site was especially popular in the Roman and Byzantine periods, as its thermal water were believed to have curative powers. The Jewish Talmud referred to it several times, suggesting its water were steamed in the gates of Hell. So far only a small section of the Roman-era baths has been exposed, but in the 1960s an ancient synagogue was uncovered next to the bath house. Used for over 500 years, it was renovated several times. In one of it renovations an ornate mosaic floor was installed, whose main subject is a Zodiac with Helios in the middle. The appearance of a pagan sun-god in the synagogue’s floor continues to buzzle scholars to this day.

Hamat Tiberias is not the only site where figurative art, Zodiac, and Helios appear in the decoration of an ancient synagogue. Similar themes were recorded also in the ancient synagogues of Beth-Alpha, Sepphoris, Naaran, and more. They all seem to attest to a liberal attitude in Judaism in antiquity which is barely reflected in the Talmud. Nevertheless, the exact meaning of these symbols remains uncertain. One popular explanation, developed by Prof. Zeev Weiss, suggests that they symbolize God and his omnipotence.

Hamat Tiberias is a national park. It is open every day from 8:00 to 17:00, and has an entry fee. The Ottoman-era bath house near the entrance, Hamam Sulieman, was developed to a small museum presenting the history and archaeology of the site. Recently, an audio-visual presentation was installed in the ancient synagogue as well.

A visit to Hamat Tiberias can be combined with a guided day tour of the Galilee.

The ancient synagogue of Hamat Tiberias is a perfect place for a Bar or Bat-Mitzvah ceremony. Developed into a covered and air-conditioned visitor center, the site welcome Jewish families of all denominations to celebrate their child special day. The ceremony can be followed by an event in one of the hotels in Tiberias, and a private sail on the Sea of Galilee. In the evening the party can continue as a festive dinner at “Decks” restaurant, including live music, dancing, and fireworks from the lake. What a great way to celebrate a great day!

Contact us to inquire more about a private tour Hamat Tiberias: