Nestling at the fertile eastern end of the Jezreel valley, Beit She’an (spelled also ‘Beth Shean’) is a city with long and rich history, in an area known for its springs. It is also located on the junction on important trade routes, including a bridge over the Jordan river active to this day.

History and Archaeology of Beit-She’an

Inhabited since Neolithic times, Beit She’an was inhabited by the Canaanites, and was an administrative center of the Egyptian Pharaohs. The bible alludes to Beit She’an been controlled by the Philistines, and that on the walls of Beit She’an they hanged the bodies of Saul and his sons (I Sam. 31:10). Bei’t Shean is not mentioned by name in the New Testament, but it was a member of the ‘Decapolis’, a league of ten pagan cities which Jesus visited (cf. Matthew 4:25). Jesus may have visited Be’it Shean on his way to the baptism as well as on one of his pilgrimages to Jerusalem.

Beit-She’an, the Decapolis, and Jesus

Decapolis was a term used to describe a group of ten Pagan cities in the southern Levant that were politically and culturally affiliated and were supported by the Romans. Some of these cities exist to this day, and some have become archaeological sites. Six of these cities are today in Jordan (Gerasa, Gadara, Pella, Amman, Capitolias, and Raphana). Two are in Syria (Damascus and Canatha), and two in Israel (Beit-Shean and Hippos-Sussita, as well as the Baths of Gadara). The Gospels record Jesus visiting the cities of the Decapolis (e.g. Mark 7:31), but none of them mentioned by name. Jesus probably visited Beit-Shean (then called Nysa Scythopolis), as it is on the way from the Galilee to the Baptism site near Jericho, and to Jerusalem

Beit-She’an prospered in the Roman-Byzantine period, and it was then known by the name ‘Nysa-Scythopolis’. The city covered an area of 370 acres and especially famous for its flax fabrics. After the Muslim conquest the city declined, and it was severely damaged in the earthquake of 749 CE. However, parts of the city were inhabited also by the Crusaders and subsequent periods. Today, the modern city of Beit-She’an is spread around the ruins of the ancient site. Excavations at Beit-She’an began in the 1920s when an American archaeological expedition excavated its citadel. In the 1990s much of the Roman-Byzantine city was exposed, followed by touristic development. 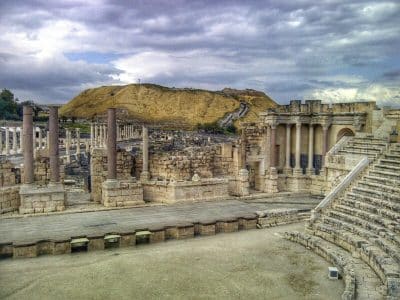 Today, ancient Beit-She’an is a national park, and a popular tour destination. The biblical period ruins are on top of a prominent tell, overlooking the Greek and Roman ruins in the valley. The most remarkable structures in the Roman city are a 5,000 seats theater and two giants bath houses next to it. The colonnaded street, paved with black basalt slabs, runs from the theatre to the base of the tell. The street was lined with shops, some operating as brothels and flanked by 20 feet wide footpaths. Several Temples stood at the end of the street, and close by was a nymphaeum and a Basilica. South of the city center the Romans erected a Hippodrome, which was later transformed to an amphitheater for gladiator shows. Centuries later, the Crusaders built a fort over the carceres of the Hippodrome, where they also ran a sugar plant.

A tour of Be’it Shean can be combined with in a day tour in the north.

If staying nearby for the night, it is highly recommended to book the audio visual night show at Beit-Shean –  ‘Leylot Shean‘.

Considered the fourth biggest audio-light show in the world, the spectacle begins with a 10 minutes presentation on the back of the ancient theatre, and followed by various effects while strolling among the antiquities of the site.

Contact us to inquire more about a private tour to Beit-Shean: