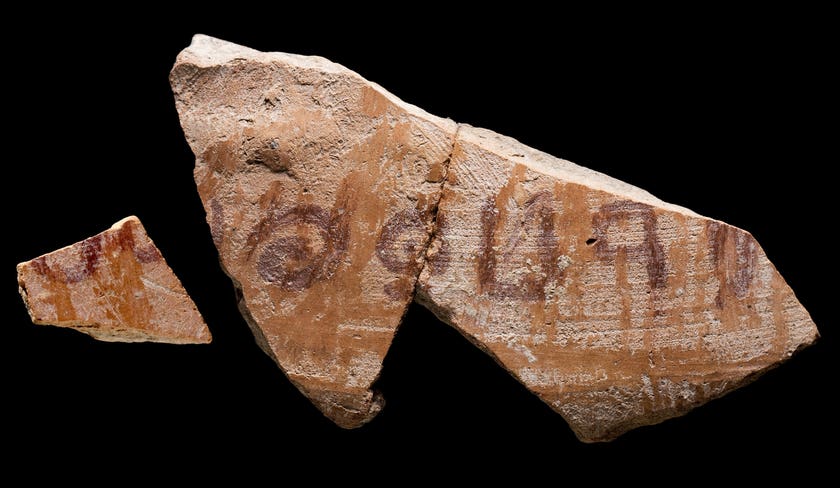 In recent excavations conducted in kh. E-Rai, in the southern Shephelah, the archaeological team made an unusual and rare discovery.

The site is excavated since 2015 by a joint Israeli-Australian expedition, and they believe the site should be identified with Biblical Ziklag. According to I Samuel 27 Ziklag was given by Achish king of Gath to David, and was used as his base. From Ziklag David raided on neighboring sites, and in Ziklag David lamented upon hearing on Saul’s death (II Samuel 1).

Not all scholars agree with Garfinkel that E-Rai is indeed Biblical Ziklag, especially because the book of Joshua (19:1-5) suggests it should be further south.

But Garfinkel did discover in E-Rai layers that match the period of David and the Philistines. However inscribed finds from such early periods are extremely rare, as most of the Israelites were not yet literate.

Indeed, the inscribed pot is a rare discovery, and the shape of the letters suggest that the scribe was not skilled in writing. But the text is legible enough to read it, and the single word is a name –  “Jerubaal” (“ירובעל”). “Jerubaal” is known from the book of Judges. It was the second name of the military leader Gideon, who thought against the Midianites. Although the bible doesn’t mention Gideon living or staying in Ziklag, the find proves that this name was indeed in use around the 11th century BCE, the time of the book of Judges.

This find is similar to the discovery Garfinkel made in 2012 in another early Iron age site – Khirbet Qeyiafa. Located 20 miles north east of Kh. E-Rai, At Qeiyafa Garfinkel also found an inscription in early paleo-Hebrew script, mentioning the name “Eshbaal”  (“אשבעל”).  Eshbaal was the name of king Saul’s son (II Chr. 8:33), which again dates to the 11th century BCE.

Both the “Jerubaal” and “Eshbaal” inscriptions provide significant support to validate the Biblical narratives recorded in the books of Judges and Samuel. This is in contrary to the current trend among many Biblical scholars to disqualify the bible as a reliable historical source, especially for the books of Joshua, Judges, and Samuel.

See also my interview on “The Watchman” show, commenting on the new discovery –