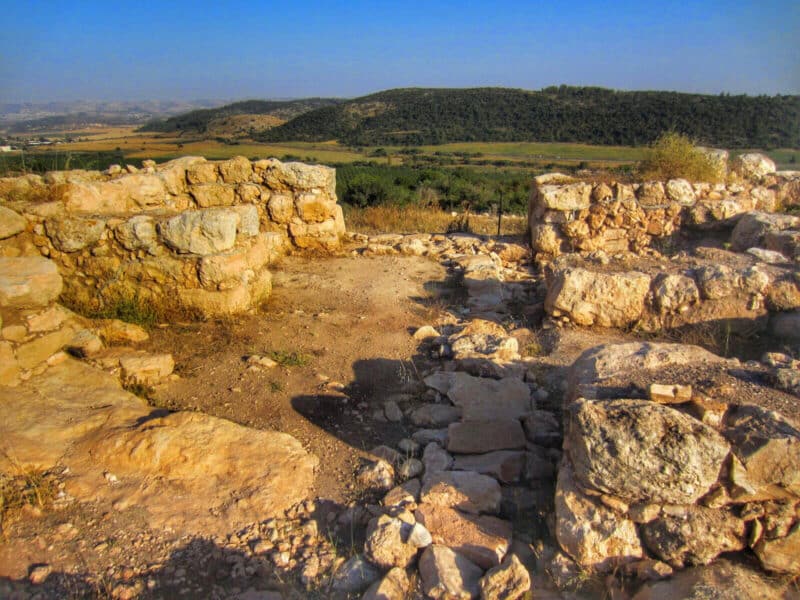 Perched on a hill in the heart of the Judean Foothills (The Shephelah), Khirbet Qeiyafa is a small yet significant site for the study of Biblical Archaeology.

History and Archaeology of Khirbet Qeiyafa

Khirbet Qeyiafa is located on a hill north of the Ellah valley, in between Azekah and Socho. This is a strategical area in between Judean and Philistine lands. Being so, it is no surprise that the Battle between David and Goliath took place in this valley (1 Samuel 17).  Qeiyafa was excavated between 2007 to 2013 by an archaeological expedition from the Hebrew University in Jerusalem. The excavations unearthed a round fortress covering the size of 6 acres that dates to the 10th century BCE. This is the first and only discovery of a clear fortified site from this period, which is attributed to the time of David and Solomon’s kingdom. Having two gates, some scholars suggested to identify the site with “Sha’araim” which means in Hebrew “two gates”. “Sha’araim” is mentioned in 1 Samuel 17:52 and Joshua 15:36, and in both cases it is mentioned near Azekah. Other scholars suggested to identify the site with ‘Aditaim, Azekah, Gov, Netaim, Efes Damim, or Ma’agela.  Either way most agree that the site provides a significant testimony to the existence of a monarchy in the time of David and Solomon. The site yielded a wealth of finds, including clay pots of various types, metal weapons, 2 clay models of shrine, other clay cultic objects, and two inscribed pottery shards (ostracae) written in early paleo-Hebrew. No less important is the lack of pig bones, which indicates the dwellers could not have been Philistines or Canaanites.

In 2016 the Bible Lands Museum in Jerusalem prepared a special exhibition of the site. See here a video presentation of this exhibition, narrated by ‘Danny the Digger’.

The site is approached by a dirt road from road 38, and is open year-round, free of charge.

A tour to Khirbet Qeiyafa can be combined in a guided day tour in the Judean Foothills (the Shephelah).

Contact us to inquire more about a private tour to Khirbet Qeiyafa: