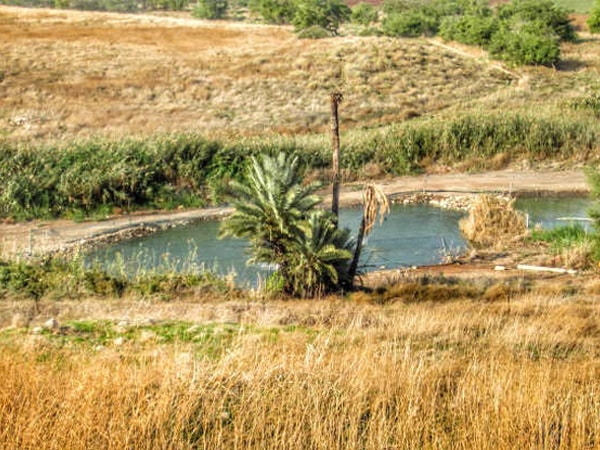 ‘Aenon near Salim’ is a site mentioned only once in the New Testament: “Now John also was baptizing at Aenon near Salim, because there was plenty of water, and people were coming and being baptized” (John 3:23). This place-name is not mentioned anywhere else in the New Testament, nor in any other historical source. Being so, its location is uncertain. Byzantine period sources describe ‘Aenon near Salim’ as being at a site south of Beit-Shean. Indeed, 6 miles south of Beth-Shean is a set of springs next to a mound called Tel Shalem.

In the 1970’s a tourist found, by chance, a bronze sculpture of a Roman emperor at Tel Shalem. In 2019 excavations around the mound uncovered remains of a Roman military camp. These are interesting finds, but they do not relate to the reference in the Gospel of John. There is a site near Tel Shalem called Khisas al Dayr. Dayr in Arabic means monastery, suggesting a monastery existed at this site in ancient times. Yet, to this day the site has not been excavated, nor has any of the springs around it. This rarely visited and forgotten place is perhaps the last site mentioned in the New Testament that has never been excavated.  Yet, the Gospel of John provides a clear testimony that John the Baptists was active at this site, baptizing people and calling to prepare for Christ.

Contact us to inquire more about a private tour to Aenon Near Salim: