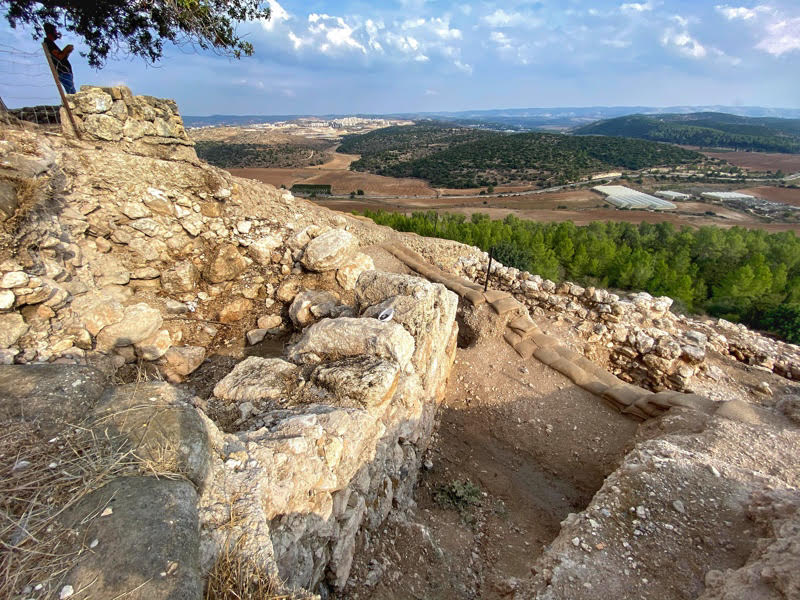 Azekah was a major city in the Judean hills (the Shephelah) both in Canaanite Israelite times. Identified at Tell Zakariah,  miles south of Beth Shemesh, Azekah is a great spot to review the history of the region, and especially the story of the Battle of David and Goliath

History and Archaeology of Azekah

Azekah is mentioned only six times in the Bible, yet it played a major role the history of the Holy Land. In the battle between David and Goliath Azekah was probably a military camp of the Philistines (I Sam. 17:1-4). Centuries later, Sennacharib boasted on conquering Azekah, although in his words it was like and “eagle’s nest…with towers that project to the sky like swords.”. Later, prophet Jeremiah describes Azekah as one of the last towns to be conquered by the Babylonians (Jeremiah 34:6-7). A letter found in nearby Lachish probably records their conquest of Azekah. Identified in the early 20th century, the whole site was excavated by Bliss and Macalister. However, working under Ottoman law, they had to cover the site at the end of their research. Since 2012 a joint expedition of several universities (The Lautenschläger Azekah Expedition) is uncovering the site again, with modern excavations techniques (radiocarbon, residue analysis, zoo archaeology studies and more). Among others, these excavations proved the site was also inhabited in the Hellenistic and Roman periods.

Azekah is on one of the highest hills in the Shephelah, within Britiannia park. A paved road leads almost to its top. As of 2020 the renewed excavations have uncovered architectural remains in 12 areas across the site, including possible remains of the Assyrian assault ramp. The lookout at its top provide stunning panoramas of the Jerusalem mountains, the Shephelah, and the coastal plain.

A tour of Azekah can be combined in a guided day tour in the Judean hills and the southern coastal plain of Israel.

Contact us to inquire more about a private tour to Azekah: