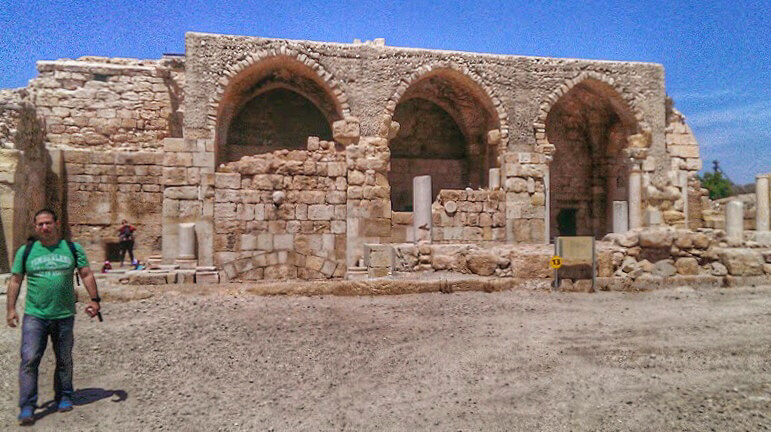 Beit Guvrin (From Aramaic: “House of Men”) is the Aramaic name of an important city that thrived in Roman to Crusaders times in the southern Judean Foothills (the Shephelah). Today, combined with Maresha, it is a national park.

Aside Lachish, the main city in the southern Shephelah in Biblical times was Maresha. Yet after its destruction in the 1st century BCE by the Parthians, a new city was established in the valley at its northern end, called “Beit Gavrei” or “Beit Guvrin”. It was apparently a Jewish regional center and so was destroyed by the Romans the Great Jewish Revolt (66-70 CE). Later, the Romans re-founded Beit Guvrin as a Roman city. They named it Eleutheropolis (From Greek: “City of the free”) and established an amphitheater and a big bath house complex in it. Despite its pagan nature, the Talmud indicates Jews continued to live in the city also in later periods, and some were even gladiators. Beit Guvrin was conquered by the Muslims in the 7th century, and its name was reverted to “Beit Jibrin”. Centuries later, Beit Guvrin was conquered by the Crusaders. They Named it “Jiblin”, fortified it, and added a big church in its center. In 1244 it fell again to the hands of the Muslims. They reversed its name and turned part of the church into a mosque. In 1948 Beit Guvrin became under Israeli control, and a year later a kibbutz by the same name was established next to the archaeological site. In 1981 kibbutz members tracked arched passages of the city’s Roman Amphitheatre. The structure was completely unearthed by archaeologists, as well as the adjacent bath house. In 2014 the site was recognized as a World Heritage Site by UNESCO.

Beit Guvrin is national park, open every day from 8:00 to 17:00. Its amphitheater is the best preserved of its type in the Holy Land, yet most of the city is still waiting to be uncovered.

A tour of Beit Guvrin can be combined in a guided day tour in the Judean Foothills (the Shephelah).