Deir Hajla (Arabic: Monastery of the Partridges), is the Arabic name for the site of the Monastery of Saint Gerasimos,  an monastic complex in the plains of Jericho, near the Jesus’ baptism site.

History of the Monastery of Saint Gerasimos 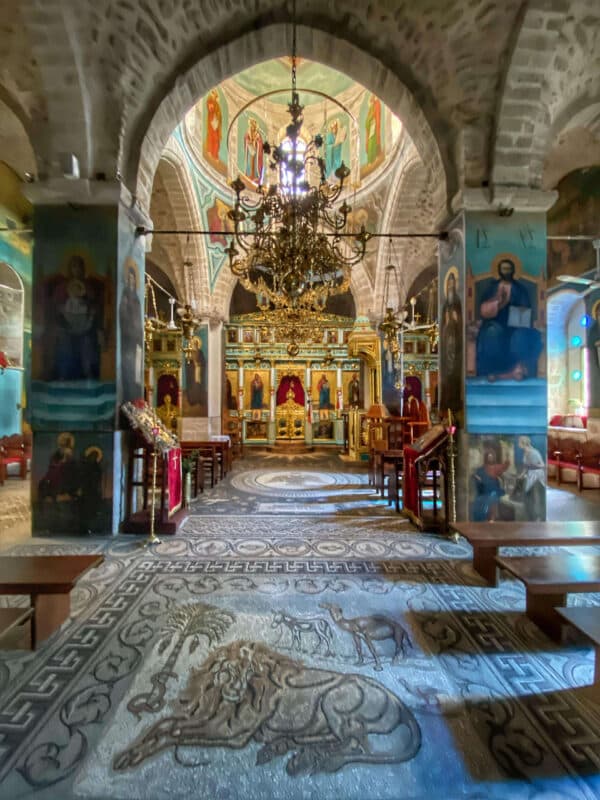 Acknowledging Christianity as a legitimate religion, in 313 CE emperor Constantine brought a fundamental change to the Roman Empire, and Christianity. This change would especially impact the Holy Land. The local population gradually embraced the Christian faith, and Christian pilgrims were now traversing through the Land of Israel, eager to venerate sites relating to figures and events mentioned in the holy scriptures. Some even settled at these sites. In 455 CE Gerasimos (spelled also “Gerasimus”) was the first to settle in the area of Jesus’ baptism site (Qasr el-Yahud), east of Jericho. He first lived as a hermit, in a cave, and later a monastery complex was built nearby.

The Monastery flourished up to the 7th century CE. It was rampaged by the Persians in 614 CE, who massacred its monks. The site was built and destroyed several times in the following centuries. In the late 19th century the Greek-Orthodox church rebuilt the site, providing a refreshing stop for pilgrims on their way to the baptism site. They maintain the site to this day.

Gerasimos and the Lion

Over the years different traditions developed around the figure of Gerasimos. One such tradition asserts that when Gerasimos lived in isolation in a cave, he cured a wounded lion. In return, the lion protected him, and later also rescued his donkey from thieves. Being so, in local Christian art Gerasimos is always depicted with a reclining lion next to him, and sometimes also his donkey.

Touring the Monastery of Saint Gerasimos

Today Gerasimos monastery is maintained by a single Greek-Orthodox monk, Abuna-Christo. By local tradition, the first floor is where Joseph, Mary and Jesus as an infant took shelter while fleeing from King Herod, on their way to Egypt. The main church, on the second floor, is decorated with mosaics and frescoes. Some depict monks that led the monastic movement in this region in the Byzantine Period. Both floors also present, in cabinets, bones of monks massacred in the Persian invasion to Holy Land in 614 CE. Aside the café and souvenir shop, the monastery also operates a unique mosaic workshop. It offers both secular, Christian and Jewish themed artworks. This mosaic workshop was also responsible for the creation of giant size mosaic wall depicting the Holy Land.  It is a brilliant artwork that dialogues with the 1,600-year-old mosaic map of the Holy Land found in Madaba, Jordan. It is on display next to the monastery’s parking lot, and is should not be missed!

A dirt road heading half a mile east of the monastery leads to the Laura of Gerasimus, the caves where Gerasimos and his early followers dwelt.

Contact us to inquire more about a private tour to Deir Hajla Monastery: