Domus Galilaeae (from Latin: Home of Galilee), is stunning modern Catholic complex located on a hilltop above Mount of Beatitudes overlooking the Sea of Galilee. It operates as a venue for Christian seminars and conventions, run by the Neocatechumenal Way. 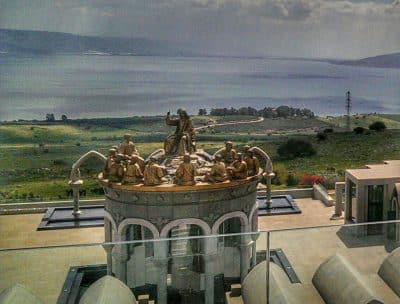 Domus Galilaeae was envisioned by the Pope Paul VI in the 1980s. He wished to establish in the Holy Land a center where Catholic students would spend a period of studies that focus on the Jewish roots of Christianity before ordained. The construction of the complex began in January 1999, and it was completed within less then two years. Domus Galilaeae was inaugurated by the Pope John Paul II during his Millennium visit to Israel. Planned by a team of architects, the campus’ general modern design embeds various quotes from ecclesiastical architecture. Its main halls are a grand entry, a sanctuary, a cloistered courtyard, a library, a church and an auditorium facing the Sea of Galilee.

The institution offers free 1.5 hour tour of its campus, whose congregation halls and library are truly amazing. The balcony also offers stunning panoramas of the Sea of Galilee in the back of a big artwork presenting Jesus preaching to the apostles.

A visit to the site can be combined with a guided day tour of the Galilee.