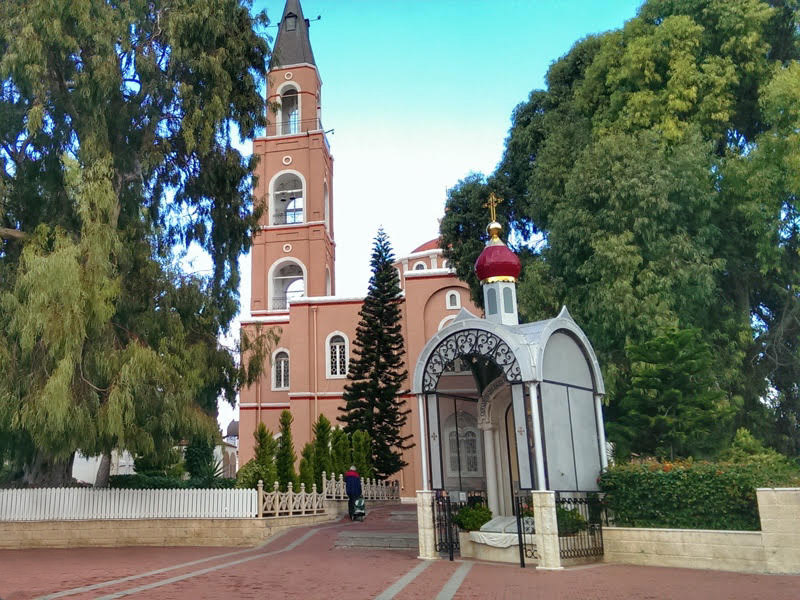 Located in Ganei Hatikva gardens, in the southern part of Tel-Aviv, the Russian Orthodox church and monastery near Jaffa are a 19th century establishment named after Saint Peter and Saint Tabitha. The site commemorates the raising of Tabitha from the dead by Peter, which took place in Jaffa:

“36 In Joppa there was a disciple named Tabitha (in Greek her name is Dorcas); she was always doing good and helping the poor. 37 About that time she became sick and died, and her body was washed and placed in an upstairs room. 38 Lydda was near Joppa; so when the disciples heard that Peter was in Lydda, they sent two men to him and urged him, “Please come at once!” 39 Peter went with them, and when he arrived he was taken upstairs to the room. All the widows stood around him, crying and showing him the robes and other clothing that Dorcas had made while she was still with them. 40 Peter sent them all out of the room; then he got down on his knees and prayed. Turning toward the dead woman, he said, “Tabitha, get up.” She opened her eyes, and seeing Peter she sat up. 41 He took her by the hand and helped her to her feet. Then he called for the believers, especially the widows, and presented her to them alive. 42 This became known all over Joppa, and many people believed in the Lord. 43 Peter stayed in Joppa for some time with a tanner named Simon. (Acts 9:36-43).

The main church, completed in 1894, has a typical Eastern Orthodox design. Its ornate interior décor presents a variety of saints in traditional style. However, the main attraction for Christian pilgrims is burial cave in the church’s compound. By local tradition, it is the tomb of Saint Tabitha, which Peter raised from the dead in Jaffa.

Touring the Church and the Cave

Visiting the site requires careful planning, as it is open only for a few hours, on Friday, Saturday and Sunday. But it is well worth the effort. This hidden gem is barely noticed, even by locals. Joining Russian pilgrim groups as they whisper prayers and light candles in the church, transforms you to the realm of Christian eastern orthodoxy, but within a district of Tel-Aviv.

A visit to the site can be combined with a guided day tour of Jaffa and Tel-Aviv.

Contact us to inquire more about a private tour to Saint Tabitha Church: