Home  >  Places to visit in Jerusalem   >  The Tomb of Jesus

The Tomb of Jesus 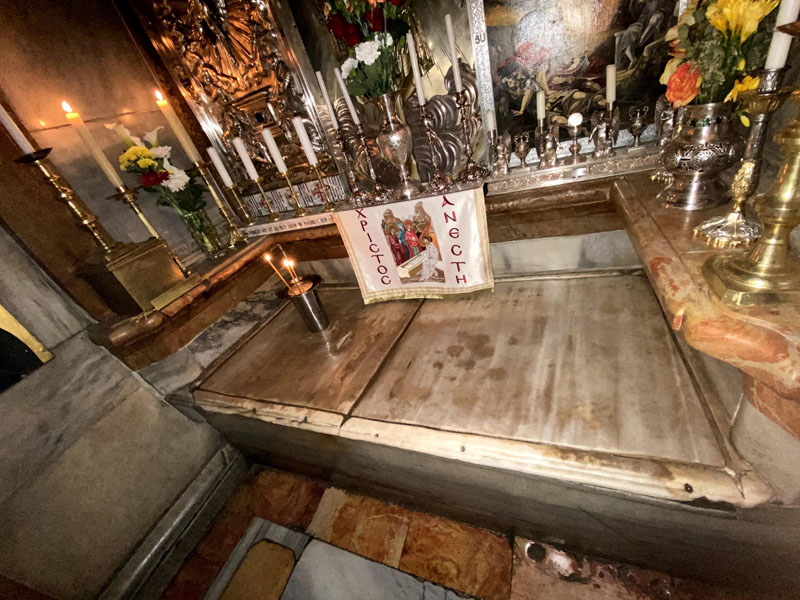 The Tomb of Jesus his perhaps the most significant site in Christendom. It marks the place where Jesus was buried after his crucifixion, and his resurrection two days later.

Visiting the tomb is the culmination of Christian pilgrimage to the Holy Land for millions and is one of the most important moments in their lives.

History of the Tomb of Jesus

The New Testament provide minimal information about the tomb and its location. Once the Roman soldiers acknowledge the death of Jesus, his body was taken off the cross. It was anointed, covered with shrouds, and placed in a burial cave. The Gospels also records a stone corking the entry.

The Gospels seem to indicate the tomb was near the hill of Jesus’ crucifixion (the Golgotha), and that both were in a garden, just outside the city.  In the early 4th century CE both the hill of crucifixion and the tomb were recognized, and a large church complex was built over them. It is known as the Church of the Holy Sepulchre. The surface around the burial cave was removed and a small shrine (aedicule) was built over it. A large size domed hall was formed around the shrine as well, for processions. In the 12th century the hall was renovated by the Crusaders, and again after a big conflagration in 1808.

Shape of the Tomb of Jesus

The Burial cave consists of two rooms. The inner room has a ledge on the right side, big enough to put a corpse over it. It is believed to be spot where the body of Jesus was laid. Today the ledge is covered by marble slabs, yet during renovations in 2018 the original bedrock was exposed. This discovery was international headlines, proving the Tomb of Jesus is indeed a burial chamber carved in the bed rock.

Visiting the Tomb of Jesus

The Tomb of Jesus is maintained by the Greek-Orthodox church. During daytime, and especially on Christian holidays, the cue to get into the tomb can take an hour or more. In certain situations, a tour guide might help to avoid the cue, and combine it well in a tour of the Church, and other highlights of Jerusalem’s old city.