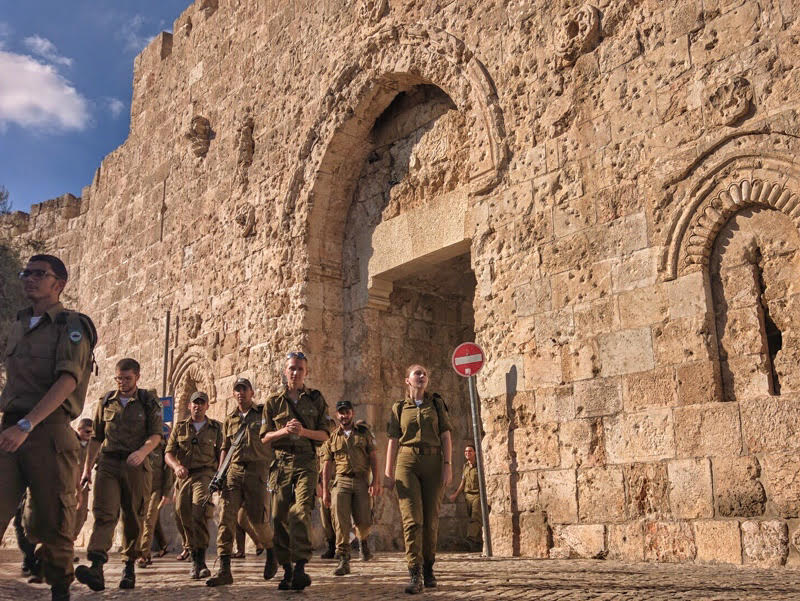 Zion Gate is located at the southern end of the Old City of Jerusalem. It is one of the gates set by the Ottomans when they re-erected the City’s walls, in the early 16th Century. The gate has a typical L-Shape, designed to slow down oncoming attackers. Above the gate a projecting balcony (Mashikuli) enabled dropping boiling oil, snakes, on excrement on potential invaders. Up to the 19th century the gate was closed every night, by heavy metal doors. In addition to its protective design, the gate was also decorated with various stone ornamentations. The gate also bears an Arab inscription glorifying Suleiman the Magnificent, the Ottoman Sultan who ordered and sponsored the re-fortification of Jerusalem. In May 1948 Palmach forces managed to reach the Jewish quarter by blowing up part of the wall next to the gate. Unfortunately, later they retreated, and the Jewish Quarter was evacuated. The Jordanian occupied the Jewish Quarter and the old City until 1967. To this day the front of the gate is battered by bullet holes from these battles. A white stone plaque in the gate records the battles here in 1948, and the reclaiming of the gate by during the Six-Day War, in 1967.

Zion gate is open for pedestrians and is even used by cars to exit the old City. Its named derives from the fact that it connects to Mount Zion, which  holds several significant Jewish and Christian holy sites.

It is also possible to walk on top of the gate, if hiking along the Ramparts walk.

A tour of Zion Gate can commbined with a guided day tour of Jerusalem.