The Quest for Ancient Modi’in 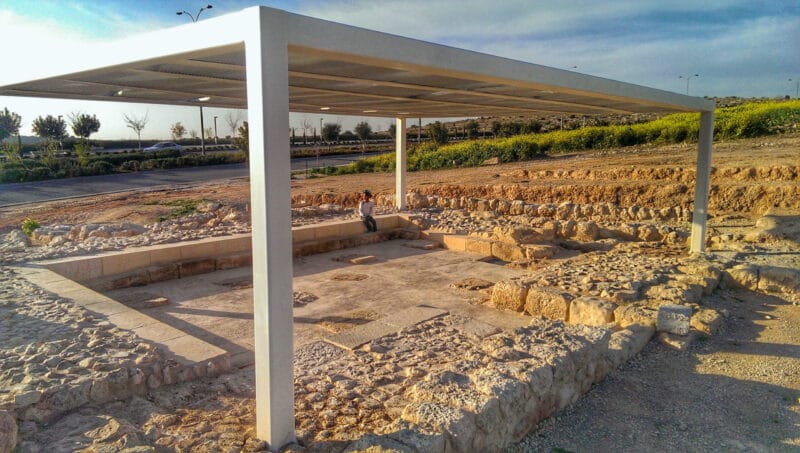 The site where many believe that the Maccabees are buried is marked by a very clear official state sign on the road leading to the modern city of Modi’in. Yet these tombs were made 600 years after the days of the Maccabees, and do not match the descriptions of the tombs of the Maccabean kings by contemporary historical sources. One of the main reasons for this mistake is the Arabic name of the site – “Qubur el-Yahood” (“Tombs of the Jews”), and the name of the nearby Arab village, “el-Midieh”. Many scholars believed it preserved the ancient name of the site – Modi’in. But the village of “el-Midieh” was never excavated properly. It was surveyed in the 19th century and again after the Six-Day War in 1967. These surveys traced various antiquities, but only a few of them could be attributed to the days of the Maccabees. Another problem is that the book of the Maccabees describes the tomb as a magnificent sepulcher, adorned by seven pyramids and reliefs which depict maritime scenes. According to one source, the sepulcher “can be seen from the [Mediterranean] sea”. From “Qubur el-Yahood” one can indeed view the sea, but the remains at the site include no pyramids or imposing ornamentation.

Locating ancient Modi’in could aid in locating the tomb of the Maccabees, and vice versa. But where are they? In the late 20th century the state of Israel decided on the founding of a new city by the name “Modi’in”, in areas south of “el-Midieh”. During the development of this area many archaeological surveys and salvage excavations were carried out by the Israel Antiquities Authority. Surveys at the hill of “Khirbet Titurah” (“the ruins of Titurah”) found evidence of a large village at that site from the days of the Maccabees, as well as from the Byzantine and Crusader periods. Some argue that ancient Modi’in is at this site, yet until the hill is properly excavated this possibility remains unproven.

In 2001 salvage excavations on the side of the road from Modi’in to Latrun junction (today’s Buchman neighborhood, 100 metres from my house) revealed another village from the days of the Maccabees, including a synagogue building. The Arabic name of this site, “Umm el-Umdan”, may even preserve the ancient name of the site – Modi’in. This site got a lot of public attention when it was discovered, yet the finds are of a very small village, and the Arabic name of the site is more likely derived from the pillars of the synagogue, which were always visible (“Umm el-Umdan” literally means “the mother of pillars”). Moreover no remains of a sepulcher were found at the site, or nearby.

So Where is Ancient Modi’in?

So where is ancient Modi’in? I believe there never was a real city by that name. The fact is that the Book of the Maccabees never calls the home of the Maccabees“Modi’in” but rather “Modi’im” – with a definite plural ending. I believe this means that Modi’in was really a cluster of agricultural farms, with no clear urban centre. These villages were scattered in the area between “Umm el Umdan” in the south, “Khirbet Titurah” and “el-Midieh” in the north. They had one synagogue at “Umm el-Umdan”, and perhaps more synagogues are waiting to be discovered at “Khirbet Titurah” and under the Arab village of “el-Midieh”.

And what about the royal sepulcher of the Maccabean kings? It too remains an unsolved mystery. The seven pyramids of Modi’in are still waiting to be discovered.

The Maccabees were a Jewish national liberation movement that fought for and won independence from Antiochus IV Epiphanes of the Hellenistic Seleucid dynasty. They established Jewish independence in the Land of Israel for about one hundred years, from 164 BC to 63 BC.

Ancient Modi’in was the place of origin of the Maccabees and where the Maccabean revolt against the Greeks started.

Hanukkah is an eight-day Jewish holiday commemorating the rededication of the Second Temple in Jerusalem at the time of the Maccabean Revolt. Hanukkah is observed for eight nights, starting on the 25th day of Kislev according to the Hebrew calendar, and may occur from late November to late December on the Gregorian calendar. The festival is observed by the kindling of the lights of a special candelabrum called Hanukiah (pictured left).