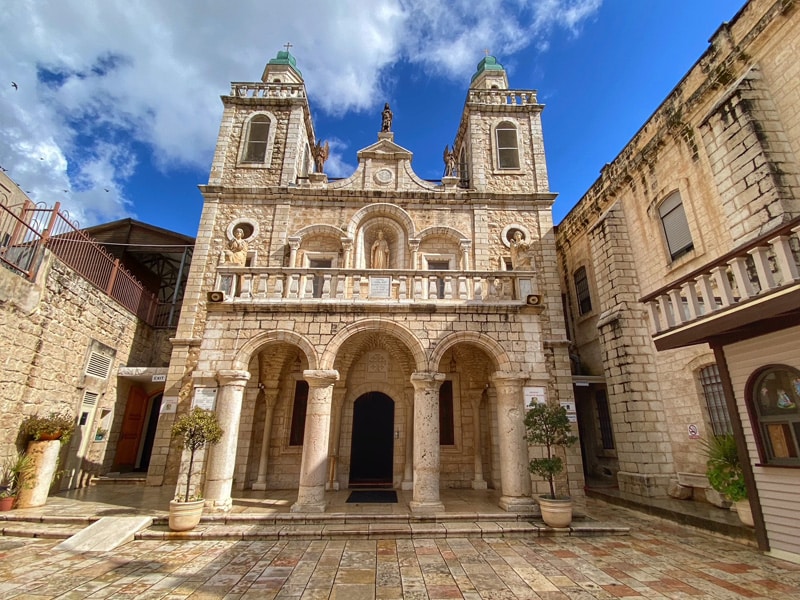 Cana is an Arab village nestled in the mountains the lower Galilee. By Christian tradition it is the site where Jesus turned water into wine and healed a person. Cana is also documented as the hometown of one of Jesus’ Disciples. Being so, Cana is a popular pilgrimage destination for Christian tour groups.

Cana in the New Testament

According to the Gospel of John, the first recorded miracle of Jesus took place in Cana in the Galilee (John 2:11). Jesus, his mother and the disciples attended a wedding, but the wine was all gone before the celebrations concluded. To the amazement of both host and guests, Jesus made water, stored in six stone jars, into wine. Jesus performed another miracle at Cana, when he healed the son of a nobleman from the town of Capernaum (John 4:46-54). Cana was also the hometown of one of the disciples –  Nathanael (also known as Bartholomew) (John 21:2). Most of the scholars identify Cana at Kafr Cana, an Arab village 6 km north east of Nazareth. This site is from the 5th century CE and on, and had a church built in it. After the Muslim conquest it turned into a mosque, but in 1879 the Catholic church purchased the mosque, and turned it back into a church. During the construction of the new church they conducted excavations. To their surprise, they found remains of an ancient synagogue buried beneath the church, dating to the 5rd Century CE. Was this synagogue built over a 1st century synagogue? Did a wedding take place in the 1st century synagogue? Is this where Jesus performed the miracle of turning water into wine? Although there is no proof of that, it remains a popular belief.

Is Cana really in Kafr Cana?

Although the name Cana is preserved to this day in the name of the Arab Village of Cana near Nazareth, some argue Cana could be in another location, Kh. Cana, a mound 13 km north of Nazareth. Reviewing itineraries of Pilgrims from the Crusaders period it seems indeed that they visited kh. Cana, not Kafr Cana. In 1998-2001 E. Edwards from University of Puget Sound excavated the site of Kh. Cana. His main discovery is a cave that he argues is related to the veneration of the wedding miracle at the site. Though the cave bears certain anomalies, weather it was really related to the veneration of the wedding miracle of Cana remains unclear. Another new candidate for Ancient Cana, is the western hill of Kafr Cana. Salvage excavations conducted at that site in 2004 exposed evidence for a 1st century Jewish village. Y. Alexander, head of the excavation, argues this site could be ancient Cana, though it is possible that this was part of ancient Cana, together with Kafr Cana itself.

Touring the Churches in Cana

The Modern Catholic Church in Kafr Cana is modeled in a European style. Its shape echoes a cathedral in Zalburg, the hometown of Fr. Aegidius Geissler, its first priest. The church is also symmetrical in design, to echo the symmetry in marriage. The belief that this church is built over the spot where the New Testament recorded a wedding attracts many pilgrim groups. Some coupled will even perform a ceremony of ‘renewal of the vows’ in the church. In the 1990’s, excavations under the apse of the church unearthed a monolithic stone basin for holding liquids. Many pilgrims believe this could be one of the stone jars that held the water Jesus turned into wine. The Jar seems to have been used last as part of an olive press, but perhaps it was originally formed to hold water in purity by Jewish law. 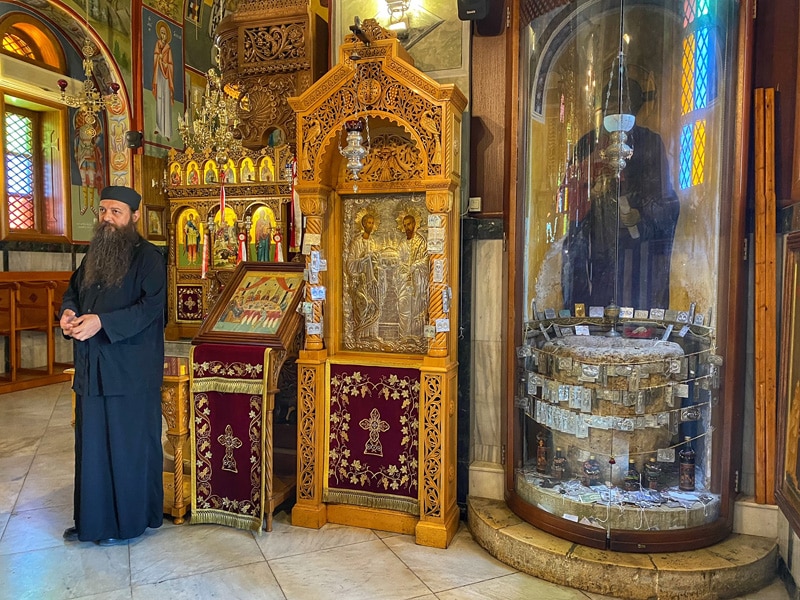 On the opposite side of the street, a Greek-Orthodox church  commemorates as well the wedding documented in the Gospel of John. In its church, two stone jars are presented as relics, original remnants of the six purity stone jars mentioned in John 2:6.

In and around these two churches several souvenir shops offer local wine and other Christian themed memorabilia.

A tour of Cana can be combined with a day tour of the North.

Contact us to inquire more about a private tour to Cana: