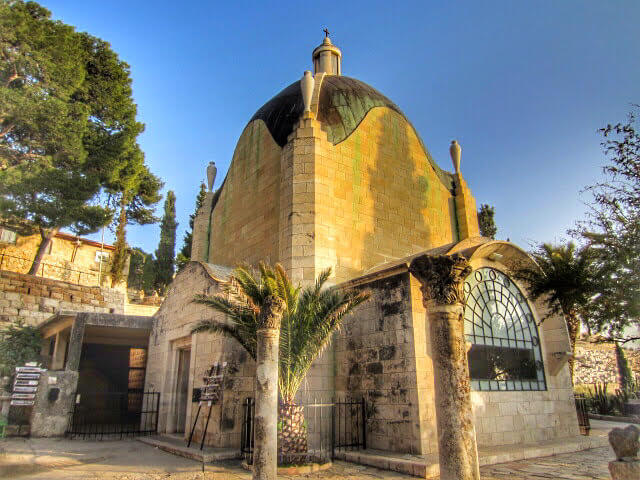 Dominus Flevit is a Roman-Catholic site on the slopes of the Mount of Olives, facing the old city of Jerusalem. The site combines great panoramas of the Temple Mount, an impressive chapel built over significant archaeological discoveries, and a significant Christian tradition.

According to the Gospels, before entering Jerusalem for the Passover, At Bethpage Jesus sent his disciples to look for a donkey and a colt to ride upon. The Gospel of Luke adds that just before his entrance, Jesus saw the city of Jerusalem, yet lamented its future destruction:

As he approached Jerusalem and saw the city, he wept over it and said, “If you, even you, had only known on this day what would bring you peace—but now it is hidden from your eyes. The days will come upon you when your enemies will build an embankment against you and encircle you and hem you in on every side. They will dash you to the ground, you and the children within your walls. They will not leave one stone on another, because you did not recognize the time of God’s coming to you.”

The reaction of Jesus to this sight was probably surprising to those with him, but his words were true – only a few decades after his crucifixion, in 70 CE, all of Jerusalem was razed to the ground by the Romans, as a punishment for the rebellion of the Jews.

Touring the Church of Dominus Flevit

The site of Dominus Flevit is maintained by the Franciscan and is open every. There is no entry fee but being a Holy Christian Site, a modest dress code is required. The modern chapel, designed by Antonio Barluzzi and completed in 1955, is shaped like a tear drop, to echo the tears of Jesus at the sight of the city. In the western wall of the chapel a large window provides an overwhelming panoramic view of the old City of Jerusalem, and especially of the Temple Mount. In and around the modern chapel, the remains of a Byzantine period mosaic floor can be seen. The mosaic is ornamented in the typical manner of Byzantine times, depicting various items in round medallions. The mosaic bear also Greek Inscriptions which contain blessing to benefactors, but do not relate to the lamentation of Jesus at this site. During the development of this site, several Jewish burial caves were recovered by the Franciscans, dating to the first century CE. Some of the burials were in small stone coffins called ossuaries. Some Franciscans scholars argue that some of these ossuaries were used for the burial of the early followers of Jesus.

A tour of the Church of Dominus Flevit can be combined wiith a guided day tour of Jerusalem.