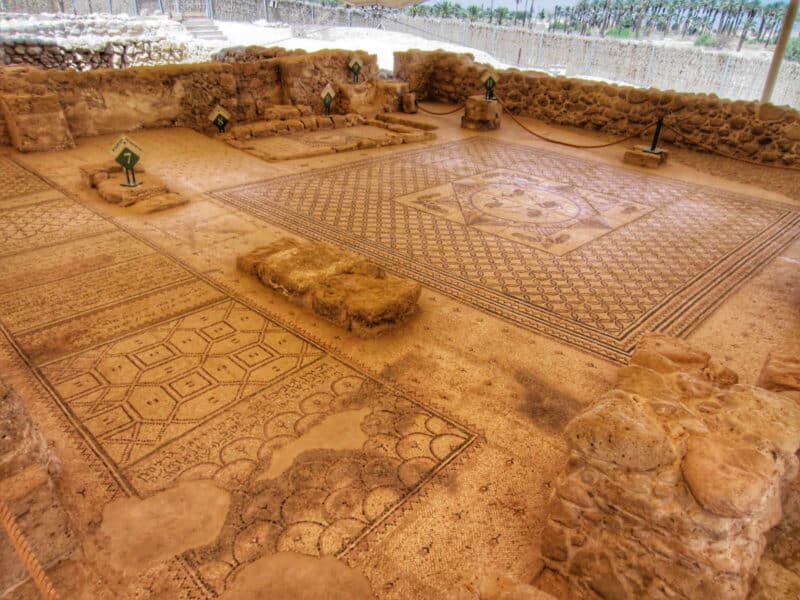 In 1965 an installation of a water pipe line by Kibbutz Ein-Gedi in its palm date grove led to the discovery of an ancient synagogue floor. Archaeologists from Hebrew University called to the scene uncovered several layers of a synagogue which functioned at the site between c. 300 to 600 CE. The excavations of the ark unearthed fragments of burnt scrolls, one of which was more intact, but completely charred. There was no way to unwrap it without it crumbling and disintegrating. Carbon 14 test indicated the scroll was from around the year 300 CE, which means the scroll was in use for about 300 years before the synagogue was burnt and went out of use. For 45 years the scroll was kept in the safes of the “Shrine of the book”, where the famous Dead Sea Scrolls are kept, but in 2015 a new and innovative research managed to read the scroll, even if only in a virtual way.

See here a fascinating video presenting the scanning of the scroll –

The breakthrough was achieved thanks to development of CAT scans, and related software. The Israeli company “Merkel Technologies” offered its professional assistance in performing high resolution 3D scanning of the Ein-Gedi scroll through their 1176 Micro-CT scanner. The outcome was then sent to Professor B. Seales from University of Kentucky, who developed a digital imaging software which allows to virtually unroll the scroll and visualize the text. The results were astonishing. Professor Seales managed to read quite clearly 8 verses from the beginning of “Leviticus” and track remains of the following 7 verses. A close reading of the text, published only recently, indicated it is identical to “Mesoratic” version of the Bible, unlike certain diversity appearing in the Dead Sea Scrolls. This is a siginificant testimony as till now no copies of the “Mesoratic” text were known prior to the 9th century (most famous is the complete 10th century “Aleppo” codex).

The Ein-Gedi scroll, dated to the 3rd-4th century CE, proves the model that the canonization of the Old Testament happened within a century or so after the destruction of the Jewish Temple (70 CE). Apparently this traumatic event in Jewish history caused Judaism, among others, to “canonize” its most sacred scriptures, and follow from that point on only one official version, called today the “Mesoratic” version.

Contact us for a private day tour of Ein-Gedi and other sites in the area.