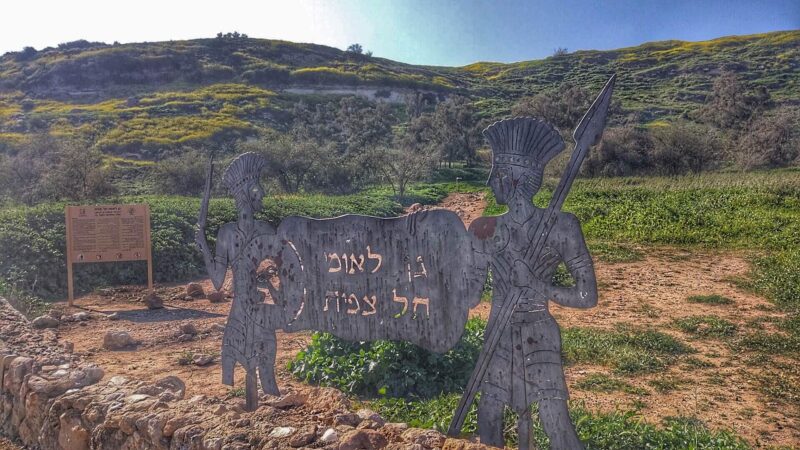 Ancient Gat (spelled also: Gath) was a one of the five main Philistine cities in the land of Israel. Its exact location has been the subject of much research and debate. Today, most scholars agree that it should be located at Tel es-Safi / Tel Tsafit.

Gat in the Bible

According to the Bible, Gat was a former city of giants (Joshua 11:22), that became one of the members of Philistine pentapolis (Joshua 13:3, 1 Samuel 6:17). The Book of Samuel records Gat hosting the Ark of the Covenant , yet as it inflicts a plague in the city they send it away (1 Samuel 5:7-10). In the days of Saul, David and Solomon Gat was reigned by king Achish, and it was also the home city of Goliath (1 Samuel 17:4). When David escaped Saul, he fled to Achish king of Gat, and to be permitted into the city he drooled at the city’s gate, pretending to be mad (1 Samuel 21:11-16). 2 Kings 12:18 provides the last mention of Gat, being conquered by Hazael, King of Aram. Apparently, Gat was never settled again. Eventually, even its location was forgotten.

The Search for Gat

No archaeological site in the southern coastal plain bears a name Gat. Being so, scholars suggested several locations for the ancient Gat. A leading suggestion, by W.F. Albright, proposed to identify Gat at Tel Erani, an archaeological site 7 miles northwest of Tel Lachish. An Israeli town and kibbutz next to the site were even named Kibbutz Gat and Kiryat Gat. However, excavations at Tel Erani proved that the site was abandoned in the 12th-10th centuries BCE, the time of the Philistines. Since 1996 an expedition from Bar-Ilan Unviersity is excavating Tel Tsafit (Arabic: Tell es-Safi), a 125 acres archaeological site with an imposing citadel. It is 3 miles east of Azekah, and 3 miles south of Ekron. This location fits well with the description of the Israelites chasing the Philistines Ekron and Gat, after David Slew Goliath: When the Philistines saw that their hero was dead, they turned and ran. 52 Then the men of Israel and Judah surged forward with a shout and pursued the Philistines to the entrance of Gath and to the gates of Ekron. (1 Sam. 17:51-52).

The excavations uncovered a wealth of finds, including of Philistine material culture, such as painted pottery, inscriptions, a philistine two horned altar, and more. The excavations also tracked evidence of the site being attacked and destroyed in the 9th century BCE, as recorded in 2 Kings 12:18.

Tel Tsafit is in in the western part of the Judean lowlands, close to the international coastal trade route (today’s highway 6). A trail rom Even Menachem reaches its northern base, where a cultic center and a gate were uncovered. A hike to the site’s summit provides stunning views of the coastal plain. It is also a good spot to read and contemplate on Gat’s significant role in the Biblical times.

A tour of the site can be combined in a guided day tour in the Judean Foothills (the Shephelah).